The Vancouver Canadians had 21 opportunities with runners in scoring position but could only muster two hits. The Eugene Emeralds were 4-for-8 in such opportunities and that’s why the defending Northwest League champions came away with a 5-2 victory to spoil Canada Day Saturday at Nat Bailey Stadium.

Dany Jimenez got the start for Vancouver and was nicked for a first inning run when Gustavo Polanco’s two-out bloop single to center field scored Aramis Ademan who had singled and advanced to second on a wild pitch.

Vancouver looked to tie it in the first when they loaded the bases with one out. Kevin Vicuna reached on an error and Kacy Clemens singled and they both moved up 90 feet on an error by Ademan at short. Riley Adams filled the bases with a walk but Bryan Lizardo struck out and Norberto Obeso grounded out.

After Jimenez stranded a leadoff walk and stolen base by Rafael Narea in the second, the C’s would tie the game when Deiferson Barreto singled and scored on a double by Mattingly Romanin. However, Romanin would not go any further as Reggie Pruitt, Cullen Large and Vicuna all flied out against Emeralds starter Matt Swarmer.

The C’s got a two-out double by Lizardo in the third but could not deliver before going down in order in the fourth.

Dany Jimenez set down nine men in a row but had to leave the game in the fifth due to injury.

Jimenez had retired nine hitters in a row but walked the leadoff man Kwang-Min Kwon before hitting Jose Gonzalez on a 3-2 pitch. Tolly Filotei looked to move the runners along with a bunt but could not do so as he fell behind 1-2 in the count. It was at that point Jimenez left the game due to injury. He was hunched over for a long time before heading to the dugout on his own.

Bobby Eveld took over on the mound and got a strikeout when Filotei’s bunt landed foul on the first base side on his first pitch. It was all downhill from there as Zach Davis singled to load the bases and Ademan followed with a two-run base hit to break the tie. A double steal, a ground out to first and another single saw two more runs cross the dish. 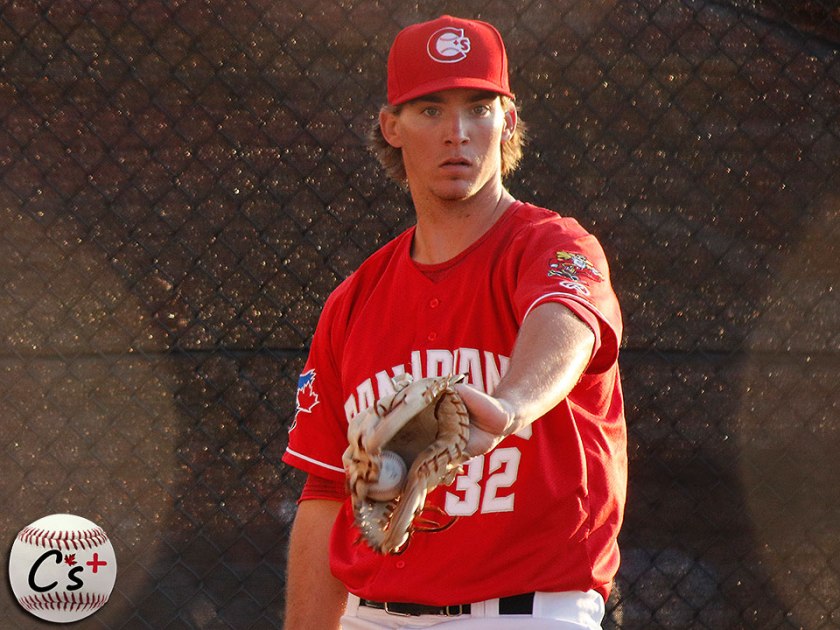 Large doubled to start the fifth but he was stranded. Matt Shannon retired the side in order to get the offence back to the plate quickly in the sixth. Lizardo reached base on a strikeout-wild pitch from Manuel Rodriguez and Barreto was hit by a pitch that left him shaken up but he would remain in the game. However, neither runner would go any further.

Chris Hall relieved Shannon in the seventh and gave up a base hit to Filotei but he was thrown out stealing by Adams at the plate. I thought Filotei was safe but the umpire thought differently. Hall then struck out the next two hitters to end the frame.

Large had another double to start the seventh and—wait for it—he would not get any further. The only difference was Clemens drawing a one-out walk. Lizardo hit a bullet up the middle but Rodriguez snared it at the mound for the final out.

Mattingly Romanin drove in both Vancouver runs on Canada Day.

Hall walked the leadoff man in the eighth but he overcame that with a couple of strikeouts to the last two hitters he faced. The C’s finally scored in their half of the eighth when Obeso singled, Barreto walked and Romanin singled off Holden Cammack to bring home Obeso. Pruitt struck out but a wild pitch allowed Barreto and Romanin to move into scoring position. Large would strike out and Vicuna grounded out to kill that rally.

Lefty Grayson Huffman kept Eugene off the scoreboard in the ninth by allowing just a two-out single. The C’s brought the tying run to the plate with one out when Adams doubled and Lizardo reached on an infield single to the mound against Andin Diaz. Even with a wild pitch to move the runners up 90 feet, Matt Morgan struck out pinch-hitting for Obeso and Barreto grounded out for the final out.

Large, Lizardo, Barreto and Romanin had two hits apiece. Clemens and Adams each had a hit and a walk. Jimenez gave up three runs over four-plus innings to take the loss but he struck out four and had five groundouts. Eveld allowed both of his inherited runners to score and allowed two more of his own despite getting two strikeouts. Shannon, Hall and Huffman combined for four scoreless frames and six strikeouts, four belonging to Hall.

The only good news came on the out-of-town scoreboard as Tri-City lost again to Salem-Keizer so the C’s and Dust Devils continue to share first place in the Northwest League North Division with a 10-7 record.

The fourth game of this series goes Sunday afternoon at 1:05 pm. You can listen to the game at CanadiansBaseball.com and TSN 1040.

A player wearing #35 was spotted in the Vancouver Canadians dugout during the game. I hope to learn the identity of this unknown soldier Sunday afternoon.

2012-2013 C’s outfielder Ian Parmley sent out this classy tweet after being designated for assignment by the Toronto Blue Jays. 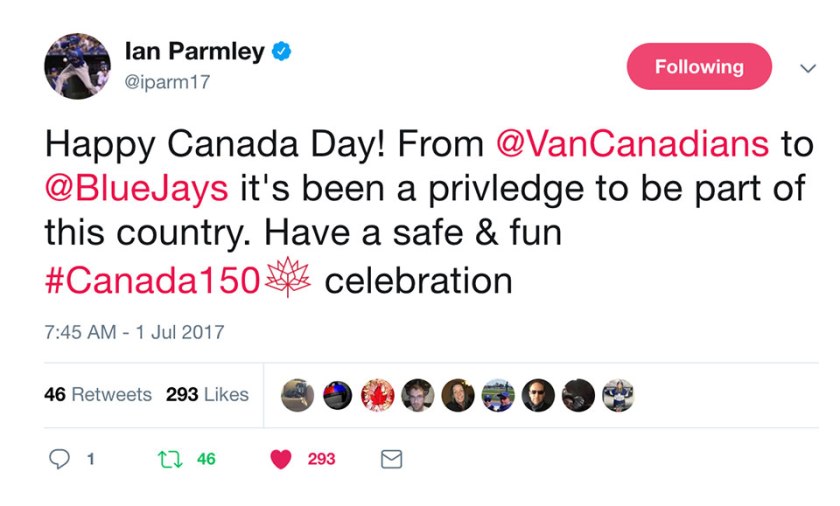 Jordan Romano and three Canadians with Vancouver ties—Dalton Pompey (2012), Panas and Tom Robson (2013, 2015)—got together for a Canada Day photo.

Not Canada Day related but 2016 C’s second baseman Cavan Biggio took time out to hang out with his number one fan in Dunedin.