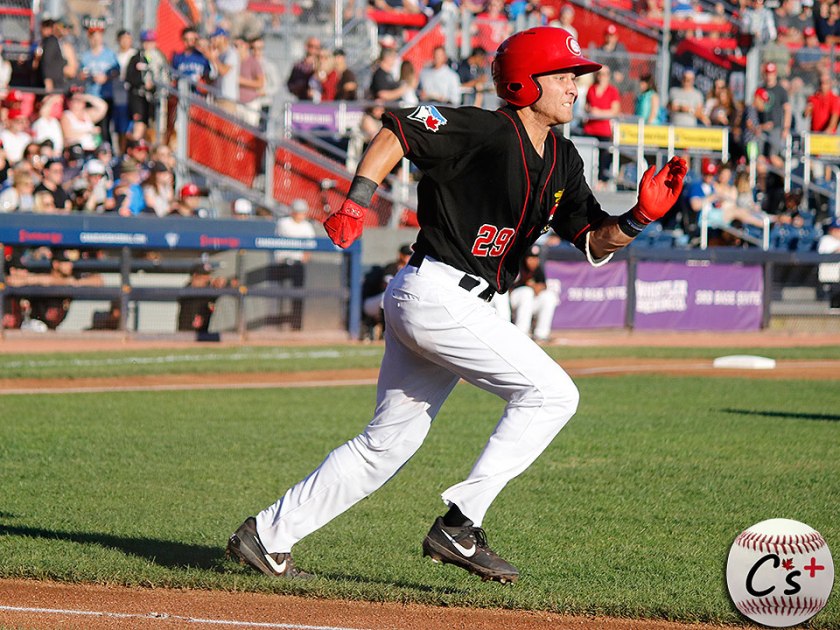 The Vancouver Canadians got back in the win column as they held off the Spokane Indians 5-3 at Nat Bailey Stadium Wednesday night, putting an end to a four-game losing streak. The victory also increased the C’s season-series lead on Spokane as they have won six out of seven contests so far in 2017. The best news of all saw Vancouver gain another game on Tri-City as the 17-11 C’s now hold a three-game lead atop the North Division. The Dust Devils were defeated again Everett Wednesday to fall to .500 on the season at 14-14.

Donnie Sellers got the starting assignment for the Canadians and he gave up a single to left from Miguel Aparicio to begin the game. Sellers’ batterymate Riley Adams would take care of Aparicio as he threw out Spokane’s leadoff hitter trying to steal second. The throw resulted in Logan Warmoth‘s first putout with the C’s as he covered the bag from his shortstop position and slapped the tag on Aparicio. Chad Smith was called out on strikes for the second out before Tyler Ratliff extended the inning with a base hit to left. Sellers would get Andretty Cordero swinging to put up a zero on the scoreboard.

Logan Warmoth hustles down the first base line to pick up an infield single in the first.

Reggie Pruitt flied out to center to start the Vancouver first but Cullen Large drew a walk before Warmoth picked up an infield single to third in his first at-bat with the C’s. That brought Adams to the plate and he fell behind 0-2 in the count to Alex Speas on a swing and a miss and a foul ball. Adams would not miss the next pitch as he drilled it over the left field fence and into the Home Run Porch to give Vancouver a 3-0 lead. 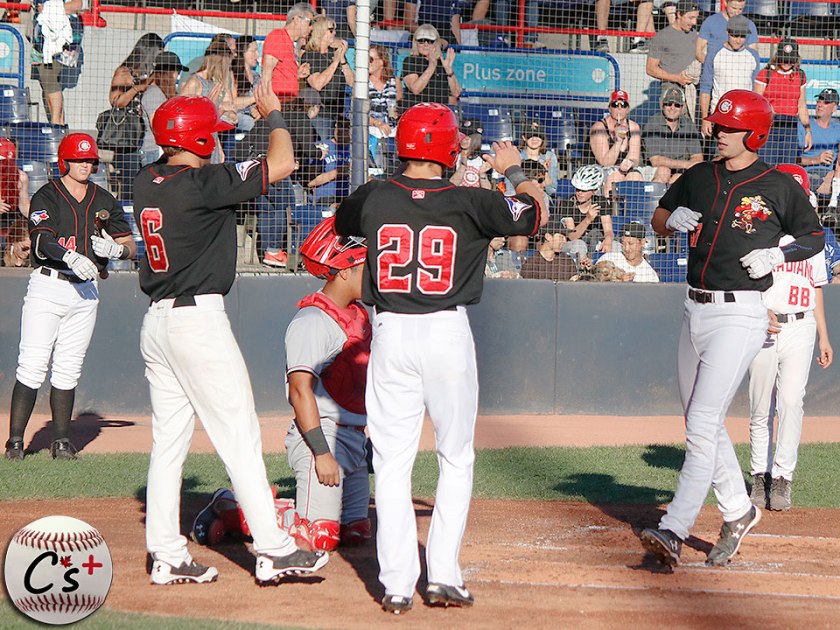 After Kacy Clemens flied out, David Jacob singled and Brock Lundquist walked but Deiferson Barreto grounded out to the mound for the final out of the first.

Sellers received more good defence to start the second when Pruitt robbed Matt Whatley of extra bases with a diving catch towards the warning track near the manual scoreboard. Sellers would then ring up Kole Enright on strikes and get Kobie Taylor swinging to put the C’s back on offence.

Brandon Polizzi singled in his first Nat Bailey Stadium plate appearance and would later score on a balk.

Brandon Polizzi went back up the middle for a base hit to start the Vancouver second and he scampered over to third on a double by Pruitt. A balk by Speas allowed Polizzi to score the C’s fourth run and move Pruitt to third. A sacrifice fly by Large would plate Pruitt to make it 5-0 for the home side. Adams singled for his second hit in as many innings but that was it for the offence in that inning and for the rest of the game as it turned out.

Sellers helped himself out by fielding a ground ball at the mound to throw out Yonny Hernandez in the top of the third. He gave up another hit to Aparicio but struck out Smith and was one strike away from getting out of the inning. Ratliff spoiled that plan with a double to right to score Aparicio with the Indians first run. That was it for Sellers as he made way for Chris Hall.

Hall’s first pitch was a hanging curve and Cordero did not miss it as he launched a two-run homer to left to cut Vancouver’s lead to 5-3. Hall’s second pitch wound up on the person of Whatley to bring the tying run to the plate but two pitches later, Melvin Novoa flied out to end the rally.

Joe Barlow relieved Speas in the third and limited the C’s to a two-out base hit from Barreto but he was gunned down by Novoa trying to steal second for the final out. Hall was able to work the kinks out from the third inning as he struck out the side in the fourth with Enright and Taylor going down swinging and Hernandez caught looking.

Vancouver had a prime opportunity to add to their lead in the bottom of the fourth when Polizzi electrified the crowd with a leadoff triple. Pruitt would join him on base when he battled his way aboard with a 12-pitch at-bat that resulted in a walk. Pruitt then took for second for his 10th stolen base of the year. Large and Warmoth could not put the ball in play as they struck out. Adams extended the inning with a walk to pass the baton to Clemens, who worked the count full and hit the ball hard to center but Aparicio made the catch as the C’s left them loaded.

Hall would set down Spokane in order in the fifth, sixth and seventh innings. The C’s could only get a base hit from Jacob, a hit by pitch from Large and a Clemens walk over those three frames. Jacob broke his bat on his fifth inning single and the next hitter Lundquist would break his lumber on a popup to third. 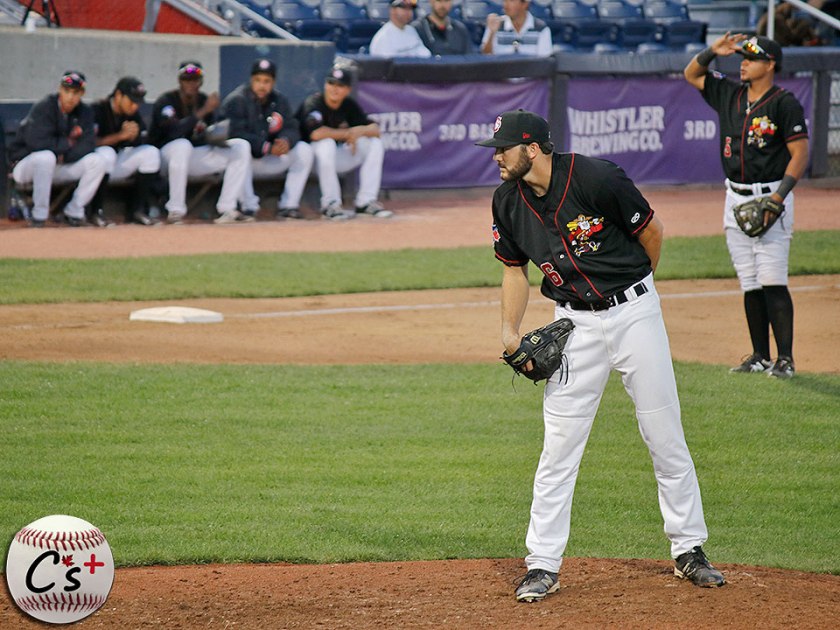 Jake Fishman picked up his second hold with a shutout eighth inning.

Jake Fishman relieved Hall in the eighth and had to answer the bell defensively by fielding a bunt in front of the mound and retiring the speedy Aparicio for the first out. Fishman then struck out Smith looking and that led to the ejection of Spokane hitting coach Chase Lambin. Home plate umpire Anthony Warner gave Lambin the heave-ho as Lambin was walking back to the dugout. Once Lambin realized he was thrown out, he ran back to Warner to give him another piece of his mind. Fishman would get Cordero to ground into a fielder’s choice at second to escape that jam.

Polizzi earned a one-out walk against Indians reliever Argenis Rodriguez and stole second in the home half of the eighth. He went to third on a Pruitt groundball but was stranded when Large lined out to short.

William Ouellette came into the game for the ninth and Adams chased down a foul popup behind the plate to retire Whatley for the first out. A flyout to left by Novoa and a flyout to center by Enright would give Ouellette his third save of the year and would put the C’s back in the victory line for the first time in six days.

The Vancouver hit leaders were Adams, Jacob and Polizzi with two apiece. Adams and Polizzi also reached with a base on balls. Every C’s hitter did get on base at least once. They went 1-for-7 with runners in scoring position and left nine men on base but that hit was a big one with Adams’ three-run homer.

Sellers struck out five to match the five hits he allowed over 2-2/3 innings. Hall whiffed four in 4-1/3 innings and Fishman had one to give C’s hurlers a K/BB ratio of 10-0.

I was remiss in not including the radar gun readings for the series opener Wednesday so here they are.

Thursday’s game was the annual Dog Day of Summer event as 343 dogs were in attendance for this one along with the announced total of 6,383. The only time I heard them barking was during ‘O Canada’.

The home run by Adams was the second Vancouver home run to find the seats of the left field Home Run Porch this season. The first was by fellow catcher Matt Morgan.

According to the press notes, Vancouver had the second most runners left on base in the Northwest League heading into Thursday with 212. That total is now 221.

Zach Logue is one of many 2017 Blue Jays draft picks on the C’s roster.

Other press note nuggets include Cullen Large hitting .333 during a seven-game hit streak but that came to an end Thursday. He did reach twice on a walk and a hit by pitch. Also, the arrivals of Logan Warmoth and lefthander Zach Logue mean there are now 10 2017 Toronto Blue Jays draft pick on the Vancouver roster.

Here are the others…

Another new name is on the latest version of the team roster in 20 year-old outfielder Freddy Rodriguez. The Venezuelan has yet to play in 2017 after spending 2014 and 2016 with the Gulf Coast League and 2015 with the Bluefield Blue Jays in between. No uniform number has been assigned and there is no transaction listed on the Northwest League website as of this point.

Looking at the Alumni Report…

The C’s conclude this three-game set with a 1:05 pm first pitch Friday afternoon. TSN 1040 and CanadiansBaseball.com will carry the game. The homestand will continue Saturday with the first of five games against the Hillsboro Hops.