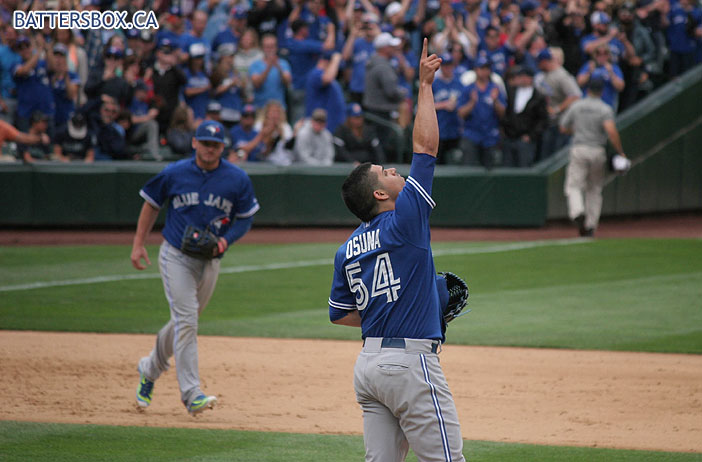 Well, it’s been too long but I hope to make more posts to this site in 2016. Of course, I said the same thing last year but life always gets in the way. Translation – I’ve been lazy! Anyways, this post will deal with the final two games of a weekend series in Seattle that my girlfriend and I attended last year.

Thanks to StubHub, we snared a couple of seats just a few rows above the Seattle dugout on the first base side. I wanted to get that side of the field because of the predominance of right-handed hitters in the Jays lineup. Toronto dropped the series opener to Felix Hernandez on a Friday night, besting Marco Estrada after his start was pushed up a day because Drew Hutchison was under the weather. Hutch got the start instead on a cloudy Saturday afternoon and the first inning was not very promising at all.

Hutchison loaded up the bases in the first inning on three straight singles by Austin Jackson, Kyle Seager and Nelson Cruz and despite facing seven hitters, he managed to limit the damage to one run, a sacrifice fly by Seth Smith. In contrast, former Jay J.A. Happ had an easy 1-2-3 first inning on nine pitches but he would not get out of the second. Chris Colabello and Russell Martin would walk and Colabello slid across with the first run on an RBI knock by Danny Valencia. Bases-loaded walks by Devon Travis and Josh Donaldson brought in Martin and Valencia to make it a three-run inning. Vidal Nuno struck out Jose Bautista with the bases loaded to end the threat.

Any hopes that Hutchison would settle down in the second inning were quickly dashed when .036-hitting Jesus Sucre, aka “Sweet Jesus”, went deep to left for the first time in his major league career. He would give up another run in the third after Robinson Cano reached on an error by Travis and eventually score on a Logan Morrison fielder’s choice to even up the game at 3-3. Hutch would get the “Sultan of Swat” Sucre and Austin Jackson to ground out to begin the fourth but hopes for a 1-2-3 inning were dashed on a Seager single and a Cruz hit by pitch. The dream of a scoreless inning then died when Cano crushed one to left to give Seattle a 6-3 lead.

Mercifully, Liam Hendriks came on to settle things down out of the bullpen but Nuno also did his part for Seattle with 3-1/3 scoreless frames. The Jays were glad to see Nuno leave after the fifth in favour of Tom Wilhelmsen and they inched closer with a two-out rally on back-to-back doubles by Travis and Jose Reyes. After Brett Cecil overcame a lead-off single to set down the Mariners in the seventh, the offence got back to work as Russell Martin worked a leadoff walk off Fernando Rodney before pinch-hitter Ezequiel Carrera came off the bench to crush a two-run homer to tie the game at 6-6. The Fernando Rodney Experience(TM) was enjoyed by Blue Jays Nation but not so much by the Mariner faithful, who saw way too many of the former fake arrow-shooting closer’s implosions over the course of the season.

The Blue Jays then turned to 2011 C’s hurler Aaron Sanchez, who was coming off the disabled list after a strained lat muscle sidelined him for over a month. I had my reservations about this after Sanchez looked shaky during a rehab stint at Triple-A Buffalo. The California kid threw smoke out the pen, reaching 98 and 99 miles per hour, and allowed just an infield single to Chris Taylor to post a zero in the eighth.

Carson Smith was called on to face the heart of the Toronto order in the ninth and ran into trouble immediately by walking Donaldson and surrendering a double to Bautista. Edwin Encarnacion was given an intentional pass and Colabello made the Mariners pay with a two-run single up the middle to give the Jays an 8-6 lead. 2012 C’s pitcher Roberto Osuna was called in to close things out and managed to get around a two-out walk to Cano by striking out Franklin Gutierrez swinging to preserve the come-from-behind win.

To demonstrate the literary technique called foreshadowing, Gutierrez would also have the final at-bat the next day in the series finale.

The rubber match of this series saw veteran lefty Mark Buehrle go to the hill against Taijuan Walker in a rematch of a September 2014 game that saw the Jays deal the M’s a fatal blow in their playoff bid with a 1-0 win at the SkyDome. This game had lots of interesting twists and turns and all sorts of weird things happening.

In another overcast and gloomy day in Seattle, Josh Donaldson brightened things up for the visiting fans by slamming a ball over the left field wall for a 1-0 lead in the first. The Mariners would get that one back as Austin Jackson led off with a solo blast off Buehrle to tie things at 1-1.

The Jays would regain the lead in the top of the second with a three-run rally. Former Mariner Justin Smoak started it up with a single and would lumber over to third on a Russell Martin double. Smoak would score on a balk by Walker and Ezequiel Carrera singled home Martin to make it 3-1. Donaldson plated home another with a sacrifice fly to put Toronto up by three.

Buehrle put together a shutdown second inning but had trouble with the bottom of the Seattle order in the third as Brad Miller and Mike Zunino both singled and they would score on base hits by Jackson and Nelson Cruz to bring Seattle to within a run. I was frustrated with the Cruz blooper to left field as it appeared from my vantage point that it eluded Jose Reyes at short. Rightly or wrongly, I felt a real shortstop could have made a play on it and Reyes’ defence was getting harder and harder to stomach.

Toronto tried to get back on the scoreboard in the fourth and were in a good position to do so after base hits by Ezequiel Carrera and 2011 C’s outfielder Kevin Pillar put runners at the corners and nobody out. Number nine hitter Ryan Goins then hit into a triple play after Pillar and Carrera wound up at third base and were tagged out by Zunino. It appeared third base coach Luis Rivera tried to shove Carrera toward home, causing Carrera to fall down and get tagged out to complete a 3-6-2 triple play. When it comes to third base coaching, Rivera is no Brian Butterfield. It also bugged me Rivera was wearing #2, my favourite number. I hate the fact managers and coaches wear numbers. Makes no sense.

Walker found his groove after that play by striking out the side in order in the fifth and erased an Edwin Encarnacion leadoff walk in the sixth with a double play ball and a strikeout in the sixth. Buehrle tried to get out of the sixth but an error by Donaldson at third extended the inning and led to Bo Schultz coming into the game. Schultz nearly gave up a two-run homer to Zunino but he was robbed by Carrera who made a leaping catch in left field. Things looked even more promising when Carrera followed up with his second home run in as many days off former Blue Jays farmhand and 2011 C’s pitcher David Rollins to start off the seventh.

Schultz was entrusted to preserve the lead in the seventh and well, he didn’t! A one-out walk to Kyle Seager lit the dynamite for Cruz, whose boomstick produced a two-run bomb to tie the game at 5-5. It was in this inning the roof at Safeco Field was closing because of rain and it felt like the Jays’ chances of winning this one were getting darker.  Schultz was able to bounce back with back-to-back K’s of Robinson Cano and Franklin Gutierrez with offerings ranging from 88-98 MPH but the damage was done.

Aaron Sanchez looked much sharper with two K’s in a perfect eighth inning and the Jays tried to give Sanchez an opportunity to record his second straight victory in as many days when two-out singles by pinch-hitter Devon Travis and Reyes put runners at the corners against soon to be Blue Jays reliever Mark Lowe. Unfortunately for the Jays, Donaldson would ground out to end the threat. Looking back, I wondered whether Travis should have played instead of Goins, who hit into that momentum-turning, soul-crushing triple play.

Ryan Tepera was summoned to pitch the ninth for Toronto and ran into trouble immediately in the form of a Zunino leadoff single. Tepera needed 21 pitches to get out of the nervous ninth, with the key moment being a Kyle Seager flyout to center after an eight-pitch at-bat.

Lefty Joe Beimel pitched the 10th and he managed to set down the right-handed hitting heart of the order in Jose Bautista, Edwin Encarnacion and Chris Colabello. Fernando Rodney was warming up for presumably the 11th inning but it was up to lefty Aaron Loup to get the Jays there.

Loup was summoned to deal with the left-handed hitting Cano and the game ground to a halt when Cano lined a foul ball off third base umpire Jim Joyce. That led to a delay in the action and the eventual departure of Joyce. There was also a replay on whether or not the ball Cano hit was fair or foul. When action resumed, Cano would ground out to second for the first out on a full count. Unfortunately, Loup had to face the right-handed hitting Gutierrez and righties had owned Loup all year. The sidewinding lefty tried to buck that trend by getting ahead of Gutierrez 0-2. Of course, the next pitch was crushed over the center field fence to give the M’s a walk-off 6-5 victory.

It was a disappointing end to an otherwise thrilling game and weekend overall. It was a playoff-type atmosphere even though the Mariners were under .500 at 46-53 and the Jays fell back to sea-level with the loss at 50-50. Even though Seattle fans would disagree, it was great to see Blue Jays Nation represent at Safeco Field and it was great that it was a weekend series for a change. However, the two teams will be playing midweek games at Safeco Field in September this year. It’s too bad the Jays don’t have Paul Beeston around anymore. It’s believed he made the push for the schedule makers to have Seattle host a weekend set with Toronto before the 2015 docket came out. Oh well, I’m sure there’ll be lots of Blue Jay blue in the stands when September rolls around, hopefully as the Jays drive to repeat as AL East champions.