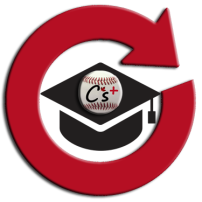 It’s early days yet in spring training but former Vancouver Canadians lefty Tim Mayza is servicing notice that he would like a role in the 2017 Toronto Blue Jays bullpen. The 6-foot-3, 220-pound southpaw tossed a shutout inning in Wednesday’s 5-4 loss to Detroit in Dunedin. The only blemish on Mayza’s line was a ground ball single to left by Justin Upton with two-outs in the third. He threw nothing but strikes as he whiffed Andrew Romine and Steven Moya swinging while getting Tyler Collins to ground out. The Tigers decided to come out swinging as they swung away at all of Mayza’s eight pitches, resulting in five swings and misses, one foul ball, one groundball out and Upton’s single.

Joshua Howsam of Baseball Prospectus Toronto tweeted Mayza “was just sitting at 96, touched 98 a couple times, and flashed a 90 mph wipeout slider.” That’s two scoreless frames and four K’s so far this spring for the 12th round pick out of Millersville University of Pennsylvania in 2013. 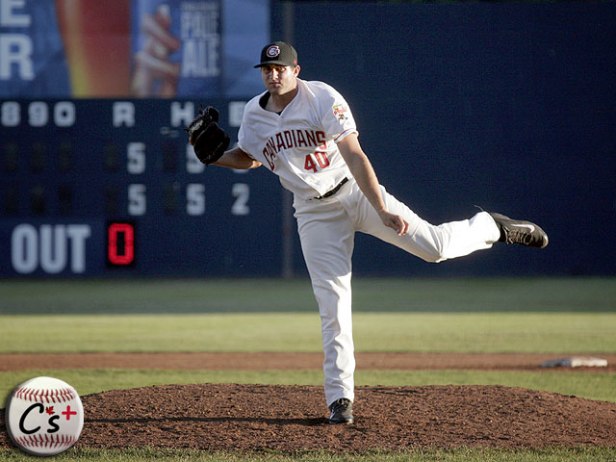 Tim Mayza was a member of the Vancouver Canadians bullpen in 2014.

Mayza began his pro career in 2013 with stops at the Gulf Coast League and Bluefield where he had a composite 1-4 record and a 7.76 earned run average in 13 appearances, five of them starts. He did post a promising 10-2 K/BB ratio in the GCL in just seven innings but he walked 10 while whiffing 17 in 22 frames in Virginia.

The 2014 season saw Mayza report to Vancouver and his debut with the C’s was a good one as he posted three shutout frames of one-hit ball, striking out three and walking one to  earn the victory in the C’s 5-3 win in Oregon June 15. Unfortunately, things did not go nearly as smoothly the rest of the way. He suffered the loss in two of his next three appearances and he enjoyed just one more scoreless outing in his 12 appearances before being sent back to Bluefield in early August. Mayza finished up his time in Vancouver with a 2-3 record with a 6.75 ERA, striking out 17 and walking 12 in 20 innings. He didn’t find his form in Bluefield either as he recorded another 6.75 ERA in his four appearances with the Bluef-Jays.

The one thing that stood out about Mayza to me was his ability to throw hard as I do remember him hitting 95 MPH on the radar gun at Nat Bailey Stadium along with some offerings at 93 and 94. Hard-throwing lefties are such a precious commodity so you had to figure the Jays would remain patient with the Allentown, Pennsylvania native.

That patience began to pay off in 2015 when Mayza struck out 62 batters in 55-2/3 innings with Lansing while winning three of five decisions and putting up an ERA of 3.07. More impressively, nobody took him deep. Keegan Matheson from Jays Journal noted Mayza did have to deal with some adversity early on.

After opening 2015 with the Lansing Lugnuts, Mayza was sent to extended spring training after making just one appearance as the organization juggled rosters in the lower minors.

Mayza treated the trip back to extended spring as an opportunity to improve, telling Matheson “walks were kind of an issue and as my confidence was able to build I was able be more confident around the strike zone which eventually would help me when I went back to Lansing.”

Mayza also spoke to Brian Crawford of Baseball Essential, elaborating on what he wanted to accomplish during his time in extended spring.

Mayza told Crawford his repertoire consists of a four-seam fastball, a two-seam fastball and slider as the pitches he throws while also trying to hone a changeup.

“I want to develop a fourth pitch to help me have more options in certain situations. Obviously a fourth pitch would help me keep hitters off-balanced. When you only throw three, hitters have a better idea of what you’re going to throw in certain counts, so I want that option to keep hitters guessing more and put a crinkle in their minds.”

2016 saw more positive gains for Mayza. He began the year in Dunedin where he limited Florida State League hitters to a .201 batting average, resulting in a 2-0 record and 1.66 ERA. He struck out 52 batters in 48-2/3 innings. Mayza was selected to the Florida State League All-Star game where he pitched a scoreless inning that included one hit, one walk and one strikeout. He was credited with a hold in the North Division’s 1-0 victory over the South in Fort Myers.

Mayza was promoted to Double-A New Hampshire and he had struggled to a 1-3 record and a 4.11 ERA. Walks were a huge issue as he handed out 15 ball-fours in 15-1/3 innings, offsetting 13 strikeouts.

Still, the Jays indicated what they thought of Mayza when he was sent to the Arizona Fall League last October to match up against other top prospects from around the majors.

Mayza will more than likely begin 2017 again back in New Hampshire with an eye of moving up to Triple-A Buffalo if things go well. He was part of the Bisons Hot Prospects showcase in January so perhaps a strong spring training performance could vault him to New York State.

If the 25 year-old Mayza keeps up anything approximating his rate of two K’s per shutout innings, he’ll be in Toronto before too long.