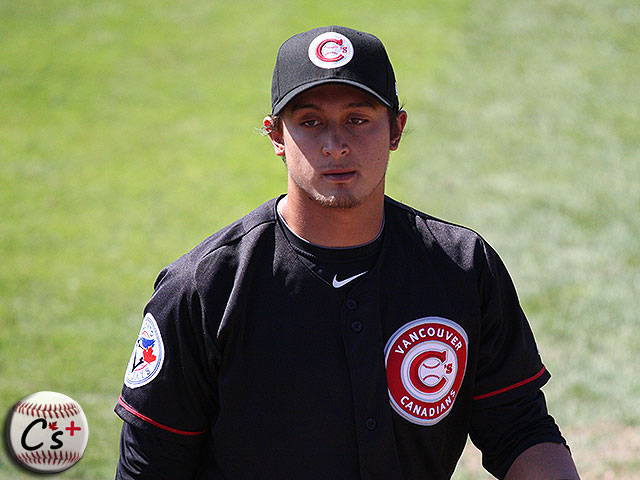 Richard Urena, Lourdes Gurriel Jr. and Bo Bichette are receiving top billing as the Toronto Blue Jays best middle infield prospects these days but Christian Lopes could enter the picture sooner than you think. The former Vancouver Canadian hit a ground-rule double and scored the Jays final run in an 8-2 loss to Philadelphia at Dunedin in Grapefruit League action. So far, Lopes is 2-for-4 this spring.

Lopes began the 2016 season in Dunedin and despite a .196 batting average in April, he drew 11 walks to push his on-base percentage to .324 and showed some pop with a .411 slugging percentage thanks to three home runs, a double and a triple in 56 at-bats.

Promoted to New Hampshire for the second year in a row, Lopes had a few more balls fall in safely as he upped his batting average 99 points while seeing an uptick in OBP at .357. He kept his slugging percentage a tick above .400. He put together an 8-game hitting streak and a 12-game on-base in June and followed that up with a hitting and on-base streak of 7 and 9 games respectively. He had a career-high four hits, including two doubles, on June 22 in Erie in a 5-4 Fisher Cats victory.

After seven multi-hit games in July, Lopes kept on keeping on in August. He beat up on Erie again with another four-hit game to help New Hampshire beat the SeaWolves 7-4  August 7. That was part of a 14-game hitting streak with the back half of the hitting streak containing seven straight games of two hits or more. The right-handed hitting Lopes did not have a big platoon split with a .761 OPS versus righties and a .750 mark against lefties.

Batter’s Box rated Lopes as the Blue Jays #21 prospect and provided this rundown on Lopes’ abilities.

Reportedly, he has strong instincts and good hands at second and can play at least average defense there. But his below-average arm strength and reaction times appear to have limited any chance he’d continue to play shortstop.

If he is to make the majors, Lopes will need to hit enough to be a starter at second base or add the ability to play at least one more position. In these days of deep bullpens, it’s not practical to carry a second baseman on the team’s bench.

Lopes has good hip rotation and a short, compact swing that gets his bat through the strike zone quickly. He isn’t a fast baserunner, as evidenced by his stolen base totals. He has strong makeup and good peripherals, given his low strikeout walk and reasonable batting eye.

Bluebird Banter listed Lopes as the 30th best Blue Jays prospect while MLB.com did not place him in its ranking.

Lopes now has a younger brother in the Jays minor league system as Tim Lopes, also a second baseman, was acquired from Seattle for switch-pitcher Pat Venditte last September.

Christian Lopes was a seventh-round pick of the Blue Jays in the 2011 amateur draft out of Edison High School in his hometown of Huntington Beach, California and received a signing bonus of $800,000. Even though he didn’t make his professional debut in 2011, Baseball America still rated him the 29th best prospect in the Jays system.

He began his pro career in 2012 with the Bluefield Blue Jays with a bang, homering in his first career at-bat in a 7-2 road victory over the Bristol Pirates June 19. Four days later, Lopes homered and tripled to help the host Blue Jays beat the Johnson City Cardinals. Splitting time between second and short, he established a 13-game on-base streak that included nine in a row with a hit in July. Lopes ended his Bluefield tenure with hits in his last four games and left Virginia with a slash line of .280/.343/.484 performance with Bluefield. He carried over his hitting streak with Vancouver by recording hits in his first four games upon his promotion August 21.

His C’s debut came August 22 against Boise and he made an immediate impression on the fans at Nat Bailey Stadium with two singles in his first two at-bats. He also contributed a three-hit game in the historic Game 1 victory against Boise in the Northwest League final. He finished his Vancouver tenure with a .270/.317/.351 batting line and made just one error in 52 chances at second base. Lopes won the R. Howard Webster Award as Bluefield’s top minor leaguer.

The 2013 season saw the 6-foot-0, 185-pound Lopes report to Lansing and he earned Midwest League mid-season All-Star honours. The right-handed hitter reached career highs with five home runs and 66 runs batted in but only hit .245 with an OPS of .644. Lopes spent 2014 in Dunedin and turned in a .243 batting average with a .679 OPS. His 2014 campaign continued in Australia and he provided some thunder Down Under by slashing .361/.414/.555 with five home runs and 22 RBI in 133 plate appearances with the Canberra Cavalry.

His second season with the D-Jays in 2015 went much better as he hit .293 while compiling an OPS of .750. He was called up twice to New Hampshire but struggled with a .174 batting average and slugging percentage with an OBP of .264 in 92 at-bats.

However, Lopes’ resurgence with the Fisher Cats last season would appear to put him in line with his first exposure at Triple-A with the Buffalo Bisons in 2017. If all goes well with the Herd, the 24 year-old could find himself in Toronto before the year is out.