Jason Leblebijian is the Buffalo Bisons’ leading slugger over the first 10 games of the season.

Buffalo Bisons are off to a good start in 2017 with seven wins over their first 10 games and a big reason why has been the play of 2012-2013 Vancouver Canadians infielder Jason Leblebijian. The 25 year-old Arlington Heights, Illinois native leads the Herd with three home runs and 10 runs batted in. One of those dingers and four of those ribbies came Saturday in Buffalo’s 10-2 victory over the defending International League champion Scranton/Wilkes-Barre RailRiders. The right-handed hitting third baseman is batting .367/.457/.700 but he does need to cut down on the strikeouts as he has whiffed nine times in 30 at-bats. So far, Leblebijian is carrying over his solid season of 2016 when he hit a combined .294 with Dunedin and New Hampshire.

Fellow 2012 C’s alumni Dwight Smith Jr. followed Leblebijian’s eighth-inning three-run blast Saturday with one of his own in the ninth, his first homer at the Triple-A level. The 24 year-old is hitting .265/.342/.412 , numbers that are fairly similar to his 2016 performance in Double-A in which he batted .265/.332/.433. It’s still early but the left-handed hitting Smith is looking to tap into some more power to work his way into the Blue Jays outfield picture.

2012 and 2013 C’s outfielder Ian Parmley has put together a slash line of .304/.407/.304 line in eight games but has been hitless in his past three. The 27 year-old left-handed hitter from Snohomish, Washington is getting on base so far but has not stolen any bases as of yet.

2014 Vancouver Canadian Rowdy Tellez homered twice on Opening Day at Coca-Cola Field but has fallen on hard times to the tune of a .206 batting average with those two homers serving as his only extra-base hits so far in 2017. The 22 year-old left-handed hitter has walked three times against eight strikeouts in 34 at-bats.

2012 C’s infielder Christian Lopes hit a walk-off home run during the season’s opening weekend but like Tellez, is now batting just .206. He has walked just once and is only slugging .292.

2011 Vancouver Canadian Shane Opitz was yo-yoed around last week, getting assigned to extended Spring Training when infielder Ty Kelly was activated. However, he was called back up to Buffalo because of Josh Donaldson‘s calf injury that led to Chris Coghlan being summoned to Toronto. He has received just eight at-bats so far with Buffalo with a two-run single accounting for his lone hit of the young season.

Matt Dermody was rewarded with an early-season call-up to Toronto Sunday.

On the mound, Matt Dermody drew the attention of Blue Jays brass by striking out all five Rochester Red Wings he faced, all of them swinging, to earn his first Triple-A victory April 12. The 2013 C’s lefty was called up to Toronto over the weekend after 2011 Vancouver Canadians hurler Aaron Sanchez was placed on the disabled list with a blister on his right middle finger. Unfortunately, the 26 year-old from Norwalk, Iowa was hit around by the Baltimore Orioles in his 2017 debut with the Blue Jays on Sunday. Dermody had a 5.79 ERA with the Herd over two appearances but his K/BB ratio was 7-1. 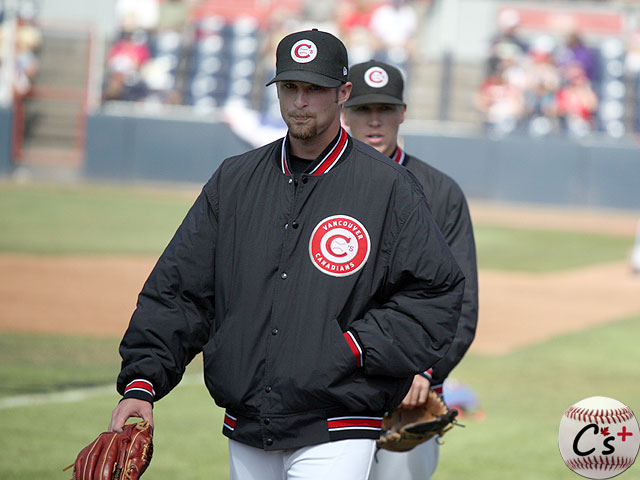 Wil Browning has two victories in three appearances with Buffalo in 2017.

Sidearming righthander Wil Browning from the 2012 Canadians has earned the win in two of his three appearances with Buffalo resulting in his first two victories at the Triple-A level April 9 and April 14. The 28 year-old from Sallis, Mississippi pitched a combined three shutout frames to get the victories over Scranton/Wilkes-Barre but was roughed up by Rochester for three runs over two innings April 11. Browning has struck out five over five innings but has walked a pair and plunked a batter to go along with an ERA of 5.40.

The Bisons are hoping the Vancouver eight will continue to do their part to help them earn their first playoff berth since 2005.