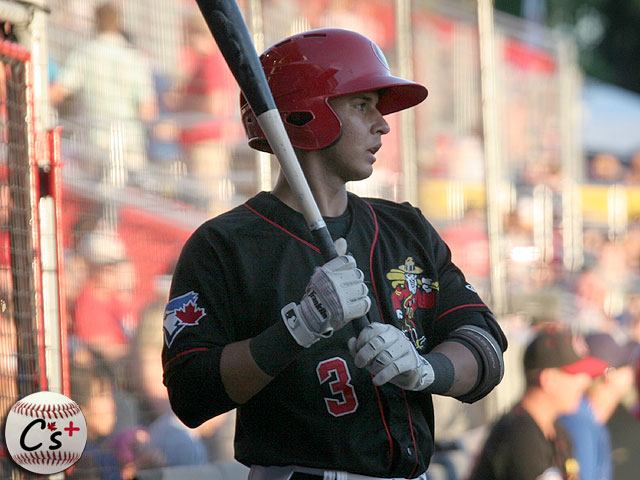 Yeltsin Gudino has reached base in 17 straight games for the Lansing Lugnuts.

Yeltsin Gudino has always shown the ability to pick it but now he’s starting to hit it too. The 2016 Vancouver Canadians shortstop is enjoying his greatest success with the stick with the Lansing Lugnuts this season by going on a 17-game on-base streak. That includes a four-game stretch in which he had two hits per game, including his first Midwest League home run against the Bowling Green Hot Rods on the road April 28.

FanGraphs shows the 20 year-old Gudino has been able to put the ball in play more, striking out just over 11 percent of the time – an improvement of nearly eight percent from last season. The increase in contact has come with a decrease in walks as he has heard ball four just over eight percent of the time, that’s down from nearly 13 percent in 2016. Still, Gudino’s on-base percentage is 94 points ahead of his batting average so his good batting eye is still in his arsenal. So far, he’s hitting .255 with two doubles and 11 runs batted in.

Gudino is not exactly crushing the ball with a line drive rate just above 10 percent but hitting for power is not his game and it appears it never will be, despite having gained 30 pounds over the years on his 6-foot-frame to weigh in at 180. He is using more of an up-the-middle approach at the plate with 24 percent of the balls he has hit put into play going to center field, which is up from the 15-16 percent range over his first three years in the pros.

Yeltsin Gudino has played second base in addition to shortstop with Lansing this year.

Defensively, Gudino has been splitting time at shortstop and second base with Bo Bichette this season. He’s taken well to his first exposure at the keystone by making just one error in 66 chances. Things haven’t gone quite as smoothly at the six-spot as he has committed eight errors but has a range factor above five, a slight improvement from last year in Vancouver according to Baseball-Reference.

An international free agent signing by the Toronto Blue Jays from the Carlos Guillen Baseball Academy in Venezuela, Gudino signed on July 2, 2013 for $1.29 million. He drew attention to himself by hitting .458/.611/.833 at the 15U World Championship in Mexico in 2012. Rated the No. 8 international prospect by Baseball America at the time of his signing, scouts praised his smooth defence and his contact skills with a simple right-handed swing. In BA’s 2017 Prospect Handbook, Gudino is ranked 27th in the Blue Jays system and is described to have an average arm with good footwork and instincts.

Gudino has come a long way from his debut season in the pros when he had an isolated slugging percentage of .022 with the Gulf Coast League Blue Jays in 2014. The Maracay, Venezuela native remained below the Mendoza Line with Bluefield in 2015 but collected his first and only professional home run that season.

Yeltsin Gudino overcame a slow start with Vancouver to post a .338 on-base percentage in 2016.

Gudino’s tough times continued with the C’s in 2016, hitting just .139 in his first 10 games and making a good chunk of his 22 errors in the first half. However, he improved as the year went on he put up an on-base percentage of .375 in July that included a four-hit, one-walk performance against the eventual Northwest League champion Eugene Emeralds July 25. He kept getting on base in August with a .350 OBP in August and he finished up strong by hitting .308 in his final 10 games of the year.

In an interview with Lansing Lugnuts broadcaster Jesse Goldberg-Strassler in late April, Gudino revealed he became a father when his wife gave birth to a baby boy in Tampa, Florida during the off-season.

As the linked audio shows, Gudino is fluent in English after taking three years of classes from the Blue Jays and learning from his teammates.  He has adopted the attitude of not being afraid of making mistakes in conversations because he’s learning.  Those are definitely words to live by for Gudino, on and off the field.