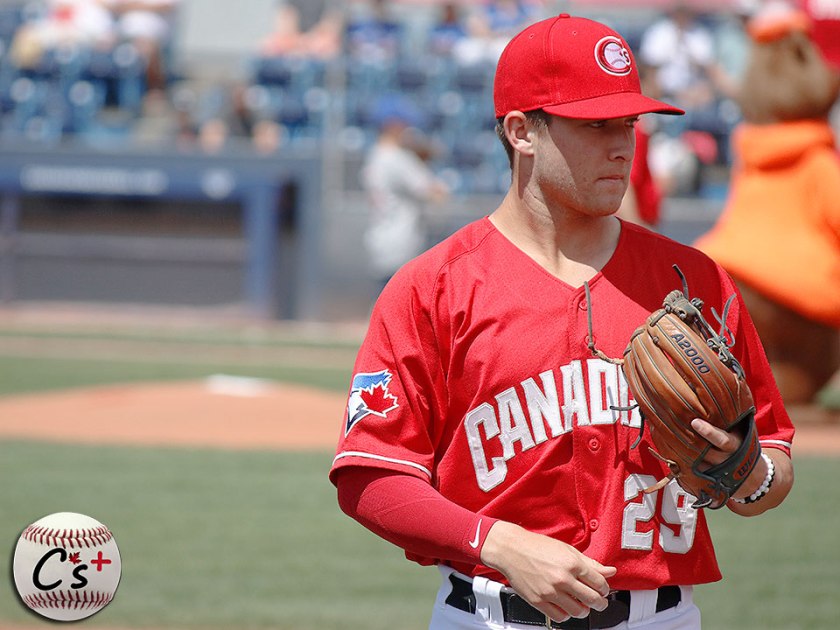 Logan Warmoth was on base twice with a hit and a hit by pitch Thursday.

The Vancouver Canadians were outclassed again as the Hillsboro Hops completed a five-game sweep with a 6-0 victory in the series finale at Nat Bailey Stadium Wednesday afternoon. It’s the third year in a row the C’s were swept in a five-game set at home and the first two streaks were part of nine-game losing skids overall. Vancouver has lost nine of its last 11 and their lead is down to one game in the North Division after Tri-City defeated Boise.

Donnie Sellers ran into trouble right away by walking Camden Duzenack and Bryan Araiza before chucking one to the backstop to move the runners another 90 feet. A sacrifice fly by Yan Sanchez brought in Duzenack and another wild pitch would score Araiza.

On the other end, Hops starter Tyler Keele struck out the side swinging as he sat down Reggie Pruitt, Kevin Vicuna and Logan Warmoth in their first at-bat.

Sellers began the second with a strikeout of Tra’mayne Holmes but a walk of Dan Swain combined with a Ryan Grotjohn single and error by Pruitt in center put runners on the corners. Duzenack and Sanchez would single home Swain and Grotjohn to expand Hillsboro’s lead to 4-0.

The C’s went down in order again in the second and began the third inning with a new battery. Matt Morgan replaced Riley Adams behind the plate after Adams flied out to start the second. Yonardo Herdenez took over for Sellers on the mound and was victimized by an error at short from Warmoth that allowed Dan Ellis to reach. Daulton Varsho would single to center before Holmes got aboard on a bunt single to third to put up the ‘No Vacancy’ sign on the bases. Swain lined out to Herdenez on the hill but a walk to Grotjohn and a sac fly Duzenack completed another two-run frame for the Hops.

Brock Lundquist was the first Vancouver baserunner when he walked to start the home half of the third but C’s could do nothing with that. Herdenez struck out Sanchez to start the fourth and retired seven in a row at one point before a Swain base hit but Herdenez got Grotjohn to tap back to the mound to end the fifth.

After going down in order in the fourth, the C’s got their first two runners aboard on a Kacy Clemens single and a David Jacob walk but they would end the inning there. 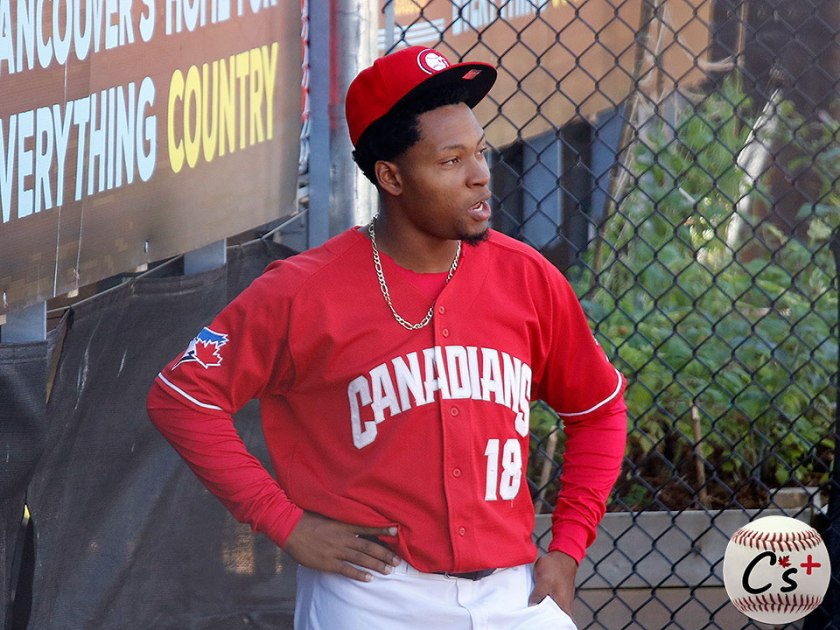 Orlando Pascual brought his earned run average down to 0.98 with two shutout innings of relief.

Orlando Pascual took over in the sixth and gave up a one-out hit to Araiza but Morgan threw him out trying to steal second. Pascual would end the frame with a strikeout of Sanchez. All the C’s could get in their half of the sixth was a two-out hit by Warmoth off Hops reliever Matt Peacock. Pascual faced the minimum again and struck out Ellis in the seventh as part of a 1-2-3 frame but the Vancouver bats were also silent in the bottom half.

Jake Fishman relieved Pascual and struck out a batter in a perfect eighth but all the C’s could get was a one-out single by Brandon Polizzi against Rafael Pujols.

Fishman gave up singles to Duzenack and Araiza to start the ninth but a 6-4-3 double play off the bat of Sanchez and a flyout to right by Smith helped him get out of the inning.

Pujols plunked Warmoth to start the ninth and hit Jacob with the ball too but Lundquist struck out to close the books on this horror show of a series. Vancouver had just four at-bats with runners in scoring position and left seven men on. Warmoth had a single an a plunk and Jacob walked and took one for the team. They were the only two players to get on base twice.

Sellers took the loss after allowing four runs on three hits and four walks with only one strikeout. Herdenez had two unearned runs allowed on three hits with a walk and a whiff. Pascual and Fishman had two shutout frames with Pascual striking out two on a one-hitter and Fishman striking out one with a two hits allowed.

It has been a busy couple of days on the transaction wire. 2013 C’s shortstop Dawel Lugo is now a member of the Detroit Tigers organization after being traded by Arizona as part of a package for outfielder J.D. Martinez. Lugo—rated the #2 prospect of the Diamondbacks by Baseball America—was hitting .282 with a .753 on-base percentage for the Double-A Jackson Generals where he had 21 doubles, four triples, seven home runs and 43 RBI.

Case joins the Bisons after winning all four of his decisions in New Hampshire to go along with a 1.29 ERA. Though he struck out just 14 batters, he only walked seven and had a WHIP of exactly one while holding the Eastern League to a .204 batting average. Case made his debut with the Herd Wednesday night but blew the save after giving up a solo home run over two innings. 2016 C’s reliever Griffin Glaude took the loss after an unearned run in the ninth against Columbus. 2011 infielder Jon Berti homered and 2014 outfielder Roemon Fields was 2-for-4.

2012 lefty Shane Dawson of Drayton Valley, Alberta had a quality start (6IP, 3ER) as New Hampshire doubled up Reading. Justin Shafer (2014) got the hold with two shutout innings of one-hit ball and Carlos Ramirez (2012) had a one-hit, one-strikeout ninth for his first save. He has not given up a run over 13 appearances this season. 2014 teammates Jonathan Davis and Ryan McBroom both homered with Davis getting two hits and a walk.

2017 C’s Yorman Rodriguez doubled twice, Chavez Young doubled once in a two-hit night and Jesus Severino knocked in two in a 1-for-3 night as Bluefield defeated Kingsport.

Nate Pearson—the 28th overall pick of the 2017 draft—is on his way to join the Canadians according to the Northwest League transactions column. The College of Central Florida righty made his pro debut with a scoreless inning Tuesday in the Gulf Coast League, giving up just one hit and striking out two. Pearson will join his fellow first rounder Logan Warmoth—who was taken just six picks ahead of him—on the C’s roster.

Vancouver opens a five-game series in Keizer, Oregon to take on the Salem-Keizer Volcanoes. The first four games of the series will wrap up the first half with the fifth game marking the start of the second. All games are set for 6:35 pm Pacific time except for Sunday’s contest at 5:05 pm. They can be heard at CanadiansBaseball.com.