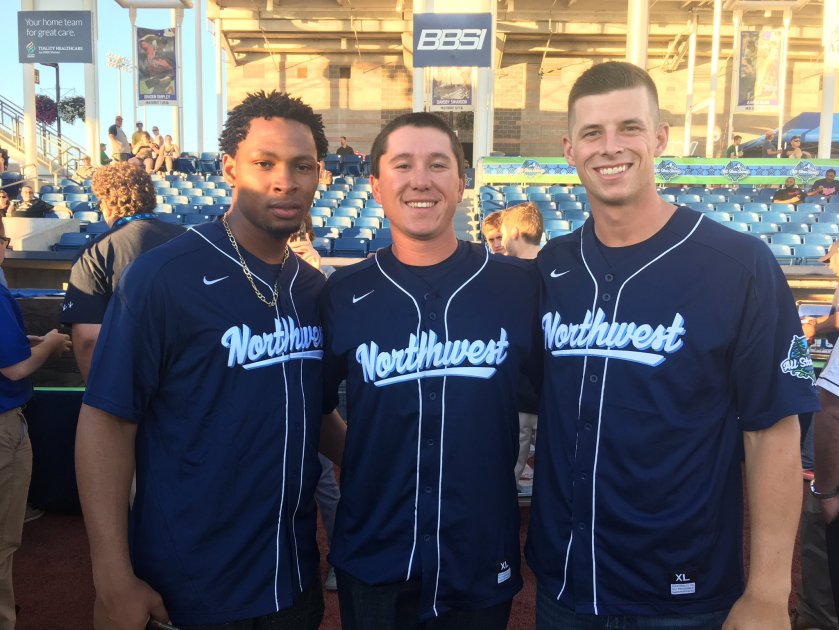 From left to right—Orlando Pascual, William Ouellette and Riley Adams at the Northwest League-Pioneer League All-Star Game in Hillsboro. (Image from @RobFaiNation)

The Vancouver Canadians All-Star trio helped the Northwest League record a come-from-behind 5-4 victory over the Pioneer League All-Stars in Hillsboro Tuesday night. William Ouellette struck out the only hitter he faced—whiffing Ogden Raptors catcher Luis Paz—to strand a runner in the top of the second inning. After catching Ouellette, Riley Adams had a single in his only at-bat in the bottom half of the frame as he got the best of Helena Brewers righthander Nelson Hernandez. Orlando Pascual pitched a scoreless seventh, giving up a double and a walk but striking out Leonardo Rivas of the Orem Owlz and Keyshawn Lynch of the Missoula Osprey.

Here’s a look around the Blue Jays system through the Twitter-verse involving former Vancouver Canadians with stops in Dunedin, Lansing and Buffalo plus a dash of independent league news and a recently-inducted Hall of Famer who drops by Vancouver from time to time as a member of the Blue Jays organization.

Jays win 19 games in the month of July thanks to some big performances from our July All-Stars! pic.twitter.com/5ZZ1I1nzhA

Tomorrow’s @EverettHerald sports cover featuring Monroe’s Ian Parmley who made his MLB debut with the @BlueJays in June @BuffaloBisons pic.twitter.com/mcdDddOdXV

Going 5-0 with a 1.04 ERA in 5 starts, @CapitalesQuebec RHP Arik Sikula is Pitcher of the Month. https://t.co/pZMGDhKush pic.twitter.com/h5nnNqnA1W

Congratulations to Expos legend @TimRaines30 on earning his rightful place in Cooperstown! 👏🏼👏🏼 pic.twitter.com/Djfooa5ktz