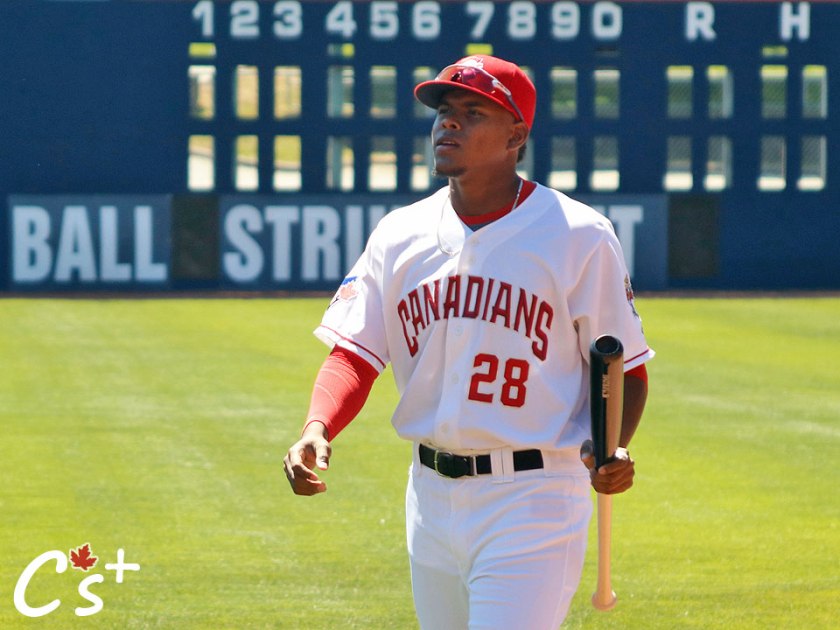 The Vancouver Canadians found the win column for the first time in 2018 after a 6-4 victory over the Eugene Emeralds at P.K. Park Sunday afternoon. The win puts the 1-2 C’s in a three-way tie for first place in the North Division with Spokane and Tri-City.

Vancouver grabbed its first lead of the season in the first inning. Nick Podkul started a two-out rally with an opposite-field base hit to right off Emeralds lefthander Brailyn Marquez. Chris Bec followed with a base rap up the middle before Reilly Johnson went the opposite way to right with a ground-rule double to plate Podkul. Jesus Navarro could not add to the lead as he popped up to second to strand two runners in scoring position.

The lead did not last. Eugene battled lefthander Jordan Barrett to a 29-pitch first inning but it resulted in just one run. Barrett struck out Fernando Kelli and Nelson Vazquez but a one-out walk to Luis Diaz would come back to bite Barrett. Diaz stole second base on a controversial call when Barrett appeared to pick him off at first base but the base umpire disagreed. Gustavo Polanco would then line a 2-2 pitch to left to score Diaz with the tying run.

Gustavo Polanco gets the Emeralds on the board with a two out double! pic.twitter.com/kYMhOew1vH

The C’s had chance to break the tie in the fourth with a two-out rally. Navarro walked and stole second base before McGregory Contreras was hit by a pitch (he would get his revenge later!) and Bryan Lizardo was walked to load the bases. Casey Ryan relieved Marquez and stranded all three runners by getting Brandon Polizzi to pop up to short.

Vancouver would finally break through in the fifth when Tanner Kirwer dobuled down the left field line before Podkul tripled him home. A Ryan wild pitch would score Podkul to give the C’s a 3-1 lead.

Barrett was trying to get through the fifth to qualify for the win but was lifted with two outs in the fifth. Singles by Balego and Rafael Mejia could have put Barrett in big trouble but Polizzi started a 9-4-5 play to nail Balego at third. Barrett struck out Vazquez with Mejia on second but manager Dallas McPherson elected to bring in North Vancouver, BC native Will McAffer out of the bullpen. McAffer walked Kelli but struck out Diaz swinging to keep the Emeralds at bay.

Contreras would increase the C’s lead, dropping down to one knee Ernie Whitt-style to pull a 3-2 full count pitch off Ryan over the wall in left field and into the Vancouver bullpen for a leadoff home run in the sixth. After McAffer overcame a two-out walk to Jonathan Sierra in the sixth, Vancouver tacked on another run in the seventh when Bec singled, stole second base and went to third on a wild pitch during a Johnson walk. Bec would score when Navarro dropped down a bunt single down the third base line to catch the Emeralds defence by surprise.

2017 Northwest League All-Star Orlando Pascual was on the mound for the C’s to begin the seventh but Eugene got to him when Vazquez doubled home a Balego double.

A Polanco RBI triple and a Sierra RBI groundout off Pascual brought Eugene to within one in the eighth.

Gustavo Polanco gets another extra base hit and another RBI in the bottom of the 8th! pic.twitter.com/pUSBctSgVH

Connor Law came into the game and sandwiched a hit by pitch to Balego with strikeouts of Morel and Mejia to end the frame. The C’s would get a huge insurance when Contreras went deep again to left-center field with two outs in the ninth. Reaching 93-95 miles per hour on the radar gun, Law would strike out the first two men he faced before Diaz extended the inning with an infield single to short. Law would get Velazquez to fly out to center to end the ball game. 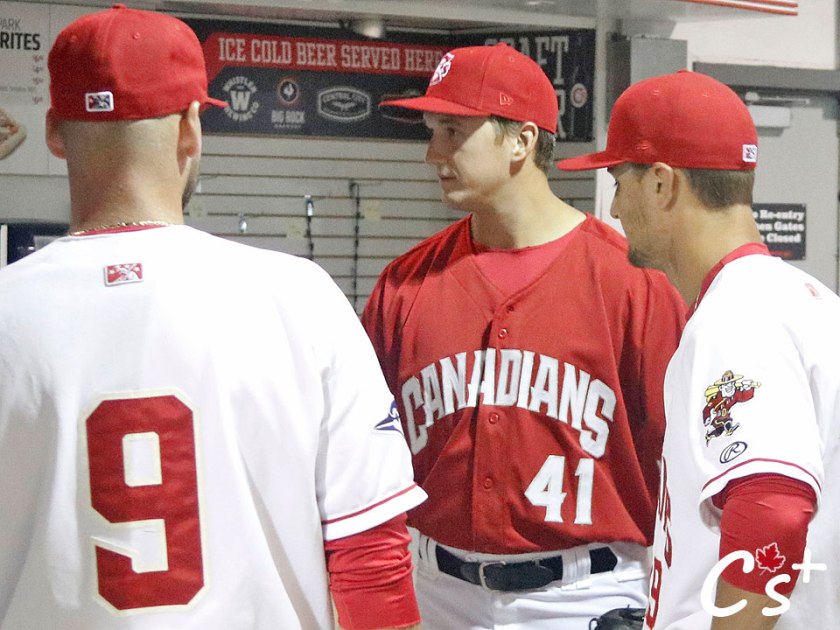 Connor Law had four strikeouts in 1-2/3 innings for the save Sunday.

Barrett was able to settle down thanks to some help from his defence. Johnson erased a Cam Balego walk by throwing him out trying to steal second to end the second. Then after a three-up, three-down inning in the third, Vinny Capra started a 6-3 double play on a Polanco line drive to erase Velazquez at third after reaching on an error by Jesus Navarro. Barrett got more help after two base hits started the fifth as Polizzi started a 9-4-5 play to cut down Balego at third after he tried to advance on a Rafael Mejia single.

Rain became an issue in the latter stages of the game which lasted three hours and 37 minutes.

Podkul was a home run short of the cycle and one of his fly balls was hit to the warning track in left field in the seventh. That was among seven extra-base hits and 13 in total for the C’s.

McAffer earned his pro victory with 1-1/3 shutout innings of relief by overcoming two walks with two strikeouts while Law had four strikeouts to record a five-out save.

Sunday’s victory marked the first of McPherson’s managerial career. No word yet on whether he thought it was an easy win.

Josh Winckowski is listed as the probable pitcher for Monday night’s game in Eugene. Game time is 7:05 pm at P.K. Park on CanadiansBaseball.com and MiLB.TV.

The Eugene Emeralds suffered their first loss of the season Sunday night against the Vancouver Canadians. Hear how manager Steve Lerud says his team responded to adversity. https://t.co/4dHdOkCrCr

The @FloridaStateLg’s All Star weekend concluded with a 5-0 shutout win in favor of the North Division as @TampaTarpons’ own Diego Castillo received MVP honors. Here’s a selection of last night’s images. (2/2) pic.twitter.com/CxdyjQdIVF

Happy Father’s Day to the man that supports me… https://t.co/RoEvlGmDGv

Thanks for letting us play on your field. @vancanadians We set up in what we now call Pruitt field. https://t.co/SGZVkgo4aT

Happy Father’s Day ! Thanks for everything Dad. pic.twitter.com/3CDdhejurV

Father’s Day has a special meaning this year for the #BlueJays Double-A affiliate in New Hampshire, where Vladimir Guerrero Jr., Bo Bichette and Cavan Biggio are all striving to perpetuate the family tradition. https://t.co/O8435pAUes

Congratulations to Lloyd “Shaker” Moseby on his induction into the @CDNBaseballHOF yesterday!

Happy Father’s Day to all the dads and father figures especially mine big Dave. Also @SargeJET @JeredGoodwin3 love you three and miss you guys a lot

Happy Father’s Day to all the great Dads out there. Life may be tough sometimes but you get through it with guys like @cdaily6 … much more than a friend: Cole is a brother. Cherish the moment sons/fathers. We are all extremely lucky https://t.co/NS8gxXODIX

Cavan now has 52 RBI on the year, second-most in the league pic.twitter.com/3ijt3XuT4Z