The Vancouver Canadians are now just one game back of first place in the Northwest League’s North Division. The C’s defeated the Spokane Indians 7-3 in the opener of a three-game series at Nat Bailey Stadium Saturday. The Everett AquaSox lost to Tri-City 3-0 in Pasco, Washington to fall to 12-11, one game ahead of the Canadians and Dust Devils.

Vancouver responded first on the scoreboard when Jesus Severino hammered a ball into the left field porch off Spokane righthander Ryan Dease with two out in the second.

The C’s would manufacture a run in the third when Otto Lopez got on base with a bunt single to third but a throwing error by Juan Ventura allowed Lopez to reach third. A sacrifice fly to left by the birthday boy Vinny Capra, who turned 22, brought in Lopez to make it 2-0 Vancouver.

The Canadians would break the game open in the fourth when Bryan Lizardo led off with a walk and Jake Brodt lined a single up the middle. Severino would double them home with a line drive to center. McGregory Contreras would give Spokane center fielder Troy Dixon more exercise with a triple up the middle to score Severino. Contreras would come home on a sacrifice bunt by Brandon Polizzi. Lopez lined a single to left, stole second, went to third on an errant pickoff throw and scored on a wild pitch by Spokane reliever Reggie Meyer to give Vancouver a five-run frame. 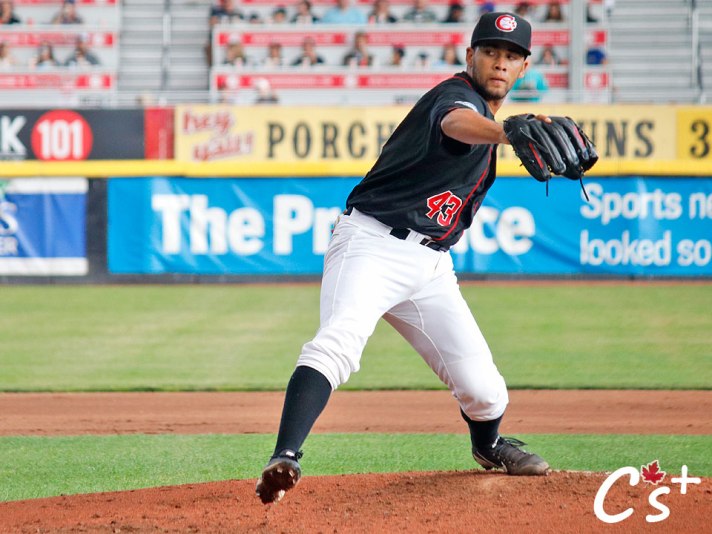 Canadians lefty Elio Silva retired the first 11 hitters he faced before a two-out single by Tanner Gardner in the fourth. Silva got out of that inning but surrendered an infield single to Jonah McReynolds to begin the fifth. McReynolds made it into scoring position on an Austin O’Banion grounder to second before scoring on a Francisco Ventura single to left. A two-out double to center by Juan Ventura would score Francisco Ventura to pull Spokane to within five runs.

The Indians got their last run in the seventh when Francisco Ventura doubled off Marcus Reyes, went to second on a Isaias Quiroz grounder to second and scored on a throwing error by Capra at short on a groundball by Juan Ventura.

After Reyes worked the sixth and seventh innings, Will McAffer finished off the eighth and ninth to seal the victory for the C’s.

Silva was changing speeds effectively as he ranged from 76-92 miles per hour with offerings also in the low-to-mid-80s. He recorded strikeouts at 86, 88 and 90.

Silva managed to battle back from 3-0 counts to retire Curtis Terry and O’Banion in the second inning. The C’s lefty struck out Terry—the Northwest League’s leading slugger—as he finished the night with a golden sombrero. He could be seen muttering to himself after his second inning strikeout. O’Banion was retired on a foul pop-up to Brodt at first. Catcher Christopher Bec did a good job communicating with Brodt by yelling at him, ‘You got room! You got room!’ before Brodt made the catch.

Though Hunter Steinmetz also had a four-strikeout game, he made a fine running catch on a Juan Ventura line drive to center to end the third inning.

Contreras was hit by a pitch twice in one at-bat but was only credited for one. He was plunked by Meyer in the arm in the fifth inning but umpire Nolan Earley believed Contreras did not hold up on his swing. C’s manager Dallas McPherson argued the point vociferously. Contreras was later hit in the upper back by Meyer to reach base.

Reyes had one get away from him in the seventh inning as Dixon was hit on the top of the batting helmet in the seventh. Dixon did stay in the game after being down on the ground for several minutes. Reyes could be seen asking Dixon how he was when Dixon passed the mound after running back from third base to first base after a foul ball. 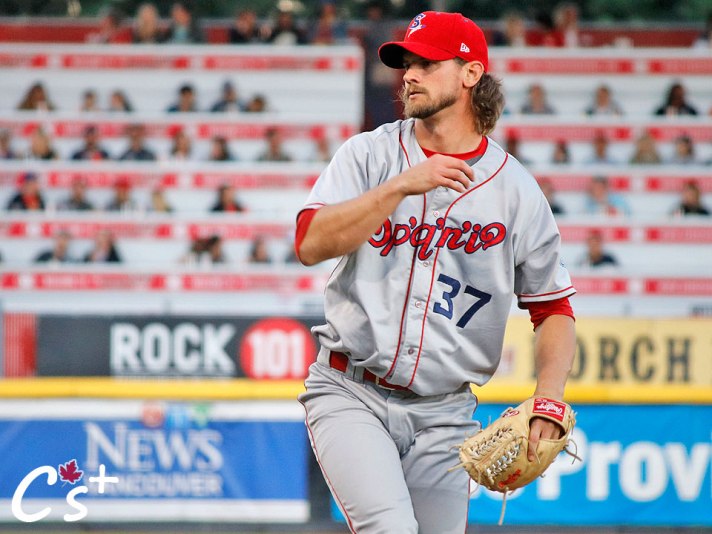 2017 C’s pitcher Bobby Eveld is now with the Texas Rangers organization. He made his Ranger debut for Spokane last night with a scoreless sixth inning, offsetting a walk with two strikeouts. The 26 year-old was 2-0 with the C’s last year before being sent down to the Gulf Coast League to end the year.

Spokane manager Kenny Holmberg—son of Bluefield Blue Jays manager Dennis Holmberg—argued a call when Polizzi tried to lay down a bunt in the eighth inning and the ball appeared to hit him out of the batter’s box. Polizzi’s at-bat was allowed to continue and he would ground out to second.

Vancouver had 11 hits and three walks to overcome 11 strikeouts and a 2-for-9 effort with runners in scoring position while leaving eight men on base. Lopez was the on-base leader with three hits and a walk while Severino also had three hits. Capra celebrated his birthday with two hits, a walk and a stolen base. Contreras also had a two-hit night.

C’s pitchers struck out 10 and walked two overall. Silva and McAffer struck out four apiece with Reyes whiffing two. McAffer issued just one walk over two frames while Reyes surrendered an unearned run on two hits and a walk.

6-foot-9 righthander Fitz Stadler has been promoted to Vancouver from Bluefield. Stadler posted a record of 2-0 with a 0.79 earned run average in the Appalachian League and struck out 17 while walking just three over 11-1/3 innings. Stadler was taken in the 18th round by the Toronto Blue Jays in this year’s draft.

The C’s and Indians continue this three-game series at Nat Bailey Stadium Sunday afternoon. Lefthander Randy Pondler (0-3, 4.24) is scheduled to throw the first pitch at 1:05 pm. Righthander Scott Engler (2-0, 2.57) will be on the mound for Spokane. The game can be heard on CanadiansBaseball.com and TSN 1040. Pregame is at 12:00 pm.

Play in the Florida State League they said. It’ll rain every day they said. Well, they were right. #RainRainGoAway

It was the toughest of tough losses tonight (8-7 Reading), but we sure had some highlights — including our second pair of back-to-back homers in the last three days! pic.twitter.com/ZLgXEYIDn4

Reading scores four in the ninth to go up 8-6.

In the bottom half, we get two men on base, Cavan Biggio rips one to right, and then….wow: pic.twitter.com/2ai1Sw53Hv

If you’re thinking: “Why do they even pitch to Biggio?”

They don’t, really. He just drew his league-leading 61st walk of the season. https://t.co/mUK2x1iacr

Another Biggio bomb! His league-leading 19th of the year has us on the board. pic.twitter.com/F36bLKWSNd

Familiar faces are on the mound for @spokaneindians tonight #AtTheNat

Thanks my brother love you too kid keep grinding✊🏾❤️ https://t.co/Gk0IXCxcp0

What a beauty night for a baseball game #AtTheNat pic.twitter.com/Ld6eV92sNB