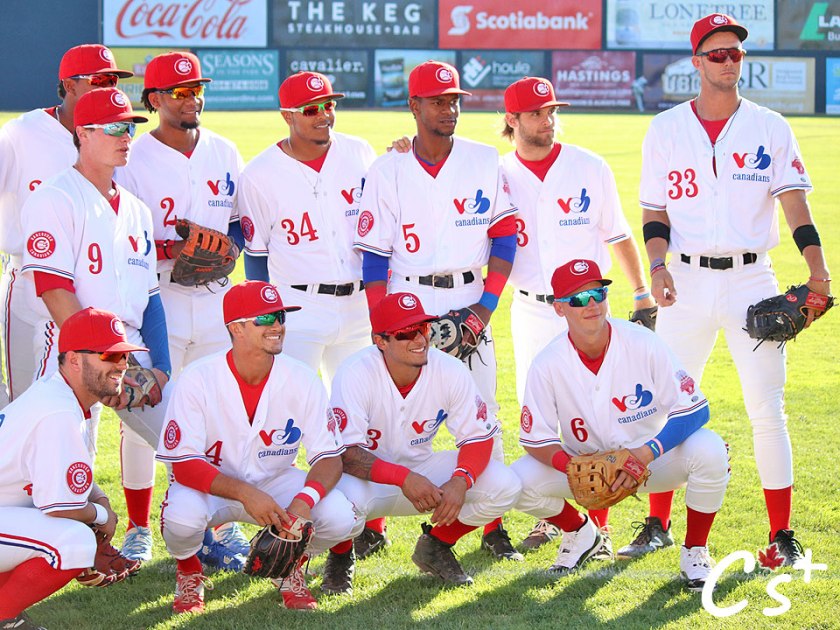 Sterling Guzman (#2) greets Christopher Bec after they scored on a two-run single by Vinny Capra in the seventh inning Monday.

The Vancouver Canadians had to settle for a .500 record for the first half of the Northwest League season after a 6-3 setback to the Hillsboro Hops Monday night at Nat Bailey Stadium. The loss dropped the C’s to 19-19 as they finished one game back of the first-half North Division champion Everett AquaSox.

The Hops jumped on Josh Winckowski from the get-go as Tra Holmes doubled to left, stole third and scored on a one-out single by Andy Yerzy up the middle that Winckowski could not come up with at the mound. A Joey Rose double to left and and a Francis Martinez base hit to right brought in Yerzy for the Hops’ second run. Winckowski did help himself out when he handled a smash off the bat of Jake McCarthy who threw to home where catcher Brett Wright chased down Rose up the third base line for the second out. Winckowski then walked Ryan January to load the bases but got Alex King to pop up to Wright in foul territory to end the frame.

Winckowski looked to be settling down in the second when he got the first two batters to start the second inning but a Jorge Perez triple to center was cashed in by a Yerzy single to center to increase Hillsboro’s lead to three.

Hillsboro continued to pour it on in the third when McCarthy reached base on a one-out error by Jesus Severino in the third. McCarthy made it to third on a base hit to right by January before scoring on a King bunt single to second. January and King pulled off a double steal when Keshawn Lynch struck out. January would score when Winckowski was unable to handle a hot shot up the middle by Holmes who was credited with a single. The inning ended when Wright threw out Holmes trying to steal second base.

The Hops would score their sixth run in the sixth against Denis Diaz when Perez reached on an error at second by Nick Podkul. A Yerzy single pushed Perez to third before he tagged up and scored on a Rose sacrifice fly.

After being held down by Matt Mercer and Ryan Miller, Vancouver responded with its first run in the bottom of the sixth against Andy Toelken when Hunter Steinmetz tripled to center field off and scored on a Podkul sacrifice fly to left.

Vinny Capra had two hits and two runs batted in for Vancouver Monday.

The Canadians crept closer in the second when walks by Sterling Guzman, Christopher Bec and Brandon Polizzi loaded the bases against Trevor McKenna. Vinny Capra would single up the middle against Josh Green to score Guzman and Bec. Polizzi would get picked off at third to end the threat.

Will McAffer pitched 1-1/3 scoreless innings and Connor Law had a scoreless ninth for Vancouver but Green got the final seven outs for the save to help the Hops salvage the series finale. 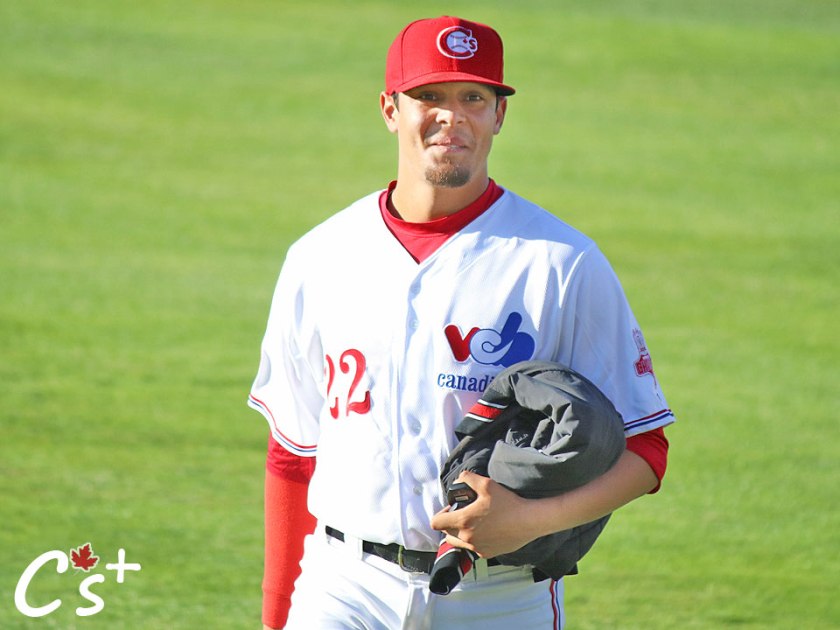 Winckowski was 92-94 miles per hour with his fastball and did reach 97 once.

Connor Law kept the Hops off the board with a shutout ninth inning Monday.

Capra got Vancouver’s first hit with an infield single to short but was shaken up after preventing a double play on a groundout to short by Steinmetz. He would stay in the game.

Diaz had January fooled on a pitch as January flung his bat all the way to first base after striking out on a pitch at 85 MPH to end the sixth.

Guzman made a nice stretch to stay on the bag at first after an off-target throw by Severino at third on a grounder by King to start the ninth.

After Capra’s infield single, the only other baserunners the C’s had were a Podkul hit by pitch in the fourth inning and a Severino infield single to second in the fifth. Severino made it to second on a Toelken wild pitch but he was stranded.

Vancouver manager Dallas McPherson was tossed by the umpire after McCarthy stole second base in the sixth inning. McPherson celebrated his 38th birthday Monday.

The C’s had a chance to get closer in the eighth when Steinmetz singled to short and Griffin Conine walked with one out but Guzman hit into an inning-ending 4-3 double play.

The Canadians tried again in the ninth when Bec doubled with one out and Polizzi walked with two outs to bring Capra to the plate as the potential tying run but Capra popped out to short to end the game.

Capra and Steinmetz had two hits apiece at the top of the order while Polizzi drew two walks in the number nine spot. Vancouver had six hits, five walks and a hit by pitch against five strikeouts. They had just one hit in eight at-bats with runners in scoring position with seven men left on base. Hillsboro was 7-for-19 with runners at second and/or third with 14 men stranded. Yerzy had a perfect day at the plate with three hits, a walk and a hit by pitch along with two runs batted in.

Winckowksi gave up 10 hits, a walk and a hit by pitch over four innings which led to five runs, three of them earned. Diaz was nicked for an unearned run in 2-2/3 innings on three hits. McAffer worked around a hit and two walks over 1-1/3 innings while Law navigated his away around a walk in the ninth.

The Canadians wore special Montreal Expos-style uniforms in the second of its three throwback jerseys this season. Rob Fai recreated the broadcast on TSN 1040 by substituting the Canadians roster with that of the Montreal Expos 1994 team.

Vancouver begins the second half of the season on the road against the first-half North Division champion Everett AquaSox at 7:05 pm Tuesday night. Southpaw Elio Silva (2-1, 3.26) gets the start for the Canadians. Orlando Raza (1-2, 3.31) will be on the hill for the Frogs. The game from Everett Memorial Stadium can be heard on CanadiansBaseball.com and on TSN 1040 with the pre-game show at 6:00 pm.

On July 24th, it will be 25 years since one of the most famous @MLB incidents occurred. #pinetar @Royals Last year, @USATODAY looked at 5 things I never knew about the incident at @Yankees Stadium. https://t.co/Ql2zEbwBbV

Anything you need let me know!! Message me!! God bless 🙏🏽 https://t.co/jn7tiGqF3j

All these massacres in the world is unreal! It makes me sick to hear about innocent people getting lives taken away. Be safe everyone and sorry for the losses to those families. #TorontoStrong

#PlayBall is coming to Vancouver!

Feeling a little parched in this hot weather? The @WawanesaCanada water bottle will keep your hydrated all summer long! #AtTheNat

Join on July 31st and the first 2,000 fans will recieve this water bottle.

Connor Law takes the mound for the Canadians in the top of the 9th. #AtTheNat