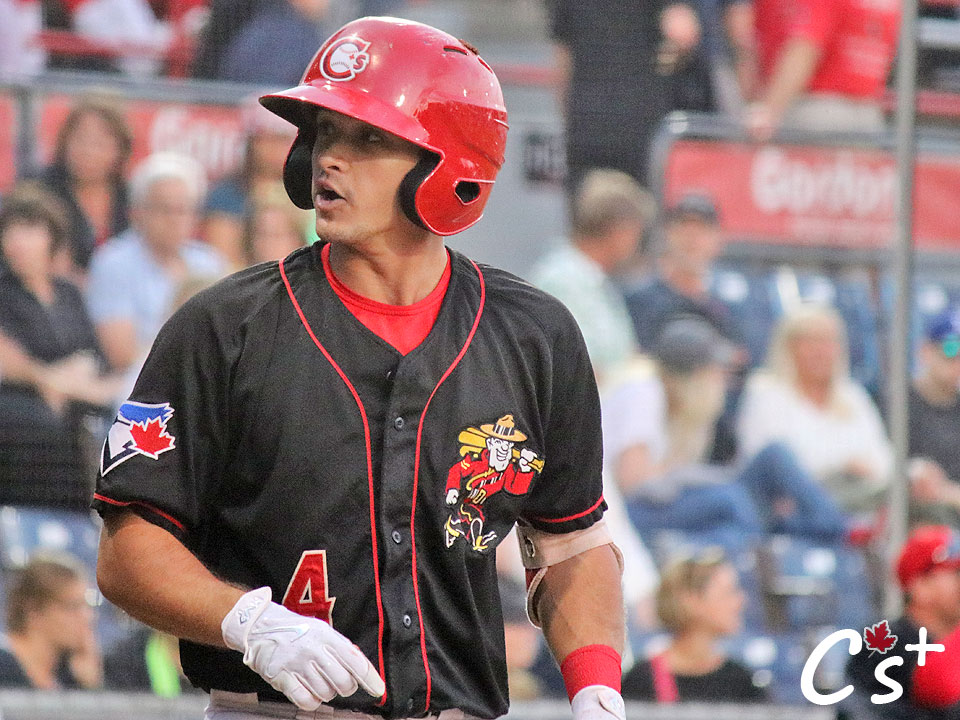 The Vancouver Canadians wrapped up their 2018 season against the Spokane Indians at Avista Stadium on a winning note with a 7-4 triumph Monday night. The victory was the 40th of the season for the C’s as they finish with a 40-36 record.

Hunter Steinmetz started the Vancouver rally in the first with a double to left off Werner Leal and scored when Spokane shortstop Jonah McReynolds booted a Jake Brodt ground ball.

The C’s returned the favour in the third inning when Sterling Guzman botched a ground ball at third to allow Tyler Depreta-Johnson to reach base. A Troy Dixon ground ball to first scored the hypenated one to tie the game for Spokane before a Hasuan Viera singled off C’s starter Sean Wymer cashed in an Austin O’Banion double to give the Indians the lead.

Jesus Severino gave Vancouver the lead again in the fourth with a two-run double off Jesus Linarez to plate a Yorman Rodriguez infield single to short and a Guzman walk.

The C’s scored twice more in the fifth when McGregory Contreras doubled to center off Xavier Moore to score a Steinmetz single and Rodriguez brought in Contreras with a base hit up the middle.

The final two Vancouver runs of the season came in the eighth when a Brett Wright fielder’s choice scored a Guzman single and Brandon Polizzi singled to left to score Wright off Kyle Keith.

Spokane’s last gasp came in the ninth when Kevin Mendoza reached on a Guzman error at third with two away before Isaias Quiroz took Juan Nunez deep to left for a two-run home run. Nunez struck out Cristian Inoa swinging for the final out of the season.

Joey Murray picked up his first professional win with two scoreless frames after taking over for Wymer. Joey Pulido, Denis Diaz, Polizzi (more on him in a moment) and Connor Law provided shutout relief until the ninth.

One day after 2016 Vancouver Canadian Nash Knight played all nine positions for Dunedin in its regular season finale, Polizzi did the same for the C’s Monday night. He played all nine positions starting at second base before making his way to shortstop, third base, left field, center field, right field, first base, pitcher and then catcher. Polizzi needed one pitch to retire Scott Kapers on a pop out to short. According to Rob Fai‘s account on CanadiansBaseball.com, Polizzi shattered the bat of Kapers with a 73 mile-per-hour offering.

@RobFaiNation If the @vancanadians game tonight goes to a 10th inning consider inviting Brandon Polizzi into the broadcast booth to do the play by play. That would top Will Farrell!.

Now in the bottom of the 8th and Brandon Polizzi is in at catcher. That’s nine positions in eight innings! Nice work @vancanadians @thisdudebp #GoSpo pic.twitter.com/iUkOiKeh4U

Brandon Polizzi (@thisdudebp) walking off after playing his ninth position of the game.

Indians trail @vancanadians 7-2 as we go to the 9th inning #GoSpo pic.twitter.com/wUCBfu1DMD

Mr. August is now making a statement in September. What a way to end off a great season @thisdudebp! 💪👏⚾️ https://t.co/SGcZr0R7lV

1st full year of pro ball in the books. Had some pretty awesome teammates to make it a memorable year wouldn’t have any other group of guys to have a #longshortseason with. #canadians https://t.co/nqUzLgYlx5

The C’s lost their DH spot as Law and Nunez are listed on the batter’s portion of the boxscore. Otto Lopez pinch-hit for Law and drew a walk in his final plate appearance of the season. Steinmetz played center and left field, Contreras toggled between right and left, Brodt did the two-step at first and second and Reilly Johnson played left and second. 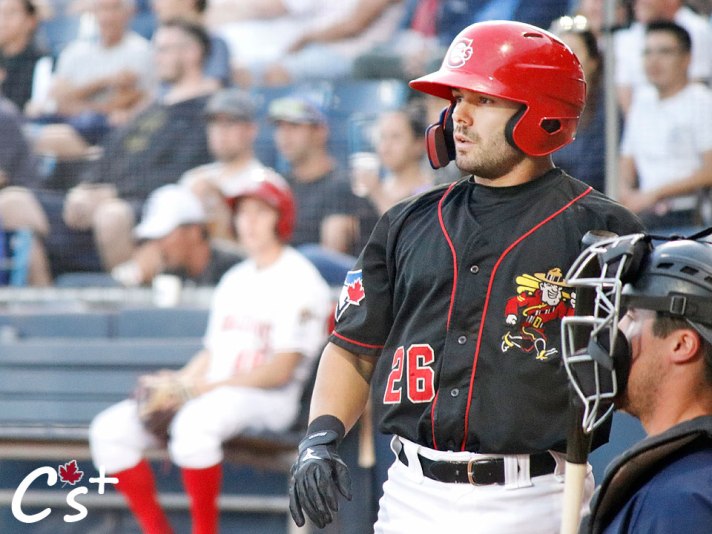 Hunter Steinmetz was one of two C’s to enjoy a three-hit night in Spokane Monday.

Steinmetz and Severino led the C’s with three hits apiece and Rodriguez and Guzman had two. The C’s had three hits in 15 tries with runners in scoring position and struck out 13 times. That was offset by 13 hits, two walks and a hit by pitch when Contreras took one for the team.

Though the C’s finished with the best overall record in the North at 40-36, they did not capitalize on having 17 of its final 23 games at home. Their inability to take care of business against their North Division rivals ultimately cost them by losing two of three to Tri-City and Everett at home and on the road. That’s why most of the players are heading home with a select few heading to Lansing to help their playoff drive.

Vancouver was not the only short-season team in the Blue Jays system that suffered a heartbreaking end to their year. The Bluefield Blue Jays lost to the Princeton Rays in three games in their division final. Had Vancouver made the playoffs, there may have been some reinforcements from Bluefield  in the form of 2018 first-round pick Jordan Groshans or Alejandro Kirk among others but they may skip past Vancouver and join Lansing in 2019.

Rowdy Tellez has been promoted to the Toronto Blue Jays.

Congratulations to 2014 C’s designated hitter Rowdy Tellez as he is going to the show. Tellez was part of the 2014 C’s playoff roster and nearly hit a home run in Hillsboro but the C’s fell short of a four-peat in the Northwest League Final. After his mother passing away recently and struggling for the better part of two seasons in Buffalo, Tellez found his game and is now getting rewarded for his perserverance. He batted over .300 in July and August and finished with a slash line of .270/.340/.425 with 22 doubles, 13 home runs and seven stolen bases.

That will do it for C’s Recap in 2018 and you can find all 76 games summarized on CsPlusBaseball.ca. There may not be as many in 2019 and beyond with perhaps a focus on home games instead or any road games I hope to attend. Thanks for reading and keep checking back. I have a number of interviews with quite a few members of the 2018 Vancouver Canadians that have to be transcribed and I hope to have those online during the course of the off-season.

Rowdy Tellez will be among #BlueJays‘ September call ups.

Here, at last, are the names you’ve been wondering about.

The plan is for Nate Pearson to start, and Adam Kloffenstein to relieve him. https://t.co/GaVMjp8xkr

I really pull for people like this. Don’t want a hand out, just an opportunity. Respect. https://t.co/vK4i0jKpd8

Marcus Stroman: “Being out there every fifth day is a priority and something that I always want to do. I hate being on the DL. I hate watching. I hate not being out there. It frustrates me and kills me inside. I’m going to do everything in my power to be out there” #BlueJays

Jose Fernandez threw a scoreless inning of relief on Saturday in his Major League debut for the Blue Jays! Congrats, Jose!

Fernandez becomes the 227th former DJay to play in the Majors! pic.twitter.com/C58PSxzYmT

Big congrats to @JoeyMurray30 on earning his first professional win in his team’s final game yesterday! Probably deserving of more than just one win though, since he didn’t give up a run in six starts! Final line of: 25.2-19-5-5-10-39, 1.75 ERA. #ThatllWork pic.twitter.com/PTIxMgSmsE

.@SamadTaylor7 leads off the 6th inning with a game-tying HR to the blue bleachers in left!

CANADIANS: Nate Pearson remains one of the brightest lights I have ever seen pitch. Check out his story here. TSN Original: 100 https://t.co/afWmjBrU2o

Blue Jays pitching prospect Nate Pearson has a cannon for an arm. At 6’6” and 245 pounds, the 2017 first round pick has all the tools to be a major league ace … but he wants to be even more than that.

Sean Reid-Foley has the stuff to be a big part of the #BlueJays rotation going forward. pic.twitter.com/784Eooaam8