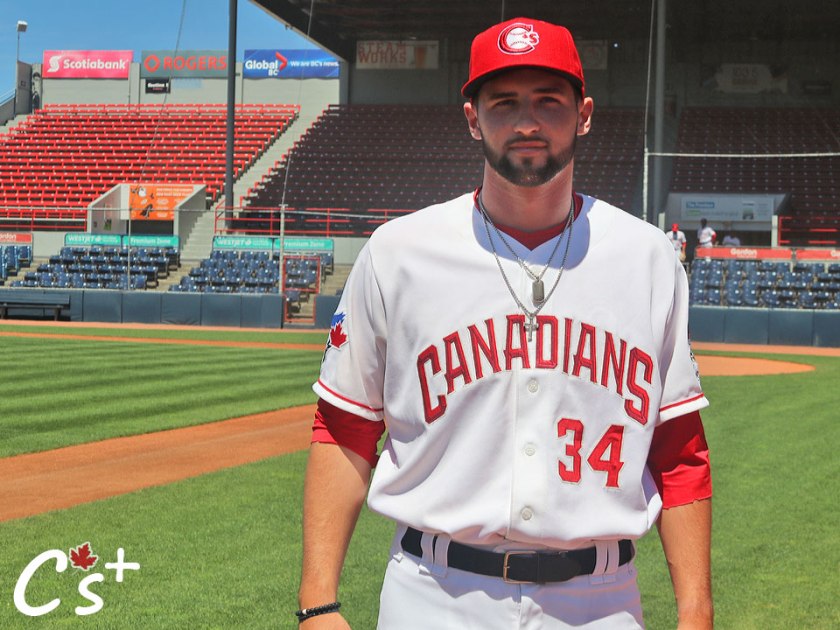 The highest drafted pitcher for the Toronto Blue Jays in 2018 is getting ready to make his Vancouver Canadians debut Friday. Adam Kloffenstein—the Jays third round pick from last year—will throw the first pitch of the Northwest League season during the C’s home opener against the Spokane Indians at Nat Bailey Stadium.

The 6-foot-5 Kloffenstein (pronounced KLAW-fen-steen, “like there’s two e’s at the end” according to the man himself) spoke with the Vancouver media during Media Day Tuesday and says he’s heard nothing but good things about playing at The Nat.

“I’ve been hearing about this level since I got drafted. Since literally draft day, I’ve been hearing about this level and was expecting to go here sometime early in my career. I’ve heard it’s amazing, the most consistent things I’ve heard about this place. I haven’t heard anything negative. I’ve been here for not even 24 hours and it’s been amazing so far. Like watching the Raptors game last night, just the atmosphere, the fans – everybody’s so nice. I just can’t be more excited for this year and not to mention it’s my first season but to have it be here is very cool and I’m looking forward to it.

This is the most excited, by far, that I’ve been since that day that I got drafted. It’s been kind of slow to start as I knew it was going to be. I just found out officially that I was coming here about a week ago. I mean, I’ve been optimistic about it but it’s been a goal of mine for a while. I want to come here and I want the fans to love me. I’m hearing that I’m going to love the fans. I’ve heard lots of great things and I’m shooting to be an All-Star. There will be nothing better than to help this team and hopefully win a championship.”

Getting to pitch on Opening Day for the C’s was what Kloffenstein was hoping for.

“It’s awesome. It’s a great honour. Obviously being a young guy and being able to come out here and kind of set the tone for the season for a sold-out crowd, I’ve had butterflies about it for a week now. I’m really looking forward to it. It was kind of a goal I set going into spring training was to be here right now and to get that start, I made a deal with my pitching coach back home and we both held up our own end of the bargain so here I am starting Opening Day and I couldn’t be more excited about it.”

When he takes to the mound for Opening Day, Kloffenstein says he will not change his approach.

“I think the same thing I’ve done my whole career. I mean, it’s a simple game to me. It’s obviously who wants to execute the most and whoever works the hardest is probably going to come out on top but to me, it’s like if you simplify it the most, you can throw strikes, go after hitters. You’re going to get hit some, you’re going to walk guys you know but looking for perfection and going out there and just doing the same thing that’s gotten me to where I am.

It’s just throwing strikes and being confident in myself and going out there with a  little bit of a chip on my shoulder every time and trying to prove something is really what I’m looking to do here.”

Kloffenstein has just two professional innings under his belt so far. The Blue Jays organization wanted to take care of his right arm so he only pitched in the Gulf Coast League Blue Jays where he made a pair of one-inning scoreless starts last August. His last outing came on his 18th birthday August 25. He allowed a hit and two walks but struck out four over the two outings.

The prospect of getting to pitch in front of more than 6,000 fans on Opening Day will be a nice difference from pitching in extended spring training for Kloffenstein.

“I threw in spring training some and then I knew I was probably going to go to extended. I started in extended for one inning and then every six or seven days, I threw two (innings), then threw three, then threw four. It’s a lot different. There’s nobody really there. There’s more people in this (press) circle that are at the games. A lot of people say it’s hard to get amped up or it’s hard to be competitive in that nature. It’s just really not for me.

I mean, it’s all the same. Obviously it’ll be a whole lot easier here come Friday to get amped up but when you’re going out and like I said, I’ve tried to look at it like I’m trying to prove something every time I got out. I haven’t gotten anywhere yet, I haven’t accomplished anything so that’s kind of my mindset going into games like that. It’s easier for me to get amped up and get into it enough. I’ve been doing well and I’m looking to keep that going starting on Friday.”

Nat Bailey Stadium has earned the reputation of a pitcher’s park over the years but that will not change Kloffenstein’s approach on the hill.

“I’ve heard that the ball doesn’t fly as much here. If someone said, ‘Hey, the ball flies really well here,’ I’m not going to pitch that much different. I mean, guys are going to run into balls, it’s a long season. It’s a short-season (league) but it’s still going to be long for me coming from 30 games in a high school year so this is going to be a long road for me and I’m looking forward to not getting too high, not getting too low. You give up a homer, you give up a grand slam, you blow a lead, stuff like that, it’s going to happen. I think it’s more about the way you come back from those things than it is about anything else.

I don’t know what to expect. I have heard a lot of things. I’ve kind of been going into this whole deal over the last year. I have notes on what to expect everywhere I’ve gone. I’ve heard tons of great things. I’ve heard the ball doesn’t fly. I’ve heard all kinds of things about the fans being, sold out (attendance), and all that kind of thing. We’ll see about the ‘ball doesn’t fly’ thing (laughs) but I couldn’t be more excited about getting here and I’ve heard overwhelmingly positive notes about this whole journey and this whole experience playing here so I’m excited.”

Vancouver fans were hoping Kloffenstein’s Texas high school teammate Jordan Groshans was going to play in YVR as well but he was promoted to Lansing instead from Bluefield. Kloffenstein believes the Jays first round pick in 2018 would have been able to thrive hitting at Nat Bailey.

He’s been playing behind me since I was like 12 and he’s a great teammate and the fans would love him. He’s not arrogant, he’s not cocky but at the same time, he’s very confident in what he does. You would see a guy that’s day-in and day-out playing the game.

I couldn’t be more excited for him to get to skip this level. I had people telling me I didn’t want to skip this level and from what I’ve seen so far, I don’t but for him obviously, the name of the game is to get to the big leagues. He’s already going faster so that’s good for him and I couldn’t be more excited. I’m hoping that one day we can play up (in Toronto) together.”

Kloffenstein was asked when was the last time he spoke with his Magnolia, High School teammate.

“(Pretends to look at a watch). A couple of hours ago. (We’re) that tight. He’s been my roommate since I got drafted. Whenever he went up to Lansing, I didn’t get another roommate.

I talk to him up there because he was in Bluefield last year but that’s not like a full season so we would talk probably once or twice a week on the phone, just telling me, ‘Hey, how’s it going here? How’s it going there? What’s it like at this stadium? That stadium?’ We’ve been keeping up with each other.

Everyone asks, ‘Am I going to miss him?’ and stuff like that. No, I like him going off and doing his thing. I’m coming here and we’re both getting to start that journey because the bottom line is if we’re separated a little bit during it, we’re hoping to make it to the same spot at the end. That’s what we’re looking forward to. I talk to him all the time.”

The pitching repertoire for Kloffenstein consists of five pitches but he has been especially focusing on one of them.

“This offseason, I started throwing like a sinker-type of deal. Like (Aaron) Sanchez. Just a very similar grip, a very simple pitch to throw but it’s more of a mental thing and just having conviction with it and being confident in it because most times when you start throwing a new pitch, it’s not going to be great overnight.

It’s something I’ve thrown a lot in extended (spring training). That’s what you’re there for. I’ve been working on it a lot and it’s running in, sinking well and the velocity is catching up to my fastball which is what we want. I’ve been working on a lot of sinker-slider combos and you’ll see that here on Friday. It hasn’t been hit yet so I’m not going to change that until someone hits it.”

C’s broadcaster Rob Fai also spoke to Kloffenstein about the pitches he throws.

Rated Baseball America‘s number 12 prospect in the Blue Jays system heading into the season, a great showing in Vancouver could find Kloffenstein with a top 10 berth, if not a top-five position, by this time next year.