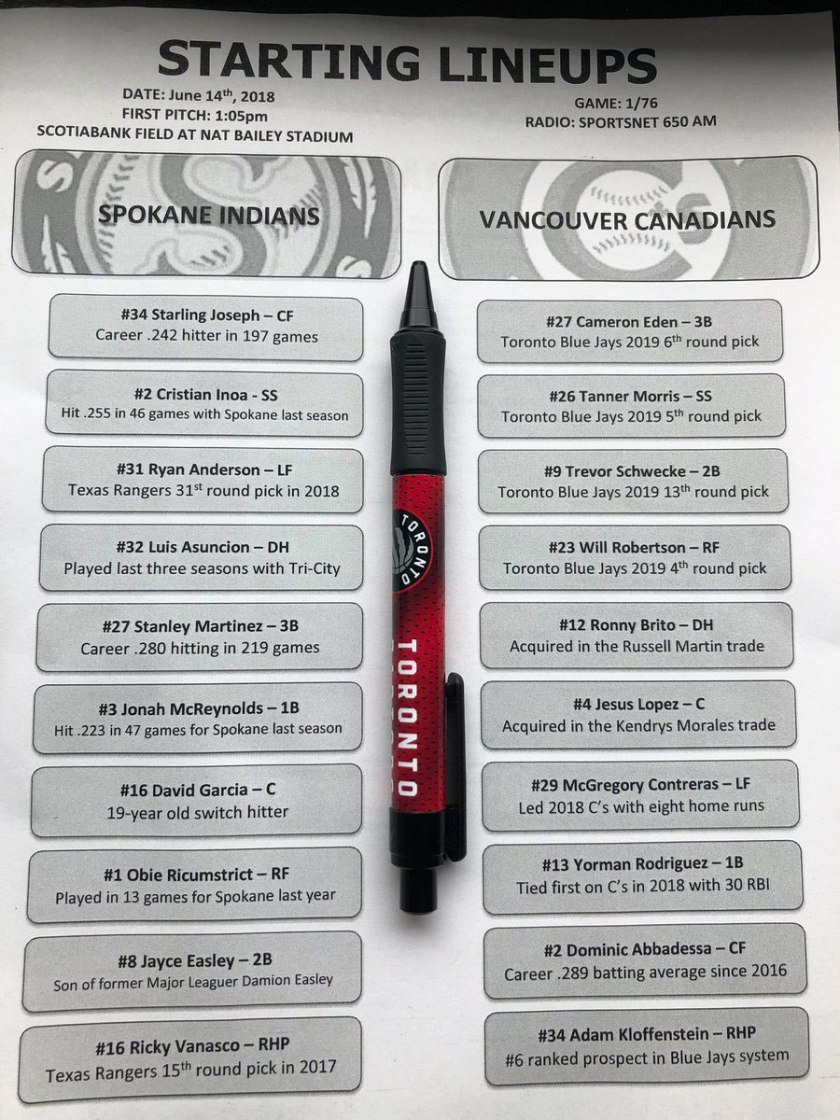 So, how ’bout them Raptors?

The championship karma of Canada’s lone NBA team did not travel west to Canada’s lone affiliated minor league baseball squad. The Vancouver Canadians had a rough day at the office in their home opener as they were spanked by the Spokane Indians 9-1 at Nat Bailey Stadium Friday.

Adam Kloffenstein struck out the side in his first inning on Canadian soil but a two-out base hit by Ryan Anderson and a two-run home run by Luis Ascunsion gave Spokane a lead they would never relinquish. Ascunsion’s drive to left glanced off the glove of McGregory Contreras and into the C’s bullpen. It looked like Contreras had a bead on it but he could not haul it in.

The 18 year-old Kloffenstein retired the side in order in the second inning but he issued a leadoff walk to Jayce Easley (son of former major leaguer Damion Easley) and he would advance to second on a groundout, make it to third on a Jesus Lopez passed ball and then score on a fielding error by Cameron Eden at third. A throwing error on an Ascunsion grounder by Kloffenstein and another passed ball by Lopez resulted in another run to double Spokane’s lead to 4-0.

19 year-old Felipe Castaneda took over for Kloffenstein in the fourth but a leadoff walk and two singles loaded the bases before a Starling Joseph single and a Cristian Inoa fielder’s choice produced two more runs.

Another leadoff walk by Castaneda led to another two-run inning for Spokane in the fifth. Gasoline was poured on the fire when Contreras muffed a fly ball to left to put runners on second and third. A sacrifice fly by David Garcia and a wild pitch by Castaneda put the C’s behind by eight.

Lefthander Nicolas Medina gave up a leadoff double to Inoa in the sixth but he was a strike away from getting out of the inning. Jonah McReynolds would single on a full-count pitch to plate Spokane’s ninth run.

Vancouver waited until the ninth inning to get their first run of the season. A one-out Lopez double off Daniel Robert was cashed in by another extra-base hit from Yorman Rodriguez with two outs.

Ricky Vanasco set the tone for Spokane with four shutout innings and seven strikeouts, allowing just two hits and two walks. His fastball was in the 95-98 mile per hour range. Teodoro Ortega got the win with two shutout innings. Nic Laio and Theo McDowell put up goose eggs of their own.

The first Vancouver hit was supplied by number nine hitter Dominic Abbadessa. The Huntington Beach, California native singled with two outs in the third. He had hits in his first two at-bats and lined out to center in a bid for a third hit. He grounded out to end the game but the center fielder made two fine running catches running back directly to the wall to end the eighth and begin the ninth.

The C’s nearly had their first hit of the season in the first inning. Tanner Morris was robbed of that honour by Anderson who made a diving catch in left field. Morris was taken in the fifth round by Toronto in this month’s MLB draft out of Virgina. He would draw a walk later on.

Vancouver’s best chance to get back into the game came in the fourth inning when they loaded the bases with two outs. Walks by Will Robertson and Lopez sandwiched a Ronny Brito single but Contreras struck out swinging on a 3-2 pitch to leave them loaded.

Robertson had a 10-pitch at-bat during the second inning, fouling off four straight pitches and working the count full but he struck out.

Nunez showed off good reflexes to snare a sharp grounder off the bat of Easley in the seventh. The radar gun—when it was working properly—had Nunez clocked from 95-97. Kloffenstein was around 93 with his heater, striking out five over his three innings.

McGuire showed off a funky delivery in which he appears to knee himself in the chest before uncoiling. The former Texas Longhorn was a pitcher and position player in Bluefield last season after being taken in the 28th round of the 2018 draft by Toronto.

Game 2 of the 2019 season goes Saturday night before a nationally televised audience. First pitch at Nat Bailey Stadium goes at 7:05 pm. The game can be seen on Sportsnet. Both Saturday’s and Sunday’s games are sold out. Rob Fai, Ricky Romero and Caroline Frolic will bring you the broadcast. Righthander Grant Townsend gets the start for the C’s,

Congratulations to 2017 Vancouver Canadians shortstop Logan Warmoth for his promotion to Double-A New Hampshire. The 2017 first rounder slashed .284/.370/.411 with Dunedin and collected three homers and 16 RBI.