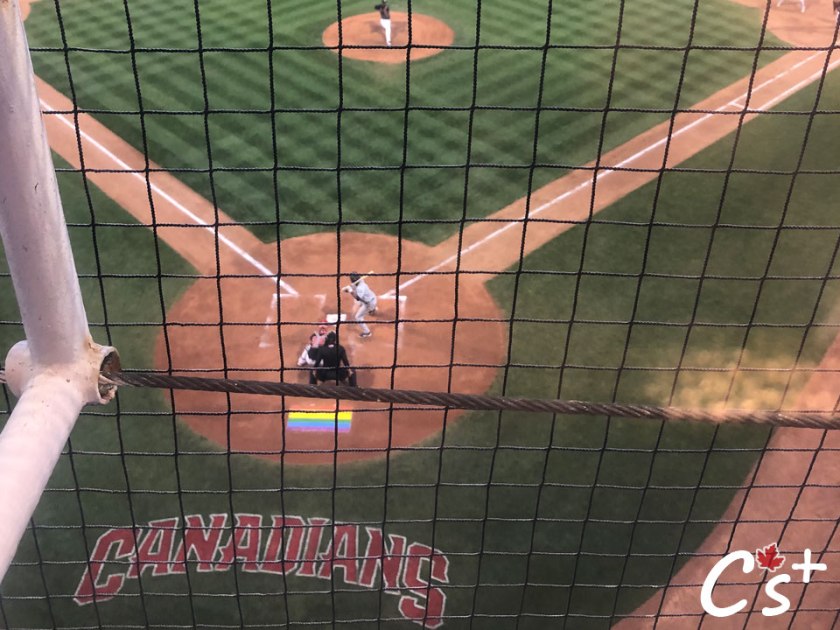 The Vancouver Canadians are still seeking their first home victory against the Everett Aquasox in 2019. The Frogs rallied from a 3-1 deficit to down the C’s 5-3 at Nat Bailey Stadium Tuesday to run their record to 4-0 in Vancouver.

Billy Cooke began the top of the fourth with a base hit against Gabriel Ponce and wound up at third after a stolen base and a throwing error by Brett Wright behind the plate. Cooke would score on a sacrifice fly to left by Connor Hoover.

After being held in check by George Kirby for the first three innings, the C’s would tie the game up in the fourth against Brayan Perez. Yorman Rodriguez singled but was forced out on the front end of a double play ball from Jesus Lopez. Will Robertson kept the inning going with an opposite field single to left to beat the infield shift. Wright then drove in Robertson with a double off the lager bottle above the manual scoreboard in center field to put the game at loggerheads.

Vancouver would break the deadlock in the fifth inning when Luis De Los Santos singled and Ronny Brito walked. A pair of two-out singles by Rodriguez and Lopez would plate De Los Santos and Brito.

The AquaSox would fight back in the sixth when a Cash Gladfelter double to right off Randy Pondler plated a pair of one-out singles by Hoover and Trent Tingelstad. The latter was blooped in front of a hard-charging Adrian Ramos in left.

Pondler gave up another two singles with one away in the seventh to Luis Joseph and DeAires Moses. A Cooke bunt moved the runners up before Tingelstad singled up the middle to score Joseph and Moses to put Everett ahead to stay. Parker Caracci was summoned from the pen to get the final out of the inning. He pitched 1-1/3 scoreless frames and Mike Pascoe followed up with a scoreless ninth. Travis Kuhn got the final seven outs for Everett to collect the save.

Vancouver hit into a pair of double plays to end the first and third innings. Lopez lined into a 6-4-3 twin-killing to force out a Rodriguez single in the first before Tanner Morris lined into a 5-3 double-trouble to end the third. The rally began with a one-out infield single to third by Brito before Ramos dropped a bunt down to get aboard. Morris hit the ball so hard at third that Lopez and Ramos were well off their respective bases but Joseph elected to throw to first to double up Ramos.

Ramos reached base with a one-out walk in the seventh but Perez struck out Morris swinging before Kuhn took over and he retired Rodriguez on a fly ball for the third out.

The C’s would bring the tying run to the plate when Cameron Eden reached base on a Joseph throwing error but Luis De Los Santos grounded into a 4-3 double play. Brito then struck out to end the game.

Right-handed reliever Andy McGuire has been promoted to Lansing. Over 12 appearances, the former Texas Longhorn collected a save and posted an earned run average of 3.91. He pitched 1-2/3 scoreless innings in his last appearance at the Nat two days ago. McGuire will rely on his ability to keep the ball down on the ground as he has posted a groundout/flyout ratio of 2.31:1.

McGuire’s #10 did not remain out of circulation for long. Caracci made his debut in #10, switching from #35. The former Ole Miss Rebel handed out a free pass to Patrick Frick before balking him to second to start the eighth before getting the next three hitters in a row.

The Canadians and AquaSox play again Wednesday at 7:05 pm. Sportsnet 650 and CanadiansBaseball.com are where you can listen in with Rob Fai.