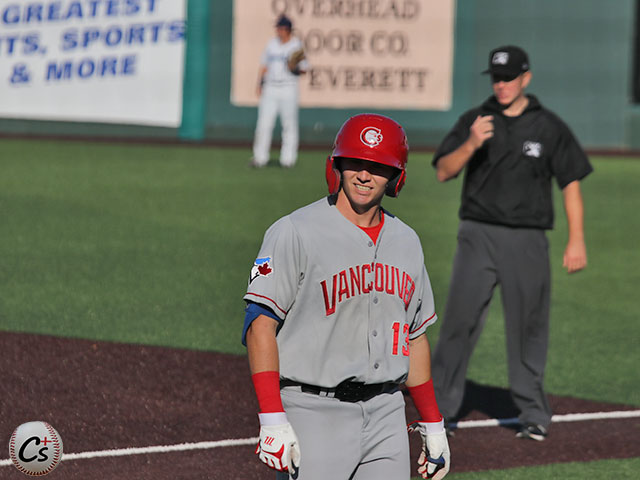 The Vancouver Canadians slugged their way out of a two-game losing streak with a 13-9 victory over the Eugene Emeralds at P.K. Park Thursday.

The Emeralds got to C’s starter Adam Kloffenstein early as Tyler Fitzgerald homered to left field on the second pitch of the game. Will Wilson then banged a double off the wall in left before Sean Roby doubled to centre to score Wilson with the Em’s second run.

Vancouver would tie the game against Emeralds starter Seth Corry in the second inning. Sebastian Espino worked a four-pitch walk and would score on a Ryan Gold double down the right field line. Luis De Los Santos would single to left on the next pitch to score Gold with the tying run.

Eugene would restore its two-run lead in the third inning when Patrick Bailey doubled home a Roby Walk and Franklin Labour grounded out to third to allow an Armani Smith single to score. Tanner Morris made a nice play on the chopper hit by Labour to throw him out at first.

The Canadians got one of those runs back in the fourth. Cameron Eden started the inning with a walk and went to second on a wild pitch. Gold was able to touch green with a single to center in front of a diving Labour to score Eden with the C’s third run.

The Emeralds answered back with a run in the bottom of the fourth against Canadians lefty Brandon Eisert. Brandon Matarano won the battle of the Brandons with a leadoff double. He would steal third before scoring on a one-out single up the middle past a drawn-in field by Fitzgerald.

Vancouver battled back again in the top of the fifth. Davis Schneider found the gap in left-center field for a leadoff double. A wild pitch with two outs moved Schneider to third before Eden was plunked on the foot. Eden showed no ill effects of the hit by pitch as he stole second. He and Schneider could take their time trotting home as Spencer Horwitz pounded the ball over the wall in right-center field fora three-run homer to give Vancouver its first lead of the night. That homer chased Corry from the game.

After Travis Perry kept the Canadians offence in check by getting the next four outs, the same could not be said of Bryce Tucker in the seventh when Vancouver blew the game open. Morris got things started with a walk, Eden was hit again by a pitch, this time in the arm, and Horwitz was walked to load the bases. Espino and Gold were also walked to bring in Morris and Eden to increase the C’s lead to three and send Tucker to the showers. Ryan Walker yielded a sacrifice fly by De Los Santos that scored Horwitz and advanced Espino to third. Eric Rivera walked to re-load the bases and a Walker wild pitch allowed Espino to cross the plate. Rafael Lantigua hit a two-out, ground-rule double to right to drive in Gold and Rivera to cap off a six-run rally.

Vancouver added one more in the eighth inning off Solomon Bates. Eden led off with a single to left and moved to second on another single by Espino to the seven-spot. De Los Santos then grounded one up the middle to score Eden.

The Emeralds made a push to get back into the game in the bottom of the eighth against Willy Gaston. Labour led off with a triple before one-out walks to Matarano and Heath Quinn loaded the bases. A Fitzgerald infield single to third scored Labour and a Wilson groundout brought in Matarano. Roby walked to fill the bases before Smith singled in Quinn and Fitzgerald. Parker Caracci took over for Gaston and despite a Gold passed ball that put two runners in scoring position, Caracci got Patrick Bailey to fly out to end the inning.

Caracci gave up a two-out double in the ninth but he struck out the first two batters he faced in the ninth before getting a game-ending flyout to center to whittle his earned run average down to 1.13.

Eisert ran his record to 4-0 with three innings of one-run ball on four hits. He struck six and walked nobody.

Kloffenstein gave up pair of runs in each of the first and third innings. In between, he struck out the side to overcome a double in the second. In total, Kloffenstein surrendered six hits and two walks and struck out four.

Connor Law made his season debut with the C’s. Wearing the same #41 he did in his tour of duty with Monty’s Mounties three years ago, Law walked Wilson and balked him over to second but he set down the next three hitters in order, including a strikeout.

The man who caught the final out had a solid game at the dish. Eden nearly hit one out in the first inning as he took Labour to the wall in center. He had a hit, two walks, two plunks, four runs scored and two stolen bases. That gives Eden the High-A West league leader in stolen bases with 27.

Morris and Schneider had a base hit and a base on balls as eight Canadians recorded at least one hit and nine reached base safely.

Gold threw out two of three Emeralds trying to steal. Lantigua kept the tag on Tyler Flores who slid past the second base bag to complete a strike ’em out/throw ’em out double play to end the third. Gold then nabbed Fitzgerald trying to swipe second in the fourth.

Game four of this series goes Friday at 7:05 p.m. Luis Quinones will be on the hill for Vancouver. The game is on MiLB.TV and CanadiansBaseball.com.

Hopefully, the game will take less than the four hours and eight minutes it took to complete Thursday night’s affair. Gone with the Wind took 10 minutes less to watch.

Richard Ureña (2014) hit a two-run homer and doubled and Nick Allgeyer (2018) gave up three earned runs in five innings and struck out six to help Buffalo slip past Syracuse 5-4. Kevin Vicuña (2017) had two hits, two RBI and a stolen base and Dany Jiménez (2017) pitched a shutout ninth for the save. Cullen Large (2017) had a hit and run batted in, Logan Warmoth (2017) singled and stole a base and Rowdy Tellez (2017) took one for the team.

Buffalo also won 8-5 over the Mets. Large had a two-run double and Jonathan Davis (2014) singled home a run. Tellez singled and was hit by a pitch. Warmoth had an RBI single among his two hits.

Samad Taylor (2017), Otto Lopez (2018), L.J. Talley (2021), Vinny Capra (2018) and Chris Bec (2018) had two-hit games as New Hampshire laid a 10-2 beatdown on Bowie. Capra hit a two-run homer while Lopez and Bec added two-run singles with Bec stealing two bases. Taylor had an RBI single and also stole a base and Tally had a run-scoring double. Brock Lundquist (2017) singled and walked twice, Nick Podkul (2018) had an RBI double and walked and Reggie Pruitt (2017) had an RBI single and a base on balls. Fitz Stadler (2017) earned the win in relief, striking out four and allowing two unearned runs in relief in two innings. Brody Rodning (2017) struck out one in a scoreless ninth.