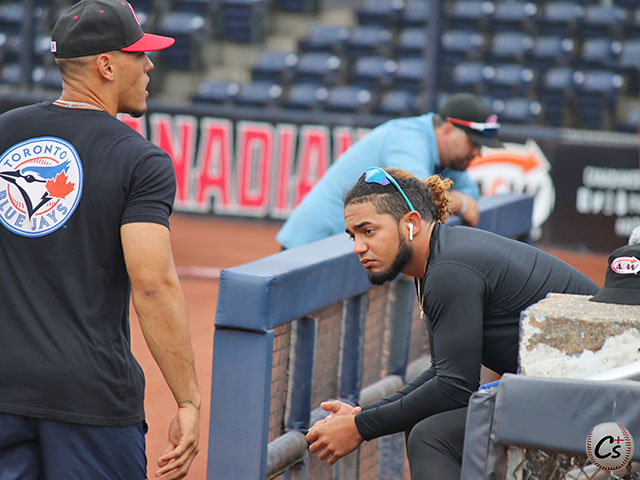 The Vancouver Canadians will not be swept by the Everett AquaSox thanks to a come-from-behind 7-6 victory at Ron Tonkin Field Saturday.

Everett scored first in the first inning as Ronny Brito‘s throwing error at third gave Patrick Frick two bases with one out. A Brian Rapp wild pitch put Frick at third before Jack Larsen doubled him put the Frogs in front.

Vancouver tied it in their first at-bat when Sebastian Espino homered to center field with two outs off Fred Villarreal.

Everett recaptured the lead in the second off Rapp. A one-out walk to Dariel Gomez and a two-out free pass by Joseph Rosa were scored by a Victor Labrada base hit and another error at third by Brito on a grounder by Frick.

The scoring did not resume until the eighth inning when the AquaSox added a run off Justin Maese in the eighth. Larsen started the inning with a walk and was doubled over to third by Tyler Keenan. Larsen would tag up and score on a Kaden Polcovich sacrifice fly to up Everett’s lead to 4-1.

The Canadians would fight back with a big eighth inning. Spencer Horwitz and Ryan Gold worked back-to-back one-out walks to force Franklin Van Gurp‘s exit from the game. Philip Clarke singled to center field on the first pitch from David Ellingson to drive in Horwitz before Brito’s base hit to left scored Gold from third two pitches later. The C’s would catch a break when Rafael Lantigua reached base on a fielder’s choice. Keenan dropped the ball at third as Frick tried to throw out Clarke on Lantigua’s grounder to short. Eric Rivera brought in the tying run on a 4-6 fielder’s choice as the AquaSox could not turn an inning-ending double play. Luis De Los Santos then beat out a tapper on the mound to score Brito with the go-ahead run to make it 5-4 Vancouver.

The C’s turned it over to Parker Caracci in the ninth but he hit Rosa with a full-count pitch with one out. Rosa stole second and scored the tying run when Frick doubled to right.

Everett would grab the lead again in the top of the 10th off Caracci. With Larsen as the placed runner on second base, Caracci gave up an RBI double to his former Ole Miss teammate Keenan. Caracci to give Everett a 6-5 lead.

Winnipeg native Ben Onyshko was called in to close out the game for the Frogs but the lefty from Stetson ran into trouble by walking Brito on four straight pitches. He then plunked Lantigua to load the bases, pushing Clarke as the placed runner over to third. Onyshko rallied to strike out Rivera and Luis De Los Santos and was one strike away from ending the game before he drilled Will Robertson in the back on a 1-2 pitch. That allowed Clarke to trot home with the tying run. Onyshko was then a strike away from forcing the game to the 11th inning by getting ahead of Espino at 1-2 but wound up walking him to score Brito with the winning run.

It did not look like it was going to be the Canadians night after what transpired in the bottom of the second. Gold singled, Clarke was hit by a pitch and Brito walked to load the bases against Villarreal with nobody out. That produced a visit to the mound from AquaSox pitching coach Sean McGrath and what he said obviously worked as Villarreal got Lantigua to pop up to first, struck out Rivera looking and retired De Los Santos on a fly ball to right to send the C’s away empty-handed.

Horwitz singled in the third and Lantigua walked with two outs in the fourth but that was all Vancouver could produce against Villarreal.

Igor Januario mowed down the C’s in order in the fifth and sixth innings, striking out four in a row as he whiffed the side in the sixth. Januario’s string of seven in a row retired came to end when he nailed Lantigua with a pitch. Van Gurp took over and surrendered a Rivera single before retiring the next two men he faced to strand Lantigua and Rivera.

The C’s had a chance to walk it off in the ninth. Espino was hit by a pitch before he was forced out on a 4-6 play by Horwitz. Gold then doubled to the right field corner and Horwitz tried to score from first but he was cut down on a 8-4-2 play at the plate. Gold made it to third on the play but Clarke popped up to short to send the game in overtime.

Gold led Vancouver with a quarter of its eight-hit total and drew a walk to get on base three times. Espino added a walk and a hit by pitch to his fourth homer of the year. Brito had a single and two walks and Lantigua also got aboard three times without a hit as he heard ball four and took one for the team twice.

Horwitz reached base twice with a single and a walk while Clarke singled and was tattooed by a pitch. All nine Canadians did get aboard safely with seven getting at least a hit. They were just 3-for-14 with runners in scoring position, leaving a baker’s dozen on the base paths.

Rapp gave up three runs in 2-2/3 innings of work but only one run was earned. He gave up two hits and three walks in his return from back tightness. Rapp had not pitched since July 15 but was not placed on the injured list.

Lefty Sean Mellen stranded a runner for Rapp and with so much going on in this game, Mellen’s efforts get buried. All he did was retire all 10 men he faced, striking out four and getting four outs on the ground.

Justin Maese had to dodge a bullet in the seventh. He walked David Sheaffer to begin the frame and gave up a single to Rosa to put runners on the corners. Maese induced a tapper back to the mound from Victor Labrada and threw out Rosa at second on a 1-6 force play to hold Sheaffer at third. Clarke then threw out Labrada trying to steal second and Maese ended the threat by getting Frick to ground out to short. Maese’s final line was a run on two hits and two walks over two innings.

Caracci blew the save but got the win instead. He was charged with two runs (one earned) on three hits over two innings but struck out three. Caracci was able to regroup after losing a head-to-head battle with Keenan. He allowed a Polcovich infield single to third but got Dariel Gomez to ground into an inning-ending 5-4-3 double play to keep Everett’s lead at one.

Vancouver remains tied with Spokane for third place in the High-A West with identical 33-38 records, they are both 8-1/2 games behind Eugene for the second and final playoff berth. Hillsboro is just one game back of Vancouver and Spokane with Hillsboro even in the loss column at 38 with two fewer games played.

The Canadians will try to salvage one more game agains the league-leading AquaSox in the 1:05 pm finale on CanadiansBaseball.com. Paxton Schultz gets the ball for Monty’s Mounties against Taylor Dollard.

Buffalo won its fifth in a row over Syracuse 6-3 Saturday.

New Hampshire was shutout by Reading 6-0.

Cavan Biggio had a base hit and Tim Mayza and Tayler Saucedo pitched two-thirds of a scoreless inning apiece as Toronto trounced the New York Mets 10-3.