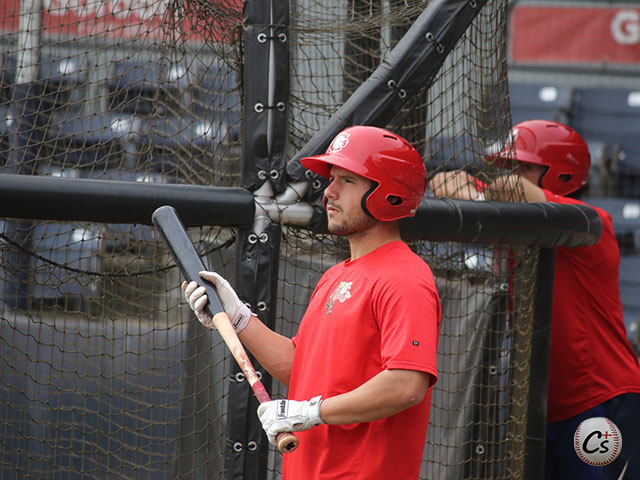 The Vancouver Canadians have scored 21 runs in their last two games but they have no victories to show for it as they lost 15-11 to the Spokane Indians at Avista Stadium Friday.

Life came pretty fast at Spokane starter Helcris Olivarez in the first inning. Luis De Los Santos singled to left on the first pitch of the game and Will Robertson doubled to left on pitch number two to score De Los Santos to give Vancouver a 1-0 lead. Pitch number three saw Sebastian Espino get aboard on an infield single to first. A throwing error by Olivarez on a pickoff attempt allowed Robertson to come home with the C’s second run. Spencer Horwitz then walked on four straight pitches before Rafael Lantigua singled to left that went off Isaac Collins at second base to bring home Espino and get Horwitz over to third. Lantigua stole second before Davis Schneider‘s sacrifice fly to center scored Horwitz. Lantigua was stranded at third as Ronny Brito and Andres Guerra both grounded out to short.

Vancouver’s 4-0 lead disappeared four batters later as Michael Toglia hit a grand slam off Brian Rapp to cash in a Collins leadoff single and two walks by Daniel Montano and Colton Welker. Niko Decolati then doubled before Rapp retired the next three hitters to keep the game tied.

The Canadians got back to work against Olivarez in the second. D.J. Neal doubled on the first pitch to center field before Robertson drew a one-out walk and Horwitz worked the count to ball four with two outs to fill the bases. Lantigua doubled to center to drive in Neal and Robertson before Schneider went deep to right-center field for a three-run home run to put Vancouver up 9-4.

Alex Nolan took over for Rapp in the second inning but Spokane would chip away when Colton Welker‘s two-out double drove in a Collins one-out single.

The home side would draw even closer in the third when Harris homered to left-center off Nolan to score base hits by Decolati and Kyle Datres to make it a one-run game.

Vancouver would expand their lead in the fourth off Moises Ceja when Brito drilled a two-run home run to plate a Schneider one-out single to make it 11-8 for the visitors.

The Spokane bats would not lay down as they began their comeback in the fifth off Nolan. Walks by Harris and Blomgren sandwiched a single by Daniel Cope to load the bases with nobody out. Nolan struck out Collins before turning the ball over to Will McAffer and he walked Montano on four straight pitches to send Harris home. McAffer rallied to get Welker and Toglia on called strike threes to end the threat.

Spokane would take the lead for good in the sixth off McAffer. A Decolati double and walks to Datres and Harris loaded the bases for Cope and he emptied them with a grand salami to right field. Collins joined the home run derby one out later by drilling one to left-center to make it 14-11 Spokane.

Parker Caracci—who was called upon to get the final out of the sixth inning—could not emerge unscathed earlier as he was gonged for a Toglia home run to start the seventh.

Vancouver was on the verge of scoring for the third straight inning to begin the game. Neal singled to left and stole second base to commence the frame and advanced to third on a De Los Santos groundout to first. Robertson struck out before Eric Rivera kept the inning going with a walk to send Olivarez to the showers. Ceja stranded the runners at the corners by getting Horwitz to ground out to first.

Brito’s two-run homer might have been a three-run shot in the fourth but Lantigua’s leadoff single was erased when he tried to make it into second but was thrown out on a 9-6 play.

The C’s also had something cooking in the fifth when Rivera’s one-out single up the middle was followed by a Horwitz walk but Lantigua popped out to second before Schneider was retired on a fly ball to center.

Andres Guerra got aboard on a one-out walk from Dugan Darnell in the sixth but was forced out at second on an inning-ending 4-6-3 double play from Neal.

Vancouver had two runners on in the seventh on an infield single to third from De Los Santos and a two-out single to center by Horwitz but Lantigua tapped out to the mound for the third out.

A Schneider leadoff single against Alex Moore produced no runs either despite a wild pitch by Moore moving Schneider to second with one away. That was the last threat for Vancouver as they were retired 1-2-3 in the ninth for the first time in the game by Fineas Del-Bonta Smith.

Schneider and Lantigua led the Canadians attack with three hits apiece with Schneider driving home four runs and Lantigua knocking home three. De Los Santos and Neal had two-hit efforts at the top and bottom of the order. Lantigua and Neal also stole a base with Lantigua up to 13 swipes on the year and Neal up to nine. Horwitz was the on-base leader with a hit, two walks and a hit by a pitch.

Robertson, Rivera, Brito and Guerra each had a hit and a walk. All 10 Canadians hitters had at least one hit with Rivera replacing Espino in left field in the bottom of the second. Espino was injured on Welker’s RBI double.

Rapp was rung up for four runs on three hits and two walks, throwing 35 pitches in his only inning of work.

Caracci gave up just a run on three hits and struck out three in 2-1/3 innings.

Vancouver’s record is now 34-42, leaving them a half-game back of Hillsboro for fourth place and two games off the pace from Spokane. The C’s are now 10 games behind Eugene for the final playoff spot.

Paxton Schultz will be on the hill for Vancouver and he’ll pitch against Noah Davis in another 6:30 pm first pitch on CanadiansBaseball.com.

It’s been a long slog for anyone working at Avista Stadium this week. All four games have exceeded three-and-a-half hours. Tuesday’s series opener was the shortest at 3:34, Wednesday’s was three minutes longer but Thursday and Friday’s games were five minutes short of the four-hour mark. Pace of play has been at a snail’s pace. Coffee and pop sales must be brisk at the ballpark.

Congratulations to Ryan Gold as the left-handed hitting catcher has been promoted to Double-A New Hampshire. Gold made just one error in 27 games behind the dish, throwing out 32 percent of would-be basestealers to go along with a .766 OPS for the C’s. I had a chance to chat with Ryan and he was incredibly generous with his time talking about his career and sharing some observations on the pitchers he has worked with this season. I wish him the very best with New Hampshire.

The Toronto Blue Jays are back home at the SkyDome for the first time in nearly two years but Vancouver Canadians fans are still wondering if they’ll see Monty’s Mounties at Nat Bailey Stadium in 2021. The Canadians have announced they will remain in Hillsboro for the month of August as tickets for their August 17-22 series against the Tri-City Dust Devils are now on sale at Ron Tonkin Field.

The Canadians final homestead of 2021 is set for September 7-19 with six-game series against Spokane and Hillsboro to conclude the season. Word on whether the team will return to 4601 Ontario Street will probably come down in the latter part of August.It just sucks that everybody else in the affiliated minors have games to host while the C’s remain on the sidelines thanks to the ongoing pandemic.

Tim Mayza retired all five men he faced, striking out two for his 12th hold of the year in Toronto’s 6-4 win over Kansas City in their return to the Dome.

Rowdy Tellez was 1-for-5 as Milwaukee downed Atlanta 9-5.