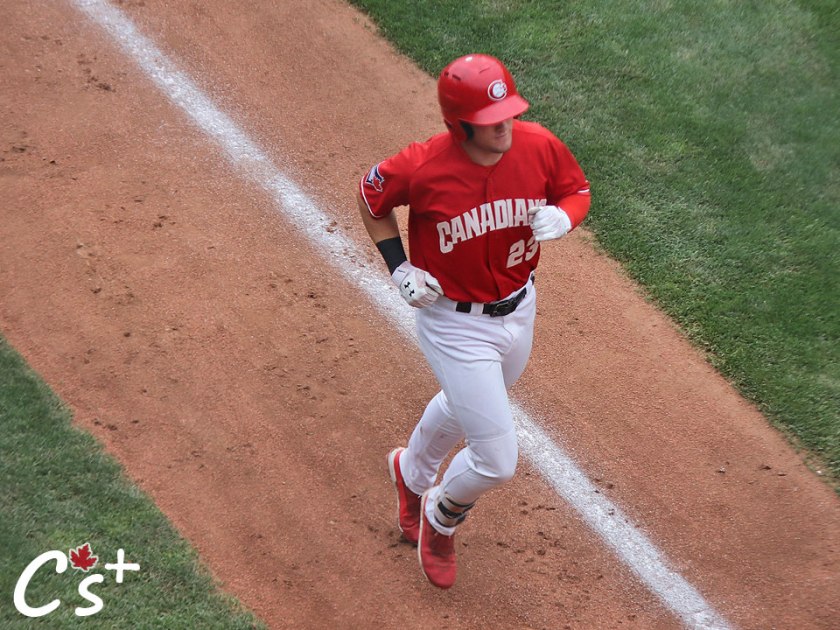 The Vancouver Canadians have a chance to win a series for the first time in two months, assuring themselves of at least a split after an 11-6 victory over the Everett AquaSox at Everett Memorial Stadium Saturday.

The C’s wasted little time in opening up the scoring. Luis De Los Santos tripled to center field on the third pitch of the game from Everett starter Bernie Martinez and would score on an Orelvis Martinez sacrifice fly. Will Robertson—who was hit by a pitch before Martinez’s sac fly—would get to third on a Spencer Horwitz single to center and an error by Victor Labrada before crossing the plate on a Sebastian Espino base hit.

Vancouver continued to pile on the runs in the second. Rafael Lantigua led off with a double to left and stole third base before coming home one out later on a Zac Cook home run to right-center. A double to center by De Los Santos was driven in by a double to left by Robertson and Horwitz brought in Robertson with a base hit to right to make it 6-0 C’s.

The Canadians scored again in the third against Frogs Reliever Tyler Driver. A one-out bunt single and throwing error by Driver put Lantigua at second base before Eric Rivera picked up an RBI single to left to give Vancouver a converted touchdown lead.

Everett finally solved C’s starter C.J. Van Eyk in the fourth inning. Connor Hoover was hit by pitch just two pitches into the inning and scored on a Jake Anchia home run to right to cut Vancouver’s lead to five.

Lantigua would ignite another rally in the fifth. He was hit by a pitch from Driver, went to second on a Rivera groundout to the right side on the infield, stole third base and scored on a Cook double to center. Two wild pitches from Driver would get Cook home to restore the Canadians seven-run lead.

A two-out rally in the sixth led to Vancouver’s 10th run. Espino drew a walk, got into scoring position on another wayward pitch from Driver and scored on a Clarke base hit to center which sent Driver to the showers.

The AquaSox matched that run in the bottom of the sixth. Dariel Gomez doubled off Hayden Juenger with one out and scored on an two-out extra-base hit by Matt Scheffler.

Vancouver got its last run in the seventh against Igor Januario. A one-out walk to Cook and a passed ball by Anchia was knocked home by a Robertson double to center.

Everett answered back again in the bottom of the inning. Labrada’s one-out walk led to Juenger getting the hook from C’s manager Donnie Murphy. A wild pitch by Andrew Bash, a Hoover grounder to second and another pitch to the backstop got Labrada around the rest of the bases to make it an 11-4 game.

The AquaSox rounded out the scoring in the ninth when Hoover’s one-out homer to right off Bash scored a leadoff double from Cody Grosse.

The Canadians had a chance to add more runs in the first inning with runners on the corners with one out but Clarke lined into a 6-3 double play that doubled off Espino after his RBI single. Another Clarke double play ball of the 5-4-3 variety spoiled a bases loaded situation after Robertson drew a leadoff walk, followed by one-out free passes to Horwitz and Epson

Vancouver loaded the bases again in the eighth. Espino forced out a Horwitz leadoff single in the eighth and Clarke was hit by the final pitch from Januario. The second pitch from Nolan Hoffman resulted in a single to right by Lantigua to fill the bags but Rivera struck out and Cook grounded out first.

Robertson singled with one away in the ninth to give the C’s at least one baserunner for all nine innings.

The hit leaders for Vancouver were Robertson, Horwitz and Lantigua with three apiece with Robertson getting on base five times with a walk and a hit by pitch. Lantigua was aboard four times as he also took one for the team and stole two bases to give him 16 on the year. De Los Santos and Cook had two hits apiece with Cook adding his fourth homer of the season into the mix.

The only Canadians hitter not to get on base was Martinez but he did produce a sac fly to put Vancouver on the board. Vancouver was 9-for-19 with runners in scoring position, leaving 11 men on.

Van Eyk earned his fourth win of the year against six losses by pitching five innings of two-run ball, scattering three hits, three walks and a hit by pitch to go along with seven strikeouts.

The Florida State Seminole got an inning-ending 6-3 double play from Cade Marlowe to erase a one-out walk by Hoover in the first. He struck out the side in the fourth after giving up Hoover’s two-run dinger and escaped a bases loaded jam in the fifth with one out by striking out Hoover looking and getting Marlowe to pop up to short with his 88th and final pitch.

The C’s record now stands at 40-49 on the season. The series finale goes at 4:05 pm today. Everett says TBD is its starter. Vancouver is going with Adam Kloffenstein. The game can be heard on CanadiansBaseball.com.

All the best to 2016 Canadians righthander Patrick Murphy who was claimed off waivers by the Washington Nationals where he will join 2015 C’s outfielder Lane Thomas—traded by St. Louis for lefty Jon Lester at the trade deadline—and 2017 catcher Riley Adams in the Nats organization.

Murphy made his big league debut last season with Toronto and allowed just one run over six innings covering four relief appearances. The 26 year-old from Chandler, Arizona got into eight games with the Blue Jays this season, going 0-1 with a 4.82 earned run average. With Vancouver, Murphy was posted a 2.84 ERA over 13 starts covering 69-2/3 innings.

Harrisburg rallied with a four-run ninth to walk off New Hampshire 7-6.

Dunedin swept a doubleheader against St. Lucie, winning 5-3 in Game 2.

Rowdy Tellez was 1-for-3 in Milwaukee’s 14-4 loss in Pittsburgh.

Miguel Castro struck out two in a shutout inning in the New York Mets 2-1 loss to the Los Angeles Dodgers.