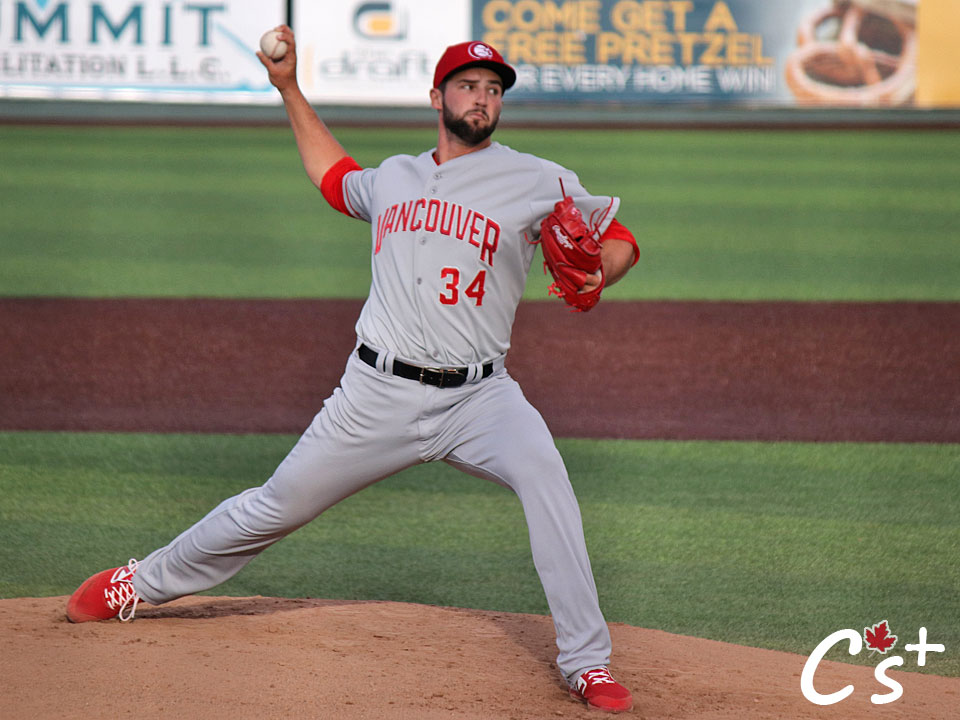 The Vancouver Canadians are playing the spoiler role after a 5-2 win over the Everett AquaSox at Everett Memorial Stadium Thursday.

Vancouver starter Adam Kloffenstein matched zeroes with Everett’s Adam Hill for the first four innings but Hill finally flinched in the fifth. Philip Clarke dropped down a bunt single on Hill’s first pitch of the inning and Sebastian Espino watched four pitches miss the strike zone for a walk. Both runners moved up on a Davis Schneider groundout to second before Trevor Schwecke was hit by a pitch to fill the bases. Zac Cook then took one for the team to score Clarke with the game’s first run. A sacrifice fly to left field by Tanner Morris allowed Espino to score before Spencer Horwitz’s single to right brought in Schwecke to make it 3-0 Vancouver.

Clarke started another rally in the sixth with a one-out double to center and ran to third on a wild pitch from Hill. Davis Schneider hit a two-out ground ball to Liam Sabino at second base but Sabino booted it and that brought in Clarke to up Vancouver’s lead to four.

The AquaSox finally solved Kloffenstein with one out in the sixth when Victor Labrada homered to left field. A Tyler Keenan walk was forced out by a Kennie Taylor 5-4 fielder’s choice and that was the end of the night for Kloffenstein. C’s manager Donnie Murphy brought in Justin Maese who gave up a single on a 2-2 pitch to Joseph Rosa to move Taylor to third. Two wild pitches later, Taylor would score to cut the deficit to 4-2.

Vancouver would score again in the seventh off Frogs reliever Bernie Martinez. Another hit by pitch to Cook started the inning and he was able to make it to third on a Morris base hit to right. Cook would make it home on a Horwitz sac fly to right.

The Canadians only had two baserunners over the first four innings. Cook drew a walk to begin the game but the next time Vancouver got someone on base was Orelvis Martinez, who got to first on a strikeout/wild pitch with two outs in the fourth.

Vancouver had two opportunities to add more insurance runs in the last two innings. A leadoff single to center from Clarke and a one-out knock to left by Schneider against Fred Villarreal in the eighth were nullified by a Schwecke 4-3 inning-ending double play. In the ninth, a Morris base hit to left, a Horwitz hit by pitch and a Martinez walk loaded the bases with one out but Will Robertson struck out swinging and Clarke grounded out to first to end the threat.

Clarke had three hits, including his 15th double of the year. Morris had two hits and Horwitz and Schneider had the other base knocks. Cook was on base three times with a walk and two plunks.

Morris and Horwitz now have 21-game hitting streaks with Morris also having reached base safely in his last 30 contests.

Kloffenstein worked 5-2/3 innings of two-run ball, allowing two hits, three walks and a hit by pitch. He struck out five and got seven of his nine outs in play on the ground to collect his seventh win of the year. Maese allowed an inherited run to score but did not give up any of his own over 1-1/3 innings, giving up a hit and a walk. Roither Hernandez struck out one in a one-hit eighth and Hagen Danner worked a perfect ninth, striking out the last two hitters for his third save of the year.

The AquaSox Cody Grosse was hit by a pitch to begin the third inning and left the game with an injured ankle. The C’s also had to make a substitution when Espino was replaced in left field in the bottom of the sixth after striking out in the top half of the frame. That led to an outfield shuffle of Cook moving to left from center field, Robertson moving from right to center and Eric Rivera entering the game in left.

Vancouver is one win shy of the 50-win mark at 49-56, trailing Everett and Spokane for top spot in the High-A West by 10 games with Eugene just one-half game behind.

Andrew Bash gets the start for Vancouver in a 1:05 pm contest. Everett has not said who will be throwing the first pitch. The game can be heard on CanadiansBaseball.com.

2012 Vancouver Canadians outfielder and former Blue Jay Dalton Pompey was released by the Los Angeles Angels according to the latest minor league transactions column from Baseball America. The Mississauga, Ontario native hit .247 with the Double-A Rocket City Trash Pandas in 27 games but hit .367 in 10 contests for the Triple-A Salt Lake City Bees before his release August 24.