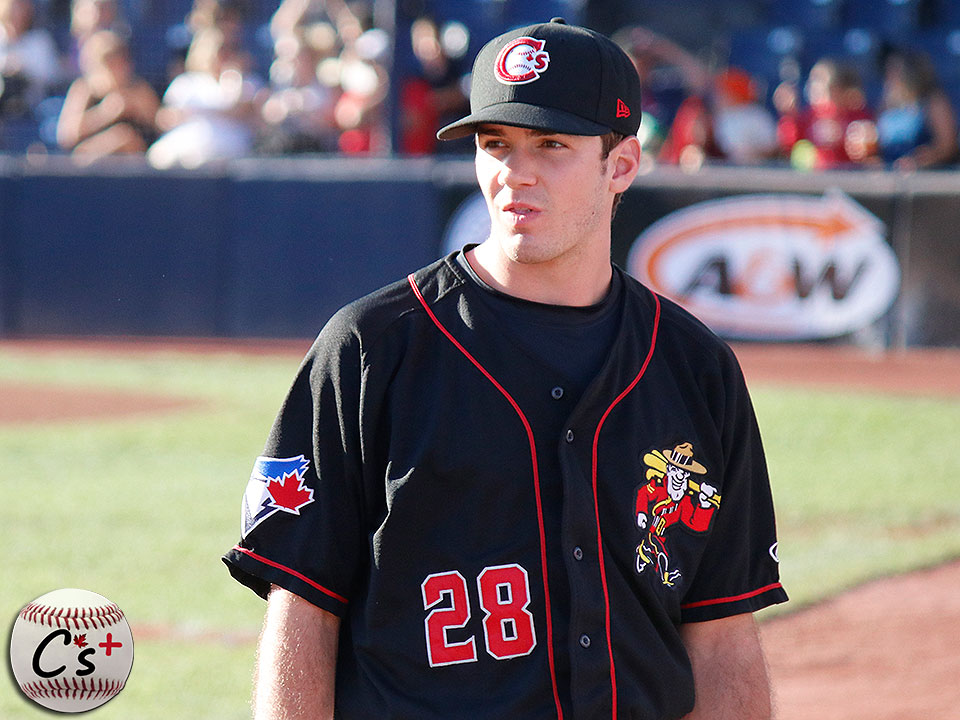 A key member of the 2017 Northwest League champion Vancouver Canadians has a new major league home.

The 25 year-old Logue was a ninth-round pick of the Blue Jays in 2017 out of Kentucky University where his younger brother Seth Logue is currently pitching. Zach got his feet wet at the professional level at Bluefield with five shutout innings over three appearances, earning his first professional win against Bristol with two scoreless frames and three strikeouts July 1.

Logue then earned a promotion to Vancouver July 14 and made an immediate impact by striking out five men over two innings, allowing just an unearned run against Spokane at Nat Bailey Stadium. His first win as a member of Monty’s Mounties came in Salem-Keizer July 20 when he spun three shutout innings, allowing just a hit and a walk while whiffing four. Those contributions helped the C’s clinch the first-half North Division playoff title.

Logue’s best outing came at the Nat against the Everett AquaSox when he tossed four goose eggs and collected five strikeouts August 22. He finished the regular season with a 3-1 record and a 1.75 earned run average with a 28-6 strikeout/walk total in 25-2/3 innings.

In the postseason, Logue pitched four more shutout innings in Vancouver’s Game 2 win over Spokane to help them advance to the final. He also earned the win in the clinching Game 4 against the Eugene Emeralds as the C’s celebrated their fourth Northwest League championship.

The 6-foot-0 southpaw has made the steady climb up the minor league ladder, spending time with Double-A New Hampshire and Triple-A Buffalo in 2019 and 2021. Overall, the Mason, Ohio native has compiled a 32-16 record and a 3.43 earned ERA over his four-year career.

Logue was added to the Toronto Blue Jays 40-man roster and was in line to make his major league debut at some point during the 2022 season. Now his chances of reaching the bigs has increased as Oakland looks to rebuild again, having already traded Chapman to Toronto and first baseman Matt Olson to Atlanta.

All the best to Zach Logue with the A’s. You can learn more about Zach in a chat C’s Plus Baseball had with him after the 2017 season. Logue will turn 26 on April 23.

Since arriving in Vancouver before the 2012 season, Barreto has been the best all-around hitter to play at Nat Bailey Stadium in my opinion. The Caracas, Venezuela native slashed .311/.384/.481 with six home runs and 61 runs batted in with 23 doubles, four triples and 29 stolen bases in 2014, leading the C’s to a fourth straight appearance in the Northwest League final.

Barreto made it to the majors with Oakland in 2017 and spent parts of the 2018 and 2019 seasons there before he was traded to the Los Angeles Angels for Tommy La Stella during the 2020 season. The 5-foot-10 righthanded hitter played in just six games with the Halos that year. He underwent Tommy John surgery on his right elbow last year and is currently a free agent.

Staying with the 2014 Canadians, second baseman Tim Locastro is back with the New York Yankees after signing a one-year deal. Like Barreto, Locastro made his major league debut in 2017 with the Los Angeles Dodgers after being traded by the Blue Jays for international bonus pool money, freeing up the cash for Toronto to sign Vladimir Guerrero Jr.

After getting cups of coffee with the Dodgers in 2017 and 2018, Locastro saw his first extended action with Arizona from 2019 to 2021 before being traded to the Yankees. The Syracuse native had his season with the Bronx Bombers cut short by a knee injury. Locastro—now an outfielder—will turn 30 years old July 14.

2013 Canadians pitcher Chase De Jong—also traded with Locastro to the Dodgers has rejoined the Pittsburgh Pirates on a minor league deal. Also making his major league debut in 2017 with Seattle, the 6-foot-4 righthander has spent time with Minnesota and Houston before joining the Bucs in 2021. De Jong pitched one shutout inning for the C’s in the 2013 playoffs against Everett and was on the field to celebrate Vancouver’s third straight Northwest League title over Boise at Nat Bailey Stadium.

2016 C’s utilityman Nash Knight is with the Texas Rangers organization according to this tweet from Lansing Lugnuts broadcaster Jesse Goldberg-Strassler. Knight had been in the Jays system in 2015 and batted .261 in 24 games with Vancouver in 2016. He was with Triple-A Buffalo last year.

As alluded to by Canadians president Andy Dunn, there will be some rule changes in minor league baseball for 2022 including a pitch clock at Nat Bailey Stadium.