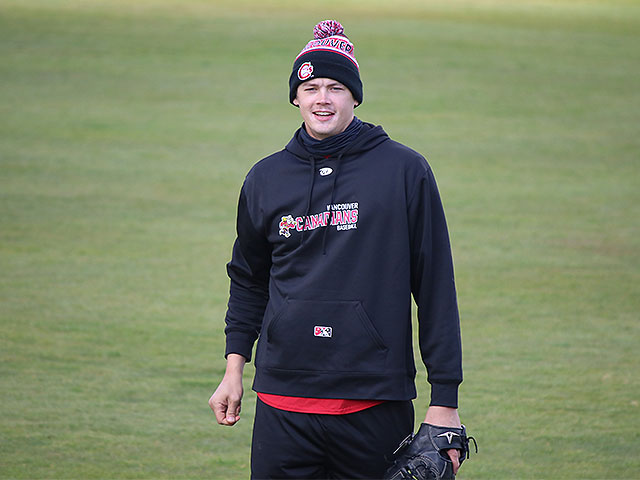 The Eugene Emeralds evened the series at two games apiece against the Vancouver Canadians with a 7-3 victory at Nat Bailey Stadium Saturday afternoon.

The Emeralds opened the scoring again for the fourth time in as many games with a home run as Jimmy Glowenke took Vancouver starter Adam Kloffenstein out of the park to left-center field to begin the third inning. Ghordy Santos then made it back-to-back jacks by homering over the fence in right-center to make it 2-0 Eugene.

A throwing error by Miguel Hiraldo at second base on a routine ground ball to second base by Hunter Bishop helped the Emeralds start another rally in the fourth. A one-out double by Luis Toribio down the right field line brought Bishop home and Toribio would score on a Casey Schmitt two-base hit to left to increase Eugene’s lead to four.

The Canadians collected their first run in the bottom of the fourth. A throwing error by Santos at short allowed P.K. Morris to get to first base with one out. Santos’ throw brought Toribio off the first base bag as he had to jump to catch the ball. A two-out walk by Zach Britton from Emeralds reliever Jake Wong got Morris over to second before Hiraldo got Vancouver’s first hit with a single to left to drive in Morris to make it a 4-1 game.

Eugene scored for the third inning in a row by nicking C’s southpaw reliever Abdiel Mendoza for a run in the top of the fifth. A four-pitch walk to Luis Matos and another free pass to Marco Luciano started the trouble. An Armani Smith fly ball to left allowed Matos to tag up and get to third. Hunter Bishop hit into a 6-4 fielder’s choice but beat the relay throw to first to allow Matos to score the Emeralds fifth run.

The Canadians fought back with a pair of runs in their half of the fifth. Trevor Schwecke delivered a leadoff single to left off Wong and that was followed by a bunt single to third by Garrett Spain. Leo Jimenez hit a grounder to first that Toribio was able to pick at first and he threw the ball to short for a 3-6 force out to get Spain but Santos’ throw was off the mark and that allowed Schwecke to cross the plate. Jimenez got himself into scoring position by stealing second base and he would come in to score when Morris punched a base hit up the middle.

Eugene went back at it in the sixth against Mendoza when Schmitt snuck a double down the left field line past a diving Riley Tirotta at third base with Tirotta slapping the ground in frustration. A one-out walk by Santos was the last batter Mendoza faced. Lefty Sean Mellen came in and drilled Matos in the knee with his first pitch, sending Matos to the deck in agony. Matos shook it off as the Emeralds loaded the bases for Luciano and he singled to right out of the reach of Schwecke to score Schmitt, making it a 6-3 game.

Eugene closed out the scoring in the eighth when Smith took Mellen deep over the wall in right-center for a two-out solo shot.

Eugene’s first baseman Toribio had a run-in with the tarp while trying to chase down a foul popup by Hiraldo in the second inning but he was able to stay in the game.

Vancouver did not get its first baserunner against Eugene starter Randy Rodriguez until there was one out in the third. Schwecke was able to reach on an error by Santos at short and would steal second base with two outs but Jimenez lined out to left to end the inning.

Hiraldo had a one-out double in the sixth but was picked off by Wong when he danced too far off the bag and stumbled, allowing Glowenke to put the tag on him for the 1-4 putout.

Spain had a one-out base hit in the seventh to chase Wong from the game but Clay Helvey got two ground ball outs to keep Vancouver off the board.

Davis Schneider drew a one-out walk in the ninth against Nick Avila to represent the C’s last baserunner.

Hiraldo and Spain represented two-thirds of Vancouver’s hit total with two apiece with Morris and Schwecke also recording base knocks. Schwecke and Jimenez each stole a base. Britton and Schneider heard ball four once.

Addison Barger saw his 11-game hitting streak come to an end by going 0-for-4 as the designated hitter.

Kloffenstein took the loss as he gave up a run an inning over four frames. Three of the runs were earned on five hits and a walk. He struck out four with four of his nine outs in play on the ground.

Mendoza was charged with two runs on one hit and four walks, striking out one over 1-1/3 innings. Mellen allowed one of two Mendoza runners to score and gave up a run on four hits, a walk and a hit by pitch over 2-1/3 innings, striking out four.

Thomas Ruwe turned in the best line on the mound for the C’s, punching out two of the four batters he faced in a perfect 1-1/3 innings.

Vancouver could not come back yesterday but six of their eight wins saw them trail after five innings before rallying for the victory. Hat tip to C’s broadcaster Tyler Zickel for that nugget of wisdom in the press notes.

The Canadians and Emeralds conclude their series Sunday afternoon in another 1:05 p.m. start at The Nat. Righthander Trent Palmer gets the ball for Vancouver.