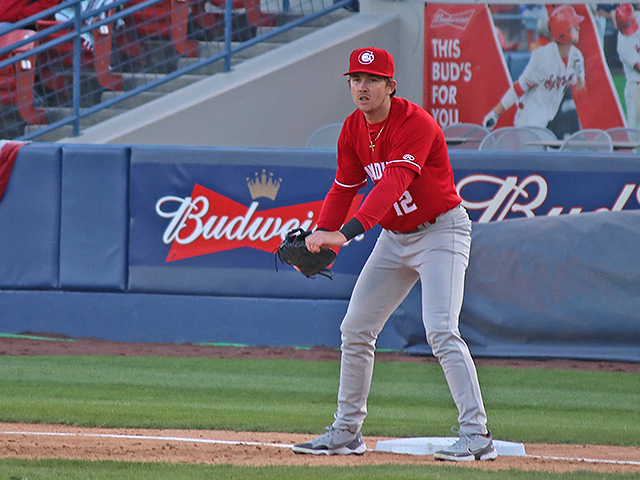 The Vancouver Canadians found a new rock bottom by following Wednesday’s disappointing loss with another gut-wrenching defeat, falling 9-8 to the Hillsboro Hops in 10 innings at Ron Tonkin Field Thursday.

The C’s were on the scoreboard first in the third inning. Mack Mueller beat out a slow bouncer to third for a leadoff single before Leo Jiménez took a 3-2 pitch from Hops starter Jamison Hill off the left elbow to reach base. One out later, P.K. Morris drove a single up the middle to score Mueller.

Vancouver chased Hill from the game in the fourth with a leadoff walk from Davis Schneider. Collin Sullivan came out of the Hops bullpen and walked Hugo Cardona with one out before Mueller took him deep for a three-run home run to left-center. Jiménez made it back-to-back home runs by lifting one over the fence the left. A two-out triple to deep left-center by Morris would Sullivan to the showers. Julio Frias came in to the game and threw a wild pitch to score Morris to make it 6-0 Vancouver.

Hillsboro got to C’s starter Naswell Paulino in the fourth inning. A pair of one-out walks to Axel Andueza and Roby Enriquez came in to score on a Danny Oriente double to left and a dropped fly ball in shallow right by Mueller off the bat of Ramses Malave.

The Canadians would score again in the fifth. A one-out walk by Trevor Schwecke was moved to second when Cardona took a pitch off the right ankle from Frias. The two runners advanced on a wild pitch before Mueller was walked to load the bases. Jiménez hit into a 6-4 fielder’s choice as the throw to first was off target and that allowed Schwecke to score.

Hillsboro would roar back a half-inning later, chasing Paulino from the game after a one-out single by Tim Tawa after falling behind 0-2 and a double by A.J. Vukovich off the glove of Tirotta at third. Abdiel Mendoza relieved Paulino and gave up a two-run single to Ryan Bliss. An Andueza walk and an Enrique single loaded the bases around a Bliss steal of second before a bloop single to shallow right field by Oriente brought home Bliss and Andueza. The next pitch saw Malave get Enriquez home with an infield single to short to tie the game at 7-7.

The C’s would move out in front in the top of the seventh when Trevor Schwecke doubled to the gap in right-center field against Hops lefty Andrew Saalfrank. Mueller would score Schwecke with a base hit up the middle.

The Hops would square things up in the ninth against C’s reliever Jol Concepcion. A four-pitch walk to Tawa, a base hit by Vukovich and a wild pitch put two men in scoring position. Concepion struck out Bliss and Enriquez around an intentional walk to Andueza but an unintentional free pass to Oriente scored Tawa with the tying run and the rain coming down.

Hillsboro would win it in the 10th against Concepion. Pinch-hitter Cam Coursey drew a walk with Malave already at second base. Pinch-hitter Caleb Roberts struck out swinging and Tawa was caught looking at strike three and that led to Tawa getting ejected by the home plate umpire Hector Cuellar. Vuckovich lifted a fly ball shy of the warning tracking near the right field corner but Mueller dropped the ball for his second error of the game and that allowed Malave to score the winning run.

The C’s first baserunner was Morris who was hit by a pitch off the right foot with two outs in the first inning.

Britton lifted a fly ball that nearly produced a collision in shallow left field but the shortstop Bliss made the catch to start the second inning. Schwecke did get aboard later that frame with a two-out walk but was stranded.

Jiménez was at second base after Morris’ RBI single in the third with one out but he would not get any further. A Tirotta two-out walk in the fourth was also left on while two more men were stranded at the corners in the fifth when Barger lined out to second.

Morris sent Frias out of the game with a leadoff walk in the sixth but that was the only C’s baserunner that inning. Tirotta fouled off to first on a 3-1 pitch from Saalfrank and Zach Britton got ahead of the count at 3-0 but hit into a fielder’s choice. Schneider struck out to end the inning.

Perez robbed Schneider of a hit with a diving catch on a sinking liner to left field in the fifth.

Barger got a break in the sixth inning when he popped up a 3-0 pitch but Andueza dropped the ball in foul territory behind the plate after colliding with Malave just on the third base side of home plate. Barger would draw a two-out walk but he and Mueller would be stranded when Morris struck out.

Tirotta got aboard with a leadoff walk in the eighth from lefty Kyle Backhus but Britton hit into a 4-6-3 double play.

Cardona doubled to right off Backhus just inside the line with one out in the ninth and stole third base but he was doubled off when Mueller lined into an inning-ending 6-5 double play with the infield drawn in.

The C’s were retired in order in the 10th by Jake Rice with Mueller as the placed runner at second. Jiménez struck out and Barger was robbed of a hit when Bliss made a running catch in shallow right-center field and managed to hold on to the ball after a charging Perez upended him. Perez was shaken up but he would remain in the game. Morris grounded out to second to leave Mueller right where he started.

Mueller had a three-hit night and a walk and Morris was aboard four times with two hits, a free pass and a hit by pitch. Schwecke had a triple and a pair of ball fours and Cardona had a hit, a walk and a plunk. Tirotta drew two bases on balls as eight Canadians got on base safely at least once. Vancouver had just three hits with 15 at-bats with runners in scoring position, leaving 11 men on base.

Paulino needed just seven pitches to get out of the first inning unscathed. He gave up a perfectly placed single to left to Enriquez that eluded a diving Barger and Tirotta in the 6-5 hole but Oriente grounded into a 4-6-3 double play that Morris completed by stretching at first.

Another double play helped Paulino end the fourth inning after allowing two runs. A soft liner from Curpa was caught by Morris at first and he doubled off a fallen Oriente at second for a 3-6 twin-killing.

Paulino gave up a leadoff double to Malave in the third that eluded a jumping Schwecke in left field. There was also a one-out walk to Perez but Paulino would get out of that jam by getting the next two hitters on fly balls on his last two pitches of the frame. He pitched 4-1/3 innings and gave up four runs (three earned) on five hits and three walks, punching out three.

After allowing both Paulino runners to score and three of his own in the fifth on four hits and a walk, Mendoza started a 1-4-3 double play to get out of the inning and would get through the sixth and seventh without any more baserunners. He got a nice play from Tirotta who made a nice pick of a ground ball at third offf the bat of Tawa.

Ryan Boyer made his Blue Jays organizational debut by pitching a shutout eighth inning. His only misstep was a two-out walk to Curpa. He sandwiched that walk with strikeouts of Malave and Perez, whiffing Malave with a 93-mile per hour fastball.

Concepion gave up two runs (one earned) on one hit and four walks for the blown save and the loss but he struck out five.

Boyer was assigned number 22 after all. It was reported he was going to take 32 instead of 22 but he will take over the number that was worn by lefty Sean Mellen, who was promoted to Double-A New Hampshire earlier this week.

Congratulations to 2018 Vancouver Canadians shortstop Vinny Capra for his call-up to Toronto. Posting a .344 OBP with 13 extra-base hits, 18 runs batted in and eight stolen bases for the C’s in 39 games before a promotion to La, Capra bypassed Dunedin for Double-A New Hampshire in 2019 but the 5-foot-8 right-handed hitter really made his mark last year when he boosted his batting average by 98 points with the Fisher Cats to .327 and slugged .548 for a .944 on-base plus slugging mark. The former Richmond Spider will wear number 44 with the Jays. You can learn more about Capra in this 2018 C’s Chat.

The Canadians will get another day to ruminate on the last couple of games as Friday’s game against the Hops has been rained out. The teams will play twice Saturday at Ron Tonkin Field beginning at 5:05 p.m. Chad Dallas and Adam Kloffenstein will get the starts for Vancouver.