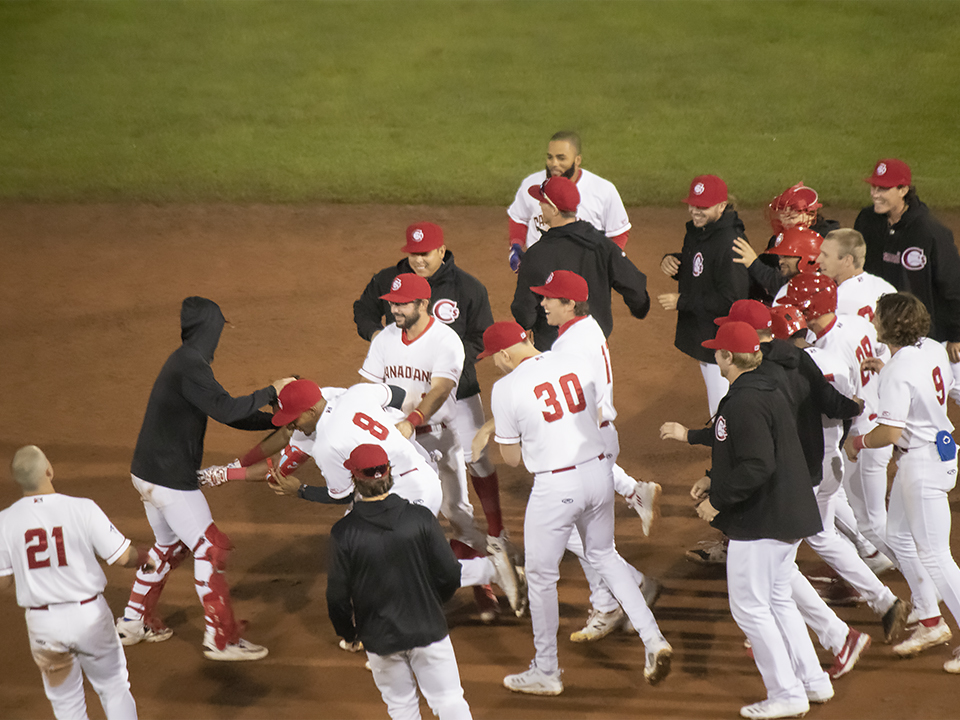 The Vancouver Canadians won a back-and-forth affair as they edged the Eugene Emeralds 9-8 in a steady drizzle at Nat Bailey Stadium Wednesday.

Vancouver would respond in the home half of the first. Steward Berroa and Davis Schneider were issued walks by Wil Jensen to open the inning and they would come in to score when Barger hit a three-run homer that left the yard in a hurry to right field to cut the Em’s lead to 4-3.

Eugene would get another long ball against Dallas to begin the third when Schmitt deposited a ball into the seating area of the C’s left field bullpen.

The C’s answered the Emeralds again a half-inning later and grabbed their first lead of the game. Schneider snuck one past a diving Simon Whiteman at second for a leadoff single to right. A one-out double to the left field fence got Schneider over to third. Schneider would come in to score when Santos was charged with a fielding error at short off the bat of Miguel Hiraldo. A Jensen wild pitch moved Schwecke and Hiraldo up 90 feet and they would come home on a two-out bloop single to right field by Mack Mueller that just eluded the reach of Whiteman.

Vancouver picked up another run in the seventh when Berroa earned a leadoff walk against Brett Standlee. Berroa stole second with one out and scored standing up on a two-out single by Schwecke to make it 7-5 Canadians.

The Emeralds would make sure the game would go past 8-1/2 innings by rallying in the ninth against Jol Concepcion. A one-out walk to Whiteman on a 3-2 pitch and a single by Santos to center came in to score on a Matos double to center that got over the head of Berroa. Matos was nailed at third in trying for the triple as Berroa, Barger and Schwecke teamed for the 8-6-5 putout.

With Patrick Bailey as the placed runner at second, Garrett Farmer took over on the mound for Vancouver. Schmitt’s single to right was skipped offf the glove of Mueller in right field and that allowed Bailey to score the go-ahead run.

Vancouver had Barger at second base to begin the bottom of the 10th and he would score the tying run on a pair of base hits to left by Schwecke and Hiraldo off Ty Weber. A sacrifice bunt by Andrés Sosa to the mound—just Vancouver’s second of the year—got Schwecke and Hiraldo over to third. Mueller was given an intentional walk to load the bases to bring up Hugo Cardona, who dropped down the team’s first bunt of the year last week in Tri-City. With the infield drawn in for the Emeralds, Cardona hit a grounder to short but Santos’ wide throw pulled Bone away from home plate and that allowed Schwecke to score the winning run.

Dallas struck out Rodolfo Bone to end the first inning as he struck out the side after the grand slam.

The second inning saw Hiraldo make a nice barehanded play at second to begin the second inning as he handled a looper over the head of Dallas to retire Najee Gaskins. A one-out walk to Whiteman and a fielding error by Barger who was trying to start a double play off the bat of Santos put two runners on but Dallas got Matos and Bishop to fly out to left and right.

The Emeralds got to C’s starter Chad Dallas early in the first inning. Ghordy Santos lined a single to center and Luis Matos lined a 0-2 pitch off the glove of a leaping Addison Barger at short for a single to left. Dallas struck out Hunter Bishop swinging on three pitches but a walk to Casey Schmitt loaded the bases. Dallas rung up Luis Toribio on strikes but Carter Aldrete launched a hanger on top of the home run porch in left to give Eugene a 4-0 lead.

Aldrete singled to left by getting one past a diving Barger at short with one out in the third but Barger started an inning-ending 6-4-3 double play by Bone to keep the Emeralds run total at one for the frame.

Dallas surrendered a leadoff single to right by Gaskins who was forced out on a 6-4 fielder’s choice by Whiteman. Santos then doubled to the wall in right field but Mueller started a 9-6-2 double play as Barger made the throw to Anthony Morales to cut down Whiteman at the plate. Sosa then dug out a throw by Barger on a grounder by Matos for out number three.

There was more traffic on the bases for Dallas in the fifth when Bishop was walked to begin the frame. Bishop would steal second base but Dallas retired the next three hitters in a row as he finished it off by striking out Toribio and Aldrete swinging.

It was five runs allowed for Dallas in five innings on seven hits and three walks but he struck out five and got six groundball outs in his 85-pitch outing.

Sean Wymer pitched at Nat Bailey Stadium for the first time since his rookie season of 2018. The Texas Christian hurler struck out Bone and Whiteman in the sixth and got Santos to ground out to strand a Gaskins one-out walk. The last time Wymer was at the Nat was against Boise August 27 when he struck out seven batters over three innings.

Ryan Boyer pitched for the first time since May 18 against Tri-City as he was sidelined with an oblique injury. The righthander from the University of Pittsburgh-Bradford had a 1-2-3 seventh by capping it off with swinging strikeouts by Bishop and Schmitt. Bishop was ejected as he felt he held up on his swing. He was replaced by Aldrete in right field and Bailey took over for Aldrete at first. Boyer has yet to give up a run over six appearances spanning seven innings with the C’s.

Concepcion had a 1-2-3 eighth but gave up two runs on two hits and a walk with two strikeouts over two innings. His strikeouts ended both innings as he got Bone and Bailey swinging.

Farmer got the win as he was charged with an unearned run on a hit and.a walk in the 10th. After Schmitt’s RBI single that resulted in an extra base, a Toribio fly ball to center pushed Schmitt to third. Farmer intentionally walked Aldrete and the strategy worked as Bone hit into an inning-ending 6-3 double play.

Schwecke reached base on a throwing error by Schmidt at third after Barger’s first inning home run but he was left on base. He worked around a one-out Gaskins walk and a stolen base by striking out Whiteman and getting Santos to ground out to first.

Barger almost had his second home run of the game as he tried to sneak one an opposite field shot down the left field line but it landed foul. Later in the third, Mueller thought he had a home run to left but drifted foul. Mueller made like Carlton Fisk in the 1975 World Series as he skipped down the first base line. The next pitch resulted in Mueller’s bloop two-run single. The former Baylor Bear would steal second but he was stranded.

Barger was hit by a pitch from Nick Morreale after a 3-0 count to open up the fifth. The C’s shortstop moved up to second with out when Hiraldo was thrown out by Morreale. The Emeralds pitcher was hit in the foot before shovelling the ball with his glove to first to retire Hiraldo. Barger would remain stranded at second.

Sosa was walked by Standlee to start the eighth and stole his second base of the year but the C”s could not get the ball out of the infield. Cardona popped one up to the second and it was juggled by Whiteman before he secured the rawhide. That was the second out of the inning as Standlee retired the next three hitters in a row.

Schwecke led the hit parade by going 3-for-5 with a double. Schneider reached. base twice with a single and a walk. Mueller had a hit, was hit by a pitch, stole his third base of the year and had an assist in right field. Berroa walked twice, stole his 13th base of the year and earned a helper in center. Sosa walked and swiped his second bag. Hiraldo had the other base knock. The C’s were 5-for-14 in the RISP department and left eight men aboard.

Barger’s first inning blast—his 11th of the year—left the yard at 105 miles per hour according to C’s play-by-play man Tyler Zickel who passed along that information from the club’s technical assistant A.J. Arias.

It’s Throwback Thursday and Dog Day of Summer at The Nat. Yosver Zulueta will be on the bump for Vancouver and is set to throw the first pitch at 7:05 p.m. Ryan Murphy will get the ball for Eugene. The game is on CanadiansBaseball.com and MiLB.TV.

Vancouver’s starter for Sunday’s series finale has been announced. Alejandro Melean will get the call on Father’s Day in a 1:05 p.m. first pitch. Lefties Ricky Tiedemann and Naswell Paulino are scheduled to start in Friday’s doubleheader beginning at 1:05 p.m. Fellow southpaw Jimmy Robbins will make his Nat Bailey Stadium debut on Saturday at 7:05 p.m.