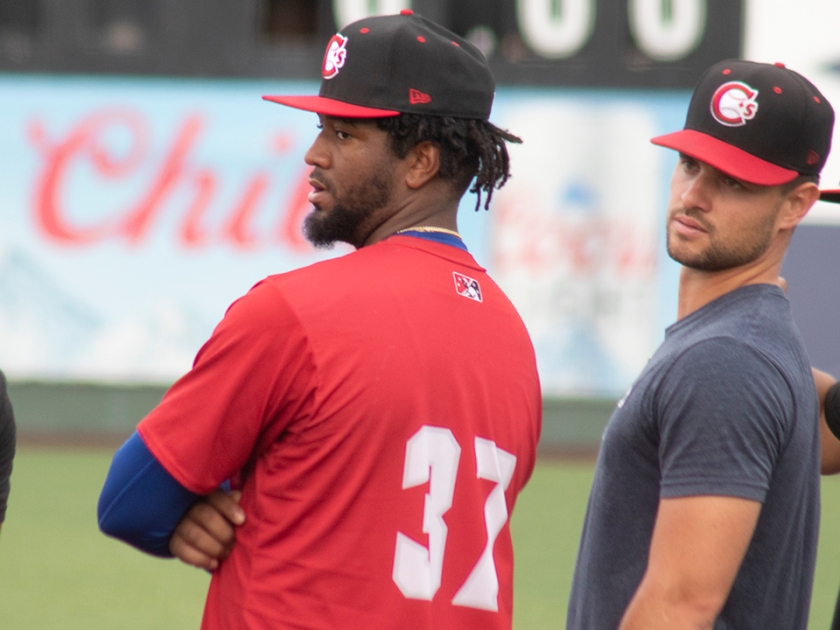 The Vancouver Canadians have guaranteed a series victory by defeating the Spokane Indians 7-5 at Avista Stadium Friday.

The C’s jumped on Andrew Quezada for two runs in the first inning. Damiano Palmegiani singled on the first pitch he saw and scored on a Rainer Nuñez home run to left-center field to put Vancouver in front 2-0.

A two-out rally in the second provided Vancouver with another run. Jommer Hernandez walked, advanced to second on a Michael Turconi single to center and scored on a Dasan Brown base hit up the middle.

Spokane solved Trenton Wallace in the third inning when Hunter Goodman connected on a 0-2 pitch for a home run to left center field for a two-out solo shot.

In the sixth, Spokane made it a one-run game against Matt Svanson. A one-out double to left by Ronaiker Palma and a single to right by Bladimir Restituyo put runners in scoring position. Pinch-hitter Robby Martin grounded out to second to plate Palma.

The Canadians would expand their lead in the seventh against Will Tribucher. A one-out single to right by Turconi was followed by a Brown bunt single to first and Turconi would come home on a Palmegiani double to center. Nuñez was intentionally walked to load the bases and that moved backfired as P.K. Morris singled to right to drive in Brown and Palmegiani to give the C’s a 6-2 lead. Anderson Bido replaced Tribucher but allowed an inherited runner to score when Nic Kent made a fielding error at third on a grounder by Alex De Jesus. Nuñez would come in to score Vancouver’s seventh run.

The home side tried to storm back in the ninth against Sam Ryan. Yorvis Torrealba reached base on a one-out throwing error by De Jesus at third and he came home when Eddy Diaz homered to right on the first pitch he saw. A two-out solo shot to right by Goodman made it a two-run game. Connor Cooke was called in to replace Ryan and he retired Mateo Gil on a fly ball to right to clinch Vancouver’s fourth win of the series.

The Canadians were limited to one run in the second when Palmegiani struck out with runners at the corners after Brown’s RBI single.

Garrett Spain singled to left to start the fourth inning and stole second base. Turconi drew a walk but Brown flied out to center for the third out.

Palmegiani worked the count to ball four to begin the fifth but Nuñez hit into a 6-4-3 double play.

Brown blooped a single to center against Raymellis Rosa with two outs in the eighth and Morris lined one back up the middle against Shelby Lackey in the ninth for the final two Vancouver hits.

The hit leader was Brown with three while Palmegiani, Morris and Turconi all had two with Palmegiani and Turconi also hearing ball four once. Nuñez made it aboard twice with a walk to go along with his fourth homer in a C’s uniform. Spain had a hit and Hernandez drew a walk. The runners in scoring position stat reads 3-for-9 for Vancouver with seven men left on base.

Wallace worked around two first inning walks with one out by striking out Simpson and getting Gil to fly out to center. Another one-out walk to Restituyo and a stolen base was stranded by Wallace as he struck out Palma swinging and Boone looking before getting Nic Kent to fly out to left. Simpson singled to right after Goodman’s third inning homer before Wallace struck out Gil swinging.

A Palma leadoff single to center and a two-out infield single to third by Kent were kept from scoring in the fourth inning when Torrealba popped out to third. The fifth inning was Wallace’s best as he retired the side in order, striking out Simpson swinging on a 3-2 pitch to hand the ball to the bullpen.

Svanson retired Kent on a groundout to second to strand Restituyo at second to end the sixth. He also had to contend with a two-out single to short by Goodman and a base hit to center by Simpson but Gil popped up to short for the third out. The eighth inning was set down in order by Svanson before giving the ball up to Ryan for the nervous ninth.

The winning pitcher was Wallace as he earned his first W for Vancouver with five innings of one-run ball on four hits and three walks. He struck out five and threw 51 of his 88 pitches for strikes. Svanson surrendered a run on four hits and struck out one over three innings. Ryan was roughed up for two home runs and three runs overall on two hits but two of the runs were unearned. Cooke got the only batter he faced to collect his eighth save.

The C’s are 4-1/2 games ahead of Spokane for second place overall and the final playoff spot in the Northwest League with a 65-56 record. The magic number for Vancouver is now down to four, meaning any combination of Vancouver wins and Spokane losses totalling four will put the C’s in the Northwest League final against Eugene. The Emeralds still hold a one-game lead over the 35-23 Canadians for top spot in the second half.

The sixth game of this seven-game set goes Saturday at 7:05 p.m. It will be Case Williams on the mound for Spokane. Dahian Santos will be on the hill for Vancouver. Tyler Zickel will have the play-by-play on CanadiansBaseball.com.