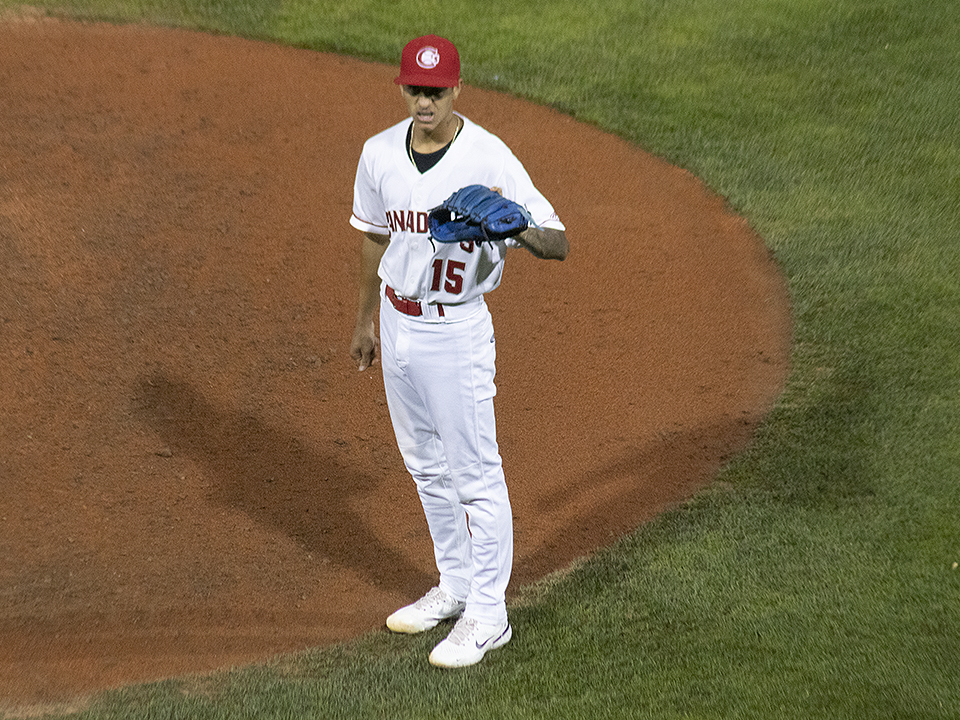 The Vancouver Canadians dropped a 4-2 decision to the Eugene Emeralds at Nat Bailey Stadium Saturday night.

Grant McCray gave Eugene the lead one batter in as he took Canadians starter Dahian Santos to straightaway center field in the top of the first inning.

The Emeralds added to their lead in the third. Hayden Cantrelle led off with a double to right and McCray got aboard with a walk. Santos struck out Luis Matos and Marco Luciano swinging but an infield single to short by Hunter Bishop scored Cantrelle to make it 2-0 Eugene. Michael Turconi called out the outfielders to try to make the catch but the ball fell in behind him instead, allowing the run to score.

The Canadians fought back in the bottom of the third against Emeralds starter Mason Black. Garrett Spain walked and stole second base with one out. Andrés Sosa kept the inning going with a two-out free pass. P.K. Morris singled to right to drive in Spain and Gabby Martinez punched one into center to plate Sosa and tie the game at 2-2.

Eugene retook the lead in the ninth against Garrett Farmer. The trouble started with a leadoff walk to Jimmy Glowenke and an Andy Thomas single to center. Damon Dues advanced both runners with a sacrifice bunt to third. Cantrelle then hit a sharp ground ball that handcuffed Morris at first base amd that error brought in Glowenke with the go-ahead run. McCray grounded out to second to cash in Thomas.

The Emeralds ran themselves out of a bigger first inning. Matos singled past a diving Michael Turconi at short to center field and Luciano walked on a 3-2 pitch but Santos picked off Matos trying to steal third on a 1-5-6 play. Santos would then strike out Bishop and Toribio swinging to end the inning.

The second inning went a lot smoother for Santos as he ended a 1-2-3 frame with punchouts of Thomas swinging and Dues looking.

The Emeralds were looking to build a bigger lead in the third after Bishop’s infield RBI single but Luis Toribio was called out for batter interference when Bishop tried to steal second.

Morris made a couple of nice plays at first to begin the fourth. He stretched to stay on the bag on a throw from Alex De Jesus at third to retire Gloweke and did so again on a throw from Glenn Santiago at second to get Thomas. Dues singled to left with two outs but Santos struck out Cantrelle looking to end his outing.

Naswell Paulino came in for Santos in the fifth and struck out Luciano swinging to end that frame. He also struck out Toribio swinging as part of another perfect inning in the sixth.

Devereaux Harrison also set down the side in order with three groundouts in the seventh but Dues appeared to beat out a grounder to short with one out. Harrison surrendered a leadoff single to center by McCray in the eighth. Matos then hit into a 3-6 fielder’s choice to force out McCray but Turconi’s throw ended up in the Emeralds first base dugout. Luciano reached on an infield single to short but was forced out on a Bishop 3-6 fielder’s choice. With runners on the corners, Harrison struck out Toribio for the third out.

Santos surrendered two runs on five hits and two walks but struck out seven in four innings and recorded three of his four outs in play on the ground. Paulino punched out two batters in two perfect frames and Harrison worked around two hits over two scoreless innings with one punchout. Farmer took his first loss of the season by allowing two runs (one earned) on a hit and a walk in the ninth. He falls to 5-1.

Sosa drew a one-out walk in the first inning but was forced out on a 4-6 fielder’s choice. The inning would end on a Martinez strikeout.

Spain reached base on an infield single to the mound that Black could not handle with two outs in the fourth but Santiago lined out to left.

A two-out walk by Morris from Black in the fifth and another two-out free pass by De Jesus by Hunter Dula were left on base when Martinez popped out to short and Spain flew out to right respectively.

A scary moment took place with one out in the seventh when Dula drilled Dasan Brown in the batting helmet. I had to check that the opposition was the Eugene Emeralds and not the Hillsboro Hops. Brown was flat on his back for a bit but managed to remain in the game. He would be forced out on a 6-4-3 double play by Sosa.

Vancouver’s best chance to take the lead came in the eighth against Mat Olsen. Martinez singled to left with one out but was caught in no-man’s land when a pop up from Hiraldo fell in front of Glowenke but the Eugene third baseman was able to force out Martinez at second on a 5-4 play. Hiraldo would steal second and Turconi drew a walk. They moved up 90 feet when Olsen’s pickoff attempt at second went into center field but De Jesus struck out swinging on a 3-2 pitch to end the rally.

In the ninth, Santiago walked with one out against Tyler Myrick and Brown had a 3-0 count but fouled out to first. Sosa then flew out to center to end the game.

Martinez had half of Vancouver’s four hits with Morris and Spain getting the others. Morris and Spain also heard ball four once. Sosa drew two walks while Turconi, De Jesus and Santiago had one apiece. Spain stole his 10th base of the year and Hiraldo swiped his 29th. The C’s left nine men on base after going 2-for-5 with runners in scoring position.

The Canadians handed out their year-end player awards at the conclusion of Saturday’s game.

The final regular season home game for the Canadians is set for Sunday. Nathanael Pérez Lopez will be on the mound focr Vancouver. Jake Wong will start for Hillsboro. Tyler Zickel will have the call on CanadiansBaseball.com and MiLB.TV at 1:05 p.m.