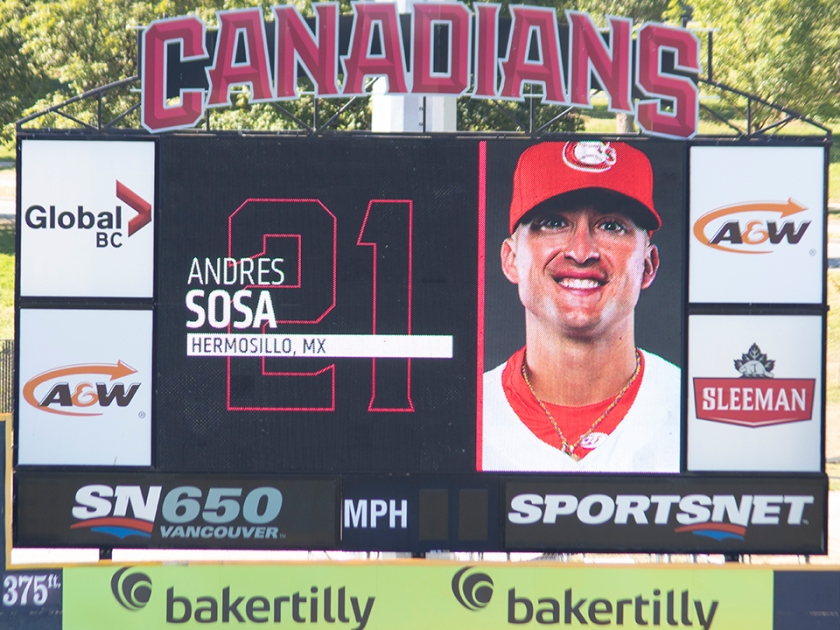 The Vancouver Canadians were edged by the Eugene Emeralds 6-5 in Game 2 of the Northwest League Championship Series at P.K. Park Tuesday.

Vancouver’s final runs came in the seventh against Trevor McDonald. A one-out walk by Garrett Spain was driven home by a Dasan Brown two-run homer to left-center field.

Eugene scored again in the first inning when a Grant McCray leadoff walk and stolen base against C’s starter Michael Dominguez were advanced by a Luis Matos fly ball to right and a Hunter Bishop infield single to third.

Vancouver pulled ahead in the second inning against Nick Swiney. Gabby Martinez led off with a single to right and Michael Turconi singled to center. Alex De Jesus doubled to left to score Martinez.

Garrett Spain added a sacrifice fly to center to score Turconi with the C’s second run.

A home run to center by Andrés Sosa with one out in the third gave the Canadians a 3-1 advantage.

Eugene surged ahead in the sixth against Vancouver reliever Matt Svanson. Jimmy Glowenke started the inning with a single to center and went to third on a Luis Toribio double to left. Hayden Cantrelle walked to load the bases with one out. Despite strikeouts of Damon Dues looking and McCray swinging and being one strike away from getting out of the inning, Svanson surrendered a game-tying two-run single to Matos on a 1-2 pitch. The next pitch resulted in a three-run homer by Marco Luciano to left-center to put the Emeralds up 6-3.

Vancouver closed to within a run in the seventh when Garrett Spain walked and Dasan Brown homered to left-center for a two-run shot off Trevor McDonald.

P.K. Morris was the first baserunner for Vancouver when he was hit by a pitch with two outs in the first.

The fifth inning saw Spain single on a pop up to left but he was forced out on a Brown 4-6 fielder’s choice. Brown stole second base before Damiano Palmegiani and Morris walked to load the bases but Nuñez grounded into a 4-3 double play.

Sosa had a one-out walk in the sixth inning but was thrown out trying to steal second by McDonald for a 1-4 caught stealing for the third out.

Sosa drew a two-out base on balls in the eighth against McDonald as did Turconi. Sosa wound up at third after two wild pitches and Turconi stole second but Tyler Myrick got out of the inning by getting De Jesus to fly out to right.

Spain and Brown got aboard on infield singles to the mound to start the ninth against Juan Sanchez with Brown bunting his way on. Sanchez would strike out Palmegiani, Morris and Nuñez all swinging to end the game.

Brown and Spain led Vancouver with two hits apiece while Sosa walked twice to go along with his homer. Turconi singled and walked and Gabby Martinez had a hit. Morris was on base twice with a walk and was hit by a pitch. Palmegiani heard ball four once.

Dominguez stranded Bishop’s RBI single in the first inning after Bishop stole second base by getting Glowenke to ground out to second.

In the second inning, Dominguez loaded the bases with one out. Toribio bunted for a single to the mound and Dues drew a walk with nobody out before McCray got a base hit to left. Dominguez got out of it by striking out Hayden Cantrelle swinging, getting Matos to pop up to Sosa in foul territory behind the plate and striking out Luciano swinging.

The third inning saw Dominguez strike out the side by getting Bishop and Andy Thomas swinging and Glowenke looking.

Two-out walks to Cantrelle and Bishop in the fourth and fifth were stranded by Dominguez as he struck out Dues in the fourth before K’ing the side by getting Matos looking and Luciano and Thomas swinging.

Naswell Paulino took over for Svanson in the sixth and got Thomas to fly out to left to strand a Bishop double to center. In the seventh, Paulino walked Glowenke to start the frame but got the next two hitters that included a whiff of Toribio. Troy Watson came in and got Cantrelle to ground out to second to end the eighth. A strikeout of McCray was how Watson started the ninth but got into trouble when Matos singled to right with one out and Bishop walked with two but Thomas flew out to left to strand the runners.

Dominguez gave up one run on three hits and five walks and struck out nine over five innings. Svanson took the loss with five runs surrendered on five hits and a walk while striking out two. Paulino stranded a runner and had a 1-1 strikeout/walk total over one scoreless frame. Watson also stranded a runner and worked around a hit and a walk while whiffing one in 1-1/3 innings.

The series shifts to Vancouver for Game 3 Friday at Nat Bailey Stadium. First pitch is at 7:05 p.m. You can catch the game on CanadiansBaseball.com and MiLB.TV. Tyler Zickel will have the play-by-play.