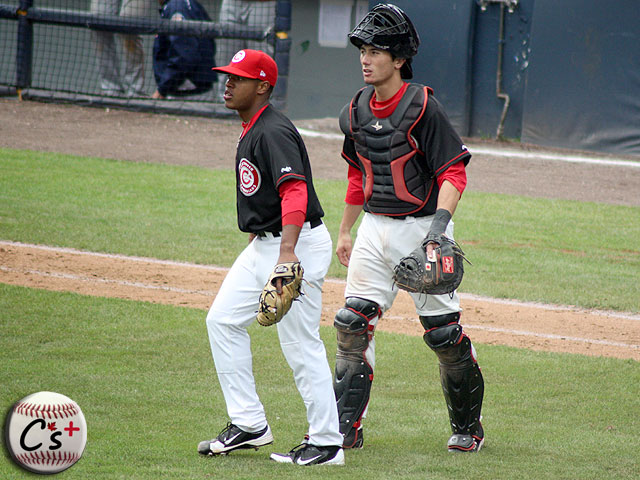 The Vancouver Canadians had a battery of Tuckers during the 2012 campaign. When the two played catch together in the same game, good things tended to happen as they played a role in helping the C’s repeat as back-to-back Northwest League champions.

The Tucker on the mound was Tucker Donahue, a 6-foot-2 right-handed reliever who was selected in the fourth round of the 2012 draft by the Toronto Blue Jays.  The Stetson University product was armed with a fastball that reportedly hit 97 miles per hour.

The Tucker behind the plate was Tucker Frawley, a 6-foot-1 catcher taken four rounds later by the Jays from Coastal Carolina University. His given name is Harrison Tucker Frawley according to his bio page but he decided to go by Tucker instead. Frawley was named first team All-Big South catcher and was one of 12 semifinalists for the Johnny Bench Award as college baseball’s top backstop.

Both players received just $5,000 signing bonuses as the Blue Jays and the 29 other major league teams had to find ways to deal with new bonus pool amounts that were assigned to each team for the first 10 rounds of the draft. In order to meet the signing demands of higher-profile players such as pitchers Marcus Stroman, Matt Smoral and Chase De Jong, infielder Mitch Nay and outfielder Anthony Alford, the Jays decided to select senior college players with no leverage as they were unable to go back into the draft. Donahue was drafted the year before by the Texas Rangers in the 38th round but he elected to go back to Stetson for his senior season.

Both Donahue and Frawley signed with the Jays on June 11, 2012 and reported to Vancouver four days later. Donahue was the first to see action as he made an appearance in the team’s second game of the year in Spokane. The good news was the C’s won that game 11-4. The bad news was Donahue gave up all four runs without getting an out. The Donahue-Frawley combo would make its collective debut two days later in the Canadians home opener June 20. Frawley went 2-for-3 with a walk and a run scored while Donahue pitched two innings of one-run ball on two hits but the C’s fell to Tri-City 5-3.

The Tucker Duo’s next appearance resulted in Donahue’s first professional win June 24 as he blanked the Dust Devils over two innings in an extra-innings walk-off victory over the Tri-City Dust Devils. Frawley was 0-for-2 but he did draw a pair of walks. The two would not appear in the same game again until July 20 and that resulted in another first for Donahue. The Coral Springs, Florida native earned his first professional save as he struck out three over two shutout frames to preserve a 4-0 win at home against the Spokane Indians. Frawley contributed a base on balls in his four plate appearances.

The C’s rolled the dice again with the Two Tuckers three days later and it resulted in Donahue’s second win of the year with 1-2/3 scoreless frames in a 12-7 triumph over Spokane. Frawley chipped in with a base hit, a run batted in and a run scored.

Frawley enjoyed more success when the two appeared again in the same game July 27 in Everett. The former Chanticleer had an RBI single and scored a run and Donahue earned a hold to help the C’s get by the AquaSox 4-3. The Donahue-Frawley tandem’s winning streak continued against the Eugene Emeralds in Oregon August 4 as Donahue stranded a runner for another hold by pitching one-third of a scoreless inning while Frawley stole a base and scored a run in an 8-5 win. The good times for the two ended when Donahue was saddled with the loss and Frawley went 0-for-3 three days later in Tri-City.

The duo bounced back August 10 in Tri-City when Donahue spun a scoreless frame and Frawley went 1-for-5 with an RBI as the C’s pounded the Dust Devils 10-4. One week later, Donahue got his third win of the year with Frawley donning the tools of ignorance again in a 14-3 beatdown of Everett at Nat Bailey Stadium. Donahue was nicked for an unearned run in his one-inning stint but Frawley went 2-for-4 with a run scored and two RBI.

The two’s winning ways continued August 20 on the road against the Salem-Keizer Volcanoes as the C’s came away with a 4-1 victory in which Frawley had a base hit. That would be the last time the two Tuckers worked as a battery on the mound. The two would appear in the memorable Game 1 victory of the Northwest League final against the Boise Hawks but not as a tandem as Frawley entered the game after Donahue was replaced.

It was in the post-season that Frawley grabbed center stage. He recorded a hit in all five of Vancouver’s playoff games and batted. 500 with a home run and five RBI. He belted a two-run homer in the third and deciding game in Boise to help the C’s outslug the Hawks 12-9 to keep the Bob Freitas trophy north of the border for another year.

An article by C’s broadcaster Rob Fai states the convincing case that Frawley was the C’s MVP in the playoffs.

What didn’t go into the box score was Frawley’s defensive moments that included getting slammed at home plate, not once, but twice as Boise tried to produce runs – both Hawks runners out at home as Frawley wouldn’t let the ball drop loose despite taking two significant blows.

Next to Frawley’s playoff exploits, Frawley’s other big accomplishment was being behind the plate for Marcus Stroman‘s first professional victory as the C’s defeated Spokane 5-2 at Nat Bailey Stadium July 22.

Despite ending 2012 in a blaze of glory, that turned out to be it for Frawley and his playing career. Battling Dan Klein, Derrick Chung and Santiago Nessy for playing time behind the dish, Frawley’s playing time was inconsistent as he finished with a .185/.280/.185 batting line with eight RBI in 81 at-bats. At last word, Frawley was a student assistant with his alma mater Coastal Carolina Chanticleers.

Donahue – who was 3-2 with a 5.26 ERA and a save for Vancouver – reported to Lansing in 2013 but struggled with a 3-3 mark and a 6.09 ERA. He spent most of August on the disabled list before returning late in the year but he gave up runs in his last three appearances of the year. Donahue would be released by the Blue Jays the following April. His Twitter account @TuckeRyan says he is working as an investment analyst in Miami.

When analyzing what it takes to be a champion, every little bit helps and the efforts of Tuckers Donahue and Frawley helped play a part in keeping the 2012 Vancouver Canadians on top of the Northwest League mountain for a second straight season.