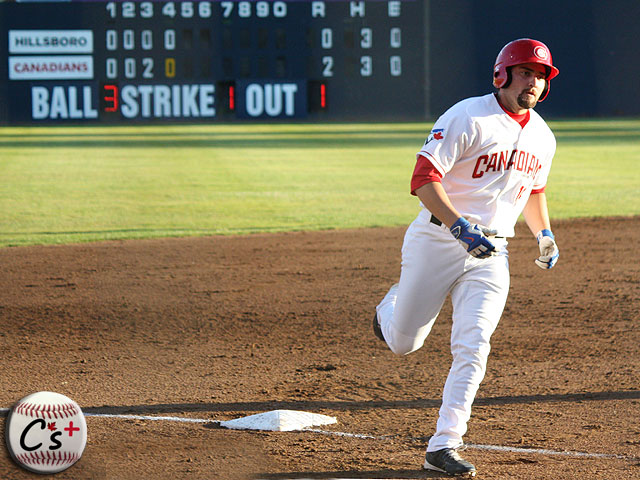 A number of former Vancouver Canadians have been released by the Toronto Blue Jays during the off-season. Five of them were talked about in this story so here’s a look at three others who were let go.

First baseman Gabriel Clark was the first to be let go and it was during the 2016 season. The former Oregon State Beaver was selected in the 26th round of the 2015 draft by the Blue Jays after posting an .841 on-base-plus slugging percentage in his junior season. Before arriving in Vancouver, Clark spent the summer of 2014 with the Victoria HarbourCats of the West Coast Collegiate League, putting up a batting line of .291/.372/.494 with eight doubles, eight home runs and 31 runs batted in and stole five bases without getting caught.

Clark came back to Victoria in 2015 but only played in two games, going 1-for-8 but that one was a home run. The 6-foot-tall right-handed hitter began his pro career with the Bluefield Blue Jays later that year and homered in his first game in just his second at-bat July 9. He had seven multi-hit games, including three-hit efforts on July 24 and August 13. After July 24, his batting average stood at .302 but a rough August resulted in a final slash line of .219/.318/.414 with seven doubles, six homers and 22 RBI.

Clark returned to British Columbia in 2016 as part of the C’s Opening Day roster. He contributed to their first victory of the season with a walk, a run and a two-run double in the ninth to help Vancouver defeat the Spokane Indians June 17. Clark recorded another hit the next night but then fell into an 0-for-13 skid which he snapped at home with a single along with a hit by pitch and two runs scored against the Hillsboro Hops June 26. The next night against the Hops, Clark connected for his first home run in support of Justin Maese‘s first Northwest League victory.

His last contribution to the C’s came June 29 on the road against the Tri-City Dust Devils when his RBI single prevented a Vancouver shutout. An 0-for-12 skid to drop his slash line to .132/.233/.237 led to his eventual release July 12. Clark told Victoria Harbour Cats Blog at the time of his signing with the Blue Jays that he agreed to join them only if the rest of his schooling was paid for. As it turns out, that was a wise decision by the 22 year-old as he has not caught on with another club at this point.

Catcher Josh Reavis and outfielder Juan Tejada were the first to be released by Toronto after the season as the bad news was made official last November 18. Both players had spent time with the C’s in 2015 and 2016.

Reavis was drafted by the Jays in the 38th round of 2015 after completing a four-year career with the Radford University Highlanders in Virginia where he posted an .814 OPS in his senior year. He remained in the Virginia area when he reported to Bluefield to start his pro career. His first action came June 24 when he entered the game as a defensive replacement. He got his first hit in just his second at-bat the following night and that was the start of a four-game hitting streak. A 1-for-9 slump dropped his batting average to .238 with the Bluef-Jays but he still earned a promotion to Vancouver near the end of July.

Reavis doubled in his first at-bat with the C’s in Everett July 28 and singled in his first two at-bats in his Nat Bailey Stadium debut August 7, driving in the first run of the game in a 5-1 win over Spokane. The La Jolla, California native set a career high in hits by going 3-for-7 in Hillsboro August 15. He had an eight-game on-base streak and reached base in 10 of the 12 games he had a plate appearance, finishing with a .302/.375/.349 batting line.

Reavis returned to Vancouver for 2016 and reached base twice on a hit by pitch and a walk in Spokane June 19. A 0-for-14 skid would follow and a 1-for-23 stretch dropped his average to .040 in late July. He had a better August with hits in his first three games of the month and belted his first professional home run at the Nat against Boise August 24. His final game with the C’s was in Tri-City September 5 and he picked up a single and a walk in his final two plate appearances for a final batting line of .161/.310/.250. As of now, the 25 year-old Reavis has not joined another team.

Juan Tejada was signed by the Blue Jays as a free agent in July of 2011 from the Dominican Republic. The native of Bani spent two years with the Dominican Summer League Blue Jays where he batted .236 and .196 but stole a combined 36 bases and showed a decent eye at the plate with a walk rate of over 10 percent. He made his stateside debut in 2014 and bumped his isolated slugging percentage by 100 points with a .420 slugging percentage thanks to five home runs but he had trouble making contact by striking out nearly 32 percent of the time.

Tejada began 2015 in Vancouver and scored three times – including the first run of the season – with a hit and a walk in Salem-Keizer in the C’s season opener June 18. He recorded hits in four of his six games on the road but he failed to get a hit in three home games before being sent down to Bluefield at the end of the month. The right-handed hitting Tejada tapped into some power in the Appalachian League with six home runs and a .434 slugging percentage but he whiffed nearly 29 percent of the time.

2016 saw Tejada return to Vancouver and overcome a 0-for-9 start to the year with a 3-for-4 afternoon with a double and a stolen base in a home victory against Hillsboro June 25. He played one more game with Vancouver and despite a .211 batting average to start the Northwest League season, he was promoted to Lansing. Things didn’t get any better for Tejada in Michigan as he scuffled to a .154 batting average with one home run. He was sent back to the C’s to close out the 2016 campaign and went 2-for-2 with two doubles and a walk in his return to the club in a August 27 game in Everett. He then went deep for his first Northwest League homer the next day against the AquaSox. Tejada had at least one hit in five of his seven games upon his return, including a two-hit effort that included a triple at the Nat August 31. He ended the year on a sour note by going 0-for-5 in Tri-City September 5, sinking his batting line to .239/.300/.457. As of now, the 23 year-old Tejada has not signed with another club.

Best wishes to these three players in their future endeavors.