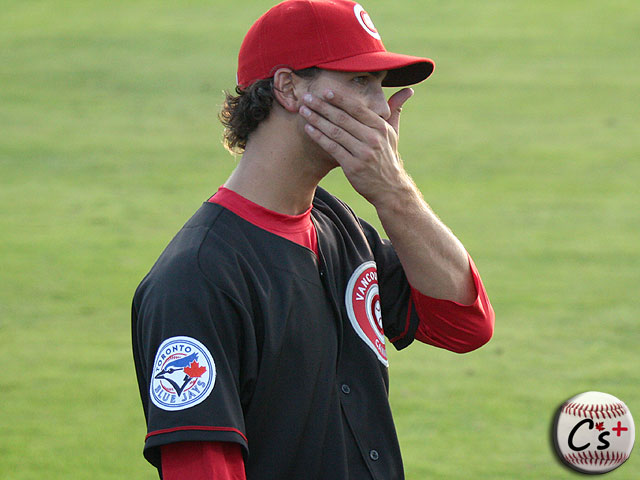 The major league debut of 2013 Vancouver Canadians righthander Chase De Jong was anything but uneventful. He got to pitch in Houston for the Seattle Mariners in the bottom of the 13th inning at Minute Maid Park with a chance to earn his first major league save. The Mariners managed to break a 2-2 tie in the top half of the 13th by drawing four consecutive walks with Kyle Seager‘s free pass bringing in Mitch Haniger‘s. The M’s could not break the game wide open as former Toronto Blue Jay Danny Valencia flied out to shallow center before Mike Zunino and Jarrod Dyson went down swinging to leave the bases loaded.

De Jong was the last man standing in the bullpen and it was up to him to get three outs and preserve Seattle’s first win of the season. His first pitch was a called strike at 89 miles per hour and his second resulted in a 80 MPH curveball hit weakly back to De Jong who retired Yulieski Gourriel, brother of Jays prospect Lourdes Gourriel Jr., on a 1-3 putout. He used his repertoire of a slider, four-seam fastball, a curve and a cutter ranging from 79-90 MPH against Evan Gattis but none of the four pitches resulted in a strike. De Jong would retire Josh Reddick on a foul popup to second baseman Robinson Cano for the second out. He got ahead of Norichika Aoki at a ball and two strikes but Aoki’s well placed ground ball single to left kept the Astros alive. George Springer, whose two-run double in the seventh against former Everett AquaSox pitcher Dan Altavilla tied the game at 2-2, came up to the plate and worked the count full to 3-2. De Jong had tried to get Springer to swing at a curveball in the dirt but Springer laid off. De Jong tried again with the Uncle Charlie but he hung it as Springer pulled the ball that barely cleared the wall in left field for a three-run home run to give the Astros a come-from-behind 5-3 victory.

“I thought Chase handled the situation about as well as he could. It doesn’t get any tougher, making your Major League debut in that spot.”

It was a disappointing ending but De Jong’s reaction suggests he’ll be just fine.

“Yeah, but I just pitched in the big leagues and that’s still pretty cool.”