Andrew Guillotte‘s batting average has climbed over 100 points since mid-April with Dunedin.

The Dunedin Blue Jays lead the Florida State League in batting average, on-base percentage and slugging percentage and three former Vancouver Canadians have helped spearhead the D-Jay offence. Outfielders Andrew Guillotte and Lane Thomas and second baseman Cavan Biggio have helped Dunedin get out to a 13-11 start to keep them within striking distance of the 16-8 Clearwater Threshers for first place in the North Division.

Guillotte has a 12-game hitting streak on the go as he seen his batting average climb from .211 in mid-April to .326 to go along with a .397 OBP and a .477 slugging mark. The former McNeese State Cowboy has also stolen seven bases in eight attempts to put him among the league’s top five.

The Blue Jays 32nd round pick of 2015 recorded a career-high four hits to help Dunedin defeat the St. Lucie Mets April 19. That game saw him hit his Florida State League first home run of the season and finish a triple short of the cycle. He homered again four days later to help the D-Jays rout the Fort Myers Miracle. The 5-foot-8 right-handed hitter was on base five times with a single, two doubles and two walks in another win over Fort Myers April 29.

The 24 year-old Guillotte has drawn a walk nearly 10 percent of the time while keeping a tolerable strikeout rate of almost 13 percent. He has seen time at second base and shortstop in addition to all three outfielder spots, committing just two errors so far. 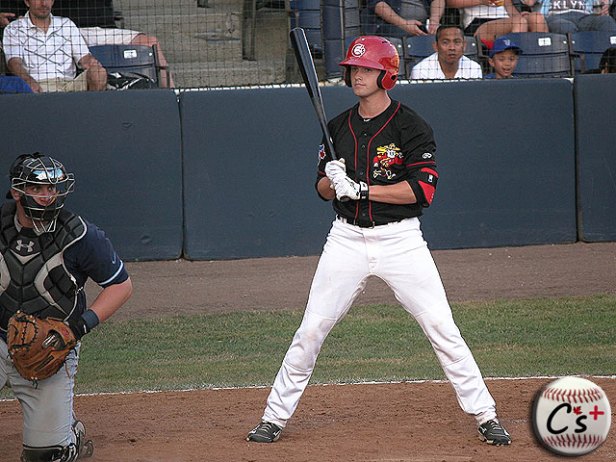 Thomas seems to enjoy being away from the infield as he has been remained in the outfield in 2017. He made a combined 32 errors at third base and second base over his first two pro seasons, 13 at the keystone with Vancouver, before shifting to the outfield where he spent most of 2016. He has spent most of this season in center field in Dunedin and it seems to agree with him.

The Jays 5th round pick of 2014 has a slash line of .289/.375/.518 with the latter mark placing him ninth in the Florida State League. A huge part of that slugging mark is a league-leading five triples to go along with three doubles and two home runs. His 14 runs batted in is just two back of Max Pentecost for the team lead. The 6-foot-1 right-handed hitter’s best game of the season came April 25 when he was a home run short of the cycle in Dunedin’s win over the Charlotte Stone Crabs.

The 21 year-old Thomas from Knoxville, Tennessee is trying to cut down on the strikeouts as he has seen his bats end with strike three nearly 22 percent of the time. His walk rate is close to 11.5 percent.

Another former Vancouver Canadian contributing to the Dunedin cause is 2016 second baseman Cavan Biggio. The Houston native connected for his first pro home run in an April 28 victory over Fort Myers. The 22 year-old is hitting .286 with an on-base mark of .357. Even though he has a whiff rate of 24 percent, he has boosted his walk rate to over 10 percent with eight walks in his last six games. The left-handed hitting Biggio has an on-base streak of 10 games and hits in nine of his last 10.

The 6-foot-1 Biggio is looking to improve with the leather as he has committed five errors so far this season. Some prospect observers thought the Notre Dame Fighting Irish product was going to start 2017 in Lansing after ending 2016 there but the son of Craig Biggio is more than holding his own so far in the Florida State League.