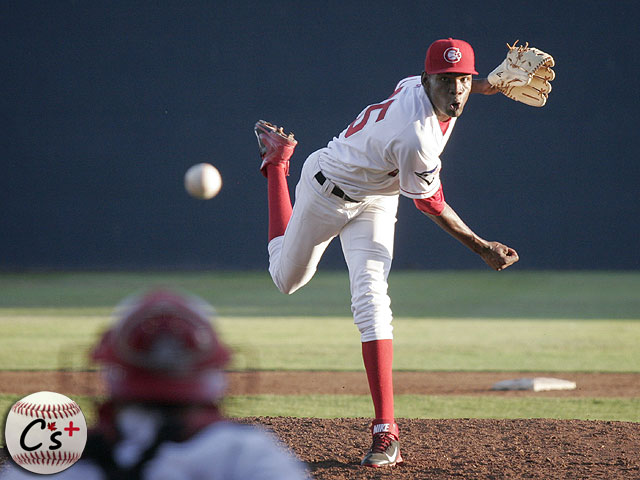 Miguel Castro got his first call-up of 2017 with the Baltimore Orioles last week, showing glimpses of the immense potential that saw him reach the major leagues at the age of 20 two years ago. The 2014 Vancouver Canadians righthander made his O’s debut May 17 in Detroit and pitched a perfect eighth inning that included a strikeout of Jose Iglesias on an 84 mile-per-hour slider. Castro entered the game with a runner on second after a double by Tyler Collins off former Jays minor leaguer Richard Bleier. Castro retired James McCann on a sacrifice bunt to move Collins to third and managed to strand him there with the Iglesias strikeout and an Ian Kinsler grounder to short after a 10-pitch at-bat.

Castro pitched again the next day at Comerica Park and had a tougher time of it by walking J.D. Martinez and Victor Martinez to start the seventh. Castro induced a groundball double play off the bat of Justin Upton before getting Alex Avila to fly out to end the threat. The 6-foot-5 righty came back out for the eighth and walked Collins who was bunted over to second by Andrew Romine. Collins tried to swipe third but he was ruled out after a replay challenge. Castro would get out of the inning by retiring Iglesias on a liner to left.

With Baltimore returning home to face Toronto last weekend, it appeared Castro might get the chance to pitch against his former team for the first time. Instead, Castro watched on from the bullpen as the O’s took two of three from the Jays. After the series, Castro was sent back down to the Double-A Bowie Baysox.

Despite the demotion, Baltimore manager Buck Showalter told The Baltimore Sun they have a plan in place to further develop the 22-year old.

“We had an emergency and he was close by, throwing well. But basically, it’s a guy that kind of fast-tracked to the big leagues and kind of missed Double-A altogether. He’s only 22, so he’s basically like a college senior. … It’s very similar to what’s going on with Tanner Scott, where he’s pitching three to four innings every fifth day and having a workday in between. He’s an interesting case. We’re just trying to get him back doing that.”

Miguel Castro gets ready to throw a change up in the Vancouver Canadians bullpen.

Castro used a three-pitch mix during his short time with Baltimore with a sinker, a slider and a changeup. His fastball velocity was in the 94-95 range with his slider around 88-89 and his change at 85. It’s the latter offering that excites Showalter.

“The changeup is the thing that’s interesting. He’s got a plus changeup for a guy with that above-average velocity. He’s got pretty good shape on a breaking ball, but you ask yourself, guys like him, how they’re going to defend themselves against left-handed hitters? And a changeup, that’s one of the reasons why Toronto was so intrigued with him. They made him closer for what, a month?” 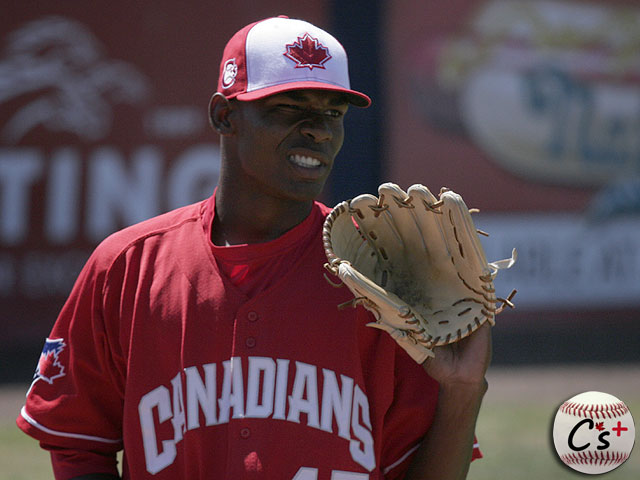 Castro is still trying to find his footing in the major leagues after being rushed up to Toronto two years ago from Single-A ball before being traded to Colorado in the Troy Tulowitzki deal. The La Romana, Dominican Republic native made just 24 appearances for the Rockies over parts of the 2015 and 2016 season and had an ERA of 7.20 after giving up five home runs in 20 innings. Castro was released by the Rockies before this season began but the Orioles claimed him a few days later, a move that did not please a certain segment of the Rockies fanbase. He did not pitch at all in April and only made his debut with the Baysox May 13 versus the Richmond Flying Squirrels when he pitched four innings of one-run ball to earn the victory in his Double-A debut. Castro pitched again Tuesday and gave up two runs over 4-1/3 innings against the Hartford Yard Goats.

It’s amazing Castro just made his Double-A appearance in 2017 after spending parts of the last three years in the majors with the Blue Jays, the Rockies and the Orioles. Here’s hoping the slow and steady approach the Orioles plan to exercise with Castor will help him realize his full potential in his quest for full-time employment in the bigs.