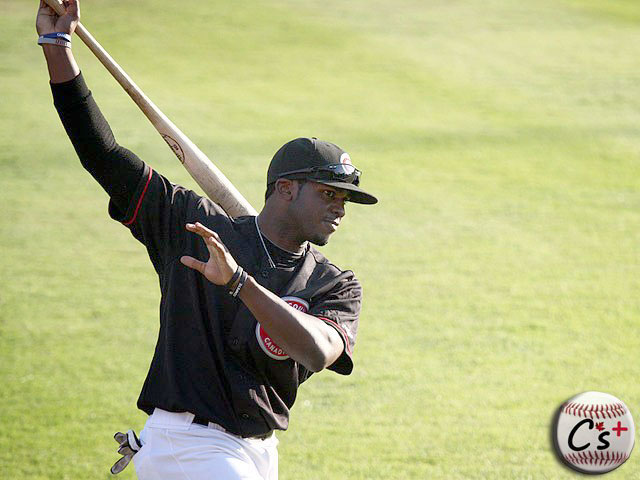 Dwight Smith Jr. has a double and a walk in his five major league plate appearances for Toronto.

Dwight Smith Jr. is not going to Canada just yet with the Toronto Blue Jays but that day should soon be coming. The 24 year-old reached base on a walk in his first major league at-bat in his hometown of Atlanta and added another first to his major league resume with his first hit – an pinch-hit double to left-center field in the 9th inning of Toronto’s 8-4 victory over the Milwaukee Brewers at Miller Park Wednesday afternoon.

Pinch-hitting in the pitcher’s spot for Aaron Loup, Smith was pretty excited about getting that first hit.

“Besides getting drafted, this is the best moment of my life right now. I just paid attention, just watched. I took some swings in between innings just to stay loose and once my name was called, it didn’t matter who was on the mound, I just tried to get a good pitch to hit.”

That pitch was a 96-MPH two-seam fastball from Brewers righthander Wily Peralta, the second one of the at-bat for Smith after taking a similar offering for ball one. Smith took the low-and-away fastball and punched it into left-center at an exit velocity of 92 miles per hour.

Smith had a whirlwind day, leaving the Buffalo Bisons during a series in Gwinnett in his home state of Georgia to join the Blue Jays in Wisconsin. He was summoned after rookie outfielder Anthony Alford suffered a broken wrist just one at-bat after doubling for his first major league hit Tuesday night.

Smith’s time in the majors came to a quick end as he was sent back to Buffalo shortly after Wednesday’s game. If he was bothered about having to return to the minors again, he didn’t show it in his first game back as he collected two hits and a walk to help the Bisons defeat the Gwinnett Braves 4-1 in the series finale. Smith was actually 5-for-8 with a walk and a home run in his first two games back with Buffalo after his first demotion from Toronto. He’s on a five-game hitting streak with the Herd, including four consecutive multi-hit performances. His .321 batting average puts him in the top five of the International League and his .376 on-base percentage has him hovering around the league’s top 10.

Despite his recent performance, former scout and Fan Rag Sports Network writer Bernie Pleskoff believes Smith’s game is limited and that his ceiling is that of a Quadruple-A player.

“Smith is a fairly good singles hitter, but his lack of power may hurt his future as an outfielder at the major league level.

Using good swing mechanics and a disciplined approach at the plate, Smith can use the entire field in his short game approach. He also accepts walks by seeing the ball well, recognizing pitches and using good plate discipline.

In my observations of Smith, I feel he is limited to playing left field due to a weak throwing arm and limited range.”

Smith has heard all the doubts before, especially after a trying 2012 season in Vancouver and a 2015 campaign in New Hampshire that saw him take a step back. He has now stepped up and forward in 2017 and he should be able to visit a certain domed stadium north of the border very soon.