Josh Winckowski won the Northwest League Pitcher of the Year Award in 2018.

2018 Vancouver Canadians pitcher Josh Winckowski is the latest to take the ball on this edition of C’s Chat.

The 6-foot-3 righthander from Fort Myers, Florida is expected to emerge as one of the Toronto Blue Jays top prospects on the mound in 2019 after enjoying a banner 2018. The 20 year-old Winckowski was named the Northwest League Pitcher of the Year this past season after finishing second in the league in earned run average (2.78) and strikeouts (71) and fifth in innings pitched (68.0).

Despite those impressive credentials, Winckowski did not land a spot on Baseball America’s Northwest League Top 20 Prospects list. In BA’s Northwest League Prospects Chat, Bill Mitchell did mention Winckowski was lauded by one of the league’s managers for his competitiveness on the mound. That sentiment was also echoed by his pitching coach Gary White at Estero High School. White told The Naples Daily News that Winckowski is “the nicest guy off the field, but when you get between those white lines, he’s going to come after you. He’s a kid that always wanted the ball, always wanted to win.” 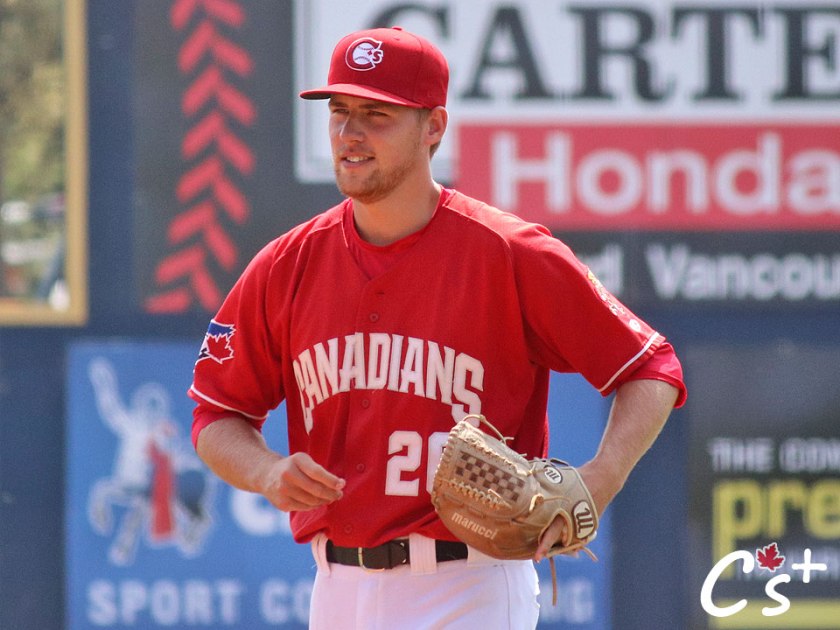 Josh Winckowski averaged just over a strikeout per inning for the first time with Vancouver in 2018.

It was in the 15th round of the 2016 draft that the Toronto Blue Jays selected Winckowski from Estero High. He received a $125,000 signing bonus, forgoing the opportunity to attend Florida SouthWestern State College. According to The Naples Daily News, Winckowski will have up to eight semesters of paid schooling courtesy of the Blue Jays, something that he was happy to receive.

“Obviously your mentality is that you’re going to pitch in the big leagues and that’s your goal. I’ve always kind of been someone that’s if I want something, I go after it. I remember being a young kid and saying, ‘Hey, I’m going to play baseball.’ Adults would say, ‘What’s your Plan B?’ and I’d say, ‘There is no Plan B.’ But obviously, having it is smart you know because some stuff is out of your control – injuries or just certain situations that you can’t control. It did mean a lot to have that knowing that if something does happen, you can go back to school and hopefully get a degree that you can use in life.”

Things were up in the air for Winckowski in 2016 before he decided to turn pro.

“It was kind of a crazy (year) for me. I didn’t really get scouted that much to go to college at all. I got my early offer like halfway through my senior year. It was kind of weird because obviously you’re filling out stuff for pro scouts and going to a few events and they were looking at you and talking to you and saying some pretty good things.

It was kind of weird for me but I had a pretty good senior year. I thank my pitching coach Gary White for that. He helped me out a lot there and then fortunately enough when the draft came around, they called me. They called my name and I went from there.”

Josh Winckowski has made 27 starts in three seasons since turning pro in 2016.

Winckowski’s decision to transfer from Cypress Lake High School in Fort Myers to Estero High before his junior season paid off as he got to experience the tutelage of pitching coach Gary White. The two broke down video of Greg Maddux, Roger Clemens and Corey Kluber to help improve Winckowski’s posture on the mound. Winckowski was able to draw upon plenty of White’s wisdom during their time with the Wildcats.

“He played a little bit of minor league ball for the Orioles and he was obviously a really good pitcher himself and he was a lefty. He kind of prepared me for all of this. He kind of knows and knew some of the things I was going to go through. He was kind of a guy that didn’t really throw all that hard himself, he’s a little bit more of a crafty lefty. He kind of taught me some things that especially down the road I’ve definitely seen be valuable to me like hitting spots and mixing speeds and changing locations.

There’s a lot of guys who come out of the draft and throw really hard in high school. They kind of just blow everyone away and I could do that a little bit but I’ve known how to pitch for a long time. When you come here, you can’t just blow people away all that often unless you’re throwing really, really hard but it’s knowing how to pitch and change speeds (that) has helped me out a lot.”

The first pro stop for Winckowski was not too far away from home as he joined the Gulf Coast League Blue Jays in Dunedin.

“It’s only about two hours away. It’s kind of interesting like you think you’d be able to go home all the time but when you only have like Sundays off in the ‘G’ (GCL), you don’t really go home that often but you go home a few times and then the mom can come visit you here and there so it is nice really nice being close to home because then you can just drive to the complex and having a car there is a pretty big deal. It makes packing a lot easier. (laughs)”

It only took two appearances for Winckowksi to earn his professional victory as he tossed three innings of relief August 3 against the GCL Pirates. He would get one more win against the GCL Tigers East August 17. Winckowski would finish with a record of 2-2 with a 4.61 ERA in his five appearances covering 13-2/3 innings in which he struck out 13 and walked four.

The jump from high school to professional baseball was a big one to make for Winckowski.

“That first year was just kind of getting used to all the routines and the sheer number of days and hours that you’re on the field. That’s definitely something you got to get used to. And physically, I had a lot of catching up to do. That first year, I kind of came in and the velo was down and some other things that was kind of from fatigue or whatever it was.

It was a lot of adjustments. In high school, you face a team that’s maybe one or two hitters you got to worry about and then you get here, every hitter one through nine is really good here. It’s definitely a lot of physical and mental adjustments that you got to make and it’s been a really big growth period. Still to this day, I’m still learning a lot.”

The 2017 campaign saw Winckowski report to Bluefield where he took some lumps before turning his season around. One highlight was a 10-strikeout game against the Danville Braves. He ended the year with five shutout frames against Johnson City in his lone relief appearance August 30. His final numbers were another 2-2 record with a 5.33 ERA.

It was really good to finish strong. It kind of set me up in a good mental state for coming into (2018). It made it a lot easier to go home and do all the things that I needed to do in the offseason. I learned an insane amount last year and I think it’s all helped me out this year.”

Vancouver, British Columbia was next up for Winckowski in 2018. He took the loss in his first two starts with the C’s in an up-and-down first half. His first win came at the end of June when he limited Salem-Keizer to two runs over six innings. That was followed up with five shutout innings to earn another victory in Everett July 6.

“The first half wasn’t bad. At different times, I got to have fastball location and then I had my slider and then sometimes the slider wasn’t on.

In the second half, it kind of just all came together. I’ve really been locating the fastball and I’m throwing my slider really well and mixing in the changeup there. When I have the combination of those three pitches going, it’s usually going to be a pretty good outing.”

The second half saw Winckowski spin seven innings of one-run ball against the Eugene Emeralds July 29 before tossing six shutout frames in Hillsboro August 4 for a second straight win. Two more scoreless outings in Salem-Keizer August 13 (6-1/3 innings with a career high nine strikeouts) and at home against Spokane August 19 helped Winckowski extend a shutout string of 22-1/3 innings that ended August 25.

That effort against Spokane earned Winckowski his second Northwest League Pitcher of the Week award for the month of August after earning one for the week of August 4. He found out the good news from one of his biggest fans.

“To earn that award was pretty cool. It’s kind of funny. My grandpa was the one that found out. He’s always checking on my all my stats and all that stuff and he saw those and texted me about it.”

The start against Spokane in a playoff-type atmosphere between the top two teams in the North Division was one Winckowski rated pretty highly.

“It was probably top three for sure. I’d have to dig a little deeper into if it’s the best start of my career. You don’t put a lot of pressure on yourself but you definitely know what’s behind the game, you know the rankings so you got into that one. They’d been hitting really well. We knew that as a staff. You go into it hoping to have your best stuff and luckily I had pretty good stuff that day. I just sort of put it together.

The radar gun showed Winckowski hitting 100 miles per hour on the radar gun during that start against Spokane but he was not buying what the gun was selling.

Winckowski says he uses a different type of fastball depending on the handedness of the batter.

Winckowski also adds he has two variations of his slider.

“I kind of have like a harder, sharper one and then I have like a little bit of a slower, big breaker that I kind of just use on what I’m seeing from the hitter. I usually use the big breaking one for a strike. I’ll set it like I get a chance or something to drop it in. When I’m going for the strikeout, I’ll start the harder one that’s like 86-87 (miles per hour) at the knees and just drop it in to the dirt for when I’m going for a strikeout.”

Winckowski is expected to put his three-pitch mix to the test with the Lansing Lugnuts in 2019.

A big thank you again to Josh Winckowski for being the latest guest on C’s Chat and to C’s Media Relations Assistant Sharlene Canning for setting up the interview.