Chris Bec celebrates after tagging out Ricardo Geneves (#9) at the plate to end the seventh inning.

The Vancouver Canadians are beginning to find their stride in 2018. The C’s won their third in a row as they got by the Salem-Keizer Volcanoes 3-2 at Nat Bailey Stadium Saturday night.

All the scoring came in the first two innings. Vancouver was first to touch home plate with a run in the first. Vinny Capra singled off Salem-Keizer starter Sean Hjelle before Hunter Steinmetz lined a base hit to left to put two men on with nobody out. It looked like the C’s were going to squander the opportunity when Christopher Bec flied out to shallow center and Griffin Conine grounded out to first to move the runners over. Jake Brodt would rip a single up the middle to score Capra but Steinmetz was tagged out at the plate on a 8-3-2 putout to end the inning. Vancouver skipper Dallas McPherson came out to argue but the C’s were denied a multiple-run inning. 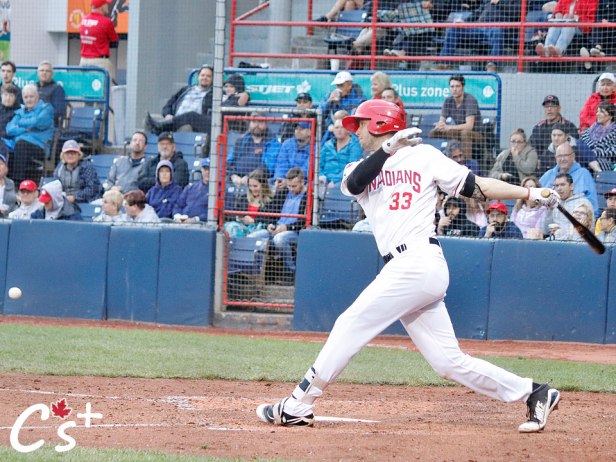 Josh Winckowski needed just seven pitches to retire the side in order in the first but was greeted by a pair of singles to center by Trevor Abrams and Robinson Medrano in the top of the second. The two runners moved up 90 feet on a wild pitch. Winckowski would strike out Ricardo Genoves but a missed catch error by Bec would score Abrams with the tying run and move Medrano to third. A Kevin Rivera groundout to first would score Medrano to make it 2-1 Volcanoes. 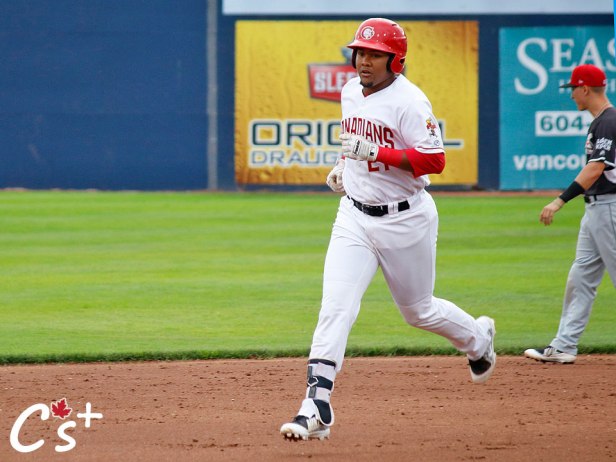 Salem-Keizer turned the ball over to Stetson Woods in the second inning and he was taken to the woodshed when Bryan Lizardo cleared the big wall in right field to tie the game at 2-2. One out later, McGregory Contreras made it rain with a high fly ball that made it over the fence in left to give Vancouver the lead.

Last night Mc Gregory Contreras hit his 4th homerun of the season, which was the game winning run vs Salem-Keizer #AtTheNat #MiLB pic.twitter.com/ojlS49Q4gX

That lead would stand up as Winckowski pitched six innings of four-hit ball before turning things over to Marcus Reyes for the seventh. Genoves would get aboard on a base hit to right and tried to score on a two-out pinch-hit double by Jose Layer to center. Steinmetz teamed up with second baseman Brandon Polizzi on the relay throw to home where Bec tagged out Genoves. 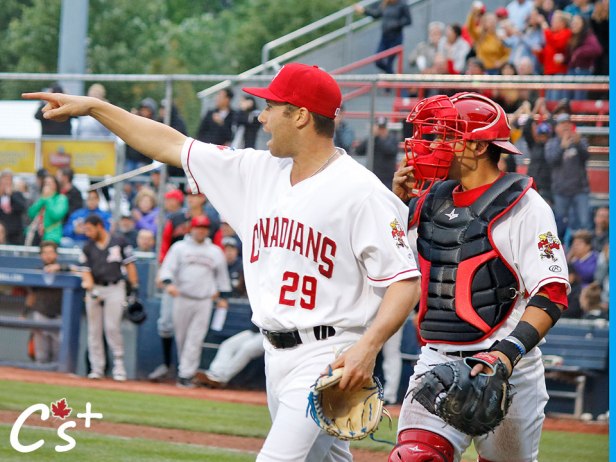 Marcus Reyes salutes his defence coming off the field at the seventh inning.

Volcanoes manager Hector Borg argued the call vociferously and was tossed from the game, proving resistance is futile. Borg then kicked dirt to cover home plate before exiting.

Kyle McPherson singled to start the Salem-Keizer eighth but was doubled off on a liner to second by David Villar. That allowed Reyes to face the mininum before Cobi Johnson took over in the ninth. Johnson would plunk Abrams to begin the inning and that led to Nico Giarratano coming into the game to pinch-run. Medrano flied out to right and pinch-hitter Wander Franco flied to left before Rivera struck out to end the game. 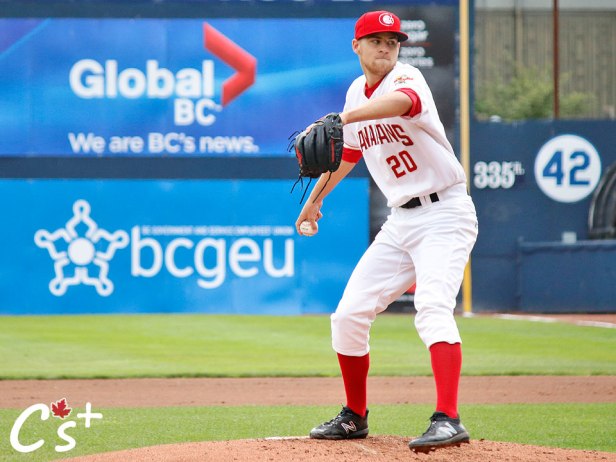 Josh Winckowski picked up his first win of the season with six innings of two-run ball.

Reyes’ offerings ranged from 77-91 and used off-speed offerings of 81 and 82 to record the first two outs of in the seventh.

Cobi Johnson collected his second save of the season with a scoreless ninth inning.

Despite a couple of errors, the C’s did make some fine plays on defence. The sixth inning saw Lizardo male a nice pick on a Rincones grounder to third and Brodt made a nice scoop on a low throw to complete the putout. That was followed by Polizzi showing nice range up the middle to retire Abrams as he went to his right to get Abrams for the second out. 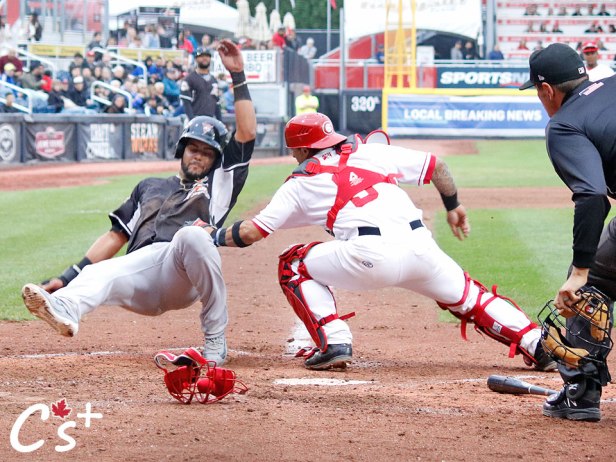 Christoper Bec applies the tag on Kevin Rivera at home plate in the fifth inning.

Bec nearly made it three home runs on the night for Vancouver but his fly ball to left was caught at the warning track by Rincones in the home half of the sixth. The University of Maine catcher had a busy night behind the plate by tagging out two runners trying to score. Before tagging out Genoves to end the seventh, Bec was called upon to protect the pentagon in the fifth.  Rivera singled to start the inning for Salem-Keizer and moved to second on a wayward pickoff throw by Winckowski. Rivera made it to third on a grounder by Mikey Edie grounder to short but he was cut down at the plate on a Christopher Burks ground ball to Brandon Polizzi at second.

The Canadians were outhit by the Volcanoes 7-5 but made the most of their hits thanks to the home runs by Lizardo and Contreras. They were 1-for-3 with runners in scoring position and left two men on.

Winckowski allowed just four hits and hit a batter over his six innings of two run ball. Reyes worked around three hits over two scoreless frames before Johnson overcame a plunk to the leadoff man in the ninth before retiring the side in order.

Vancouver is now 7-9 on the season to leave them 2-1/2 games behind idle Everett in the Northwest League North Division. Salem-Keizer is now tied with Hillsboro at 10-6 atop the South.

Catcher Yorman Rodriguez is listed on the roster as #34, taking over Dalton Rodriguez‘s number after the righthander promoted to Lansing.

The series with Salem-Keizer continues on Canada Day Sunday at 1:05 pm. Lefthander Elio Silva (1-1, 4.09) gets the start for Vancouver while Gregory Santos (2-0, 3.00) will pitch first for the Volcanoes. Rob Fai will broadcast the game on CanadiansBaseball.com.