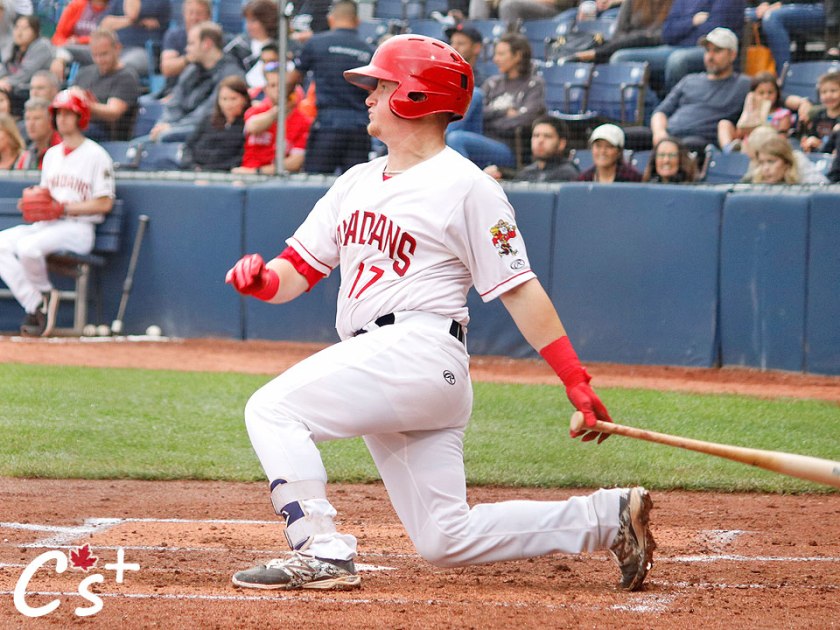 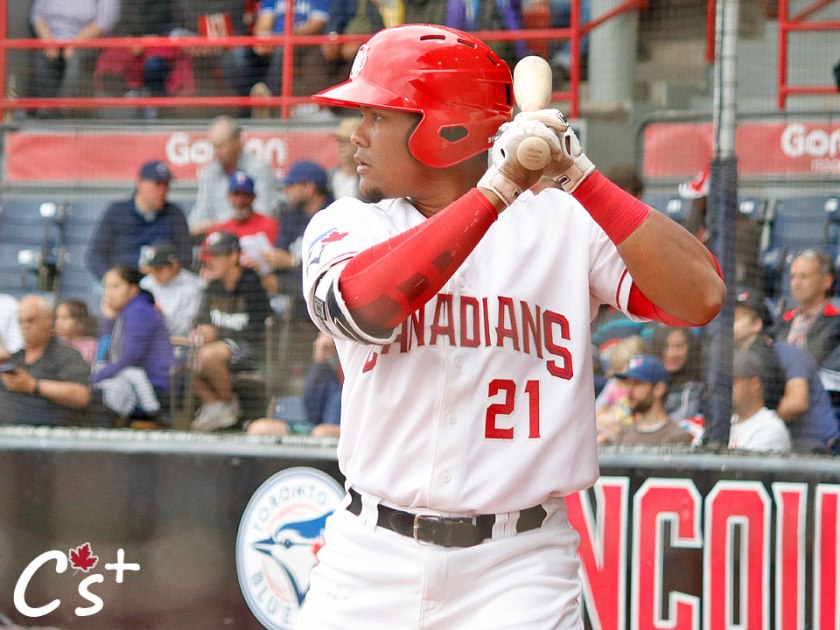 Bryan Lizardo was 4-for-4 with three runs scored, three RBI and a stolen base against Salem-Keizer Friday.

The Vancouver Canadians have won two in a row for the first time this season thanks to a big game from their bats. The C’s opened up a five-game series against the Salem-Keizer Volcanoes with a 11-1 victory at Nat Bailey Stadium Friday night.

Griffin Conine got things rolling for the Canadians in the second inning with an infield hit to second off Salem-Keizer starter Miguel Figueroa. After moving up 90 feet on a passed ball by Ricardo Genoves, Conine came home on a single to right by Bryan Lizardo. Lizardo would score the C’s second run when Brett Wright stung the ball for a single up the middle before Sterling Guzman reached on an infield single to second. Wright moved to third on the play and would score the third run of the inning when Brandon Polizzi dropped a triple down the right field line.

Vancouver would score another run in the third when McGregory Contreras and singled to put runners on the corners before Lizardo lifted a sacrifice fly to bring home Contreras.

C’s starter Jordan Barrett was cruising through the first three innings, striking out the side in the second among six strikeouts and had allowed just one walk. Kyle McPherson nearly went deep when he hit a fly ball to the warning track in left to start the fourth but Diego Rincones would go deep to left to break up the no-hit bid and the shutout.

Vancouver would get that run back in the bottom of the fourth against Volcanoes reliever Trent Toplikar. Jesus Severino picked up a one-out single to right and scampered home on a double to left by Vinny Capra to make it 5-1 C’s.

A two-out rally in the fifth produced the sixth Canadians run. Lizardo singled to left against Salem-Keizer reliever Solomon Bates before stealing second and getting to third on a Genoves error from behind the plate. Wright and Guzman walked to load the bases before a rattled Bates committed a balk to bring home Lizardo.

Griffin Conine scored Vancouver’s first run and had a triple as part of a three-hit night.

Vancouver would put this one well out of a reach with a five-run sixth against the Volcanoes Alejandro De La Rosa. Vinny Capra heard ball four with one out and would reach third on a wild pitch and an infield single to third by Contreras. A triple to right by Conine scored Capra and Contreras to put Vancouver ahead 7-1. Lizardo would bring home Conine by punching one up the middle and he would score on a two-run home run by Wright to give the C’s a double-digit lead. 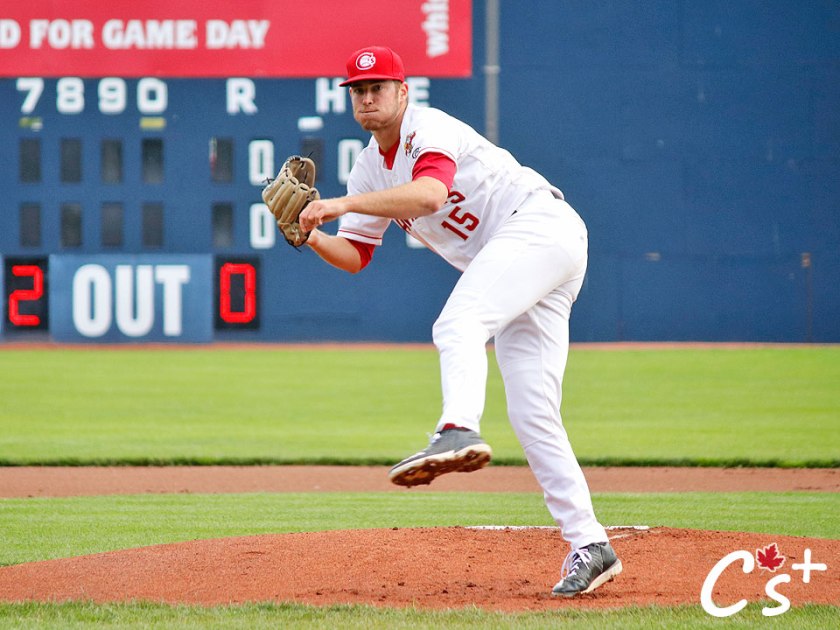 Barrett was one strike away from qualifying for the victory but he ran into trouble by walking the bases loaded as Kevin Rivera, Jose Layer and McPherson were given free passes. That made it five walks for Barrett after he had struck out eight. Vancouver manager Dallas McPherson went to Will McAffer out of the bullpen. The North Vancouver native retired the league’s best hitter in the Northwest League in Rincones—who had homered off Barrett in his last at-bat—on a pop-out to short to leave them loaded. Rincones has a Northwest League-best .444 batting average.

Will McAffer ran his record to 3-0 with 3-1/3 perfect innings of relief Friday.

McAffer put together 3-1/3 innings of perfect relief with three strikeouts to earn the victory. Justin Watts finished up with a one-hit ninth by striking out two to give the C’s a combined two-hitter.

Keenan Bartlett was the only pitcher to keep the Canadians in check with two scoreless frames. The C’s had at least one hit in every inning except the first and scored in five different frames. They were 6-for-11 with runners in scoring position and left seven men on base.

Justin Watts had two strikeouts in a shutout ninth inning against the Volcanoes.

Vancouver improves to 6-9 on the season while Salem-Keizer falls to 10-5. The C’s remain three games behind Everett in the North Division and are tied with Spokane. Tri-City is in second place at 8-7. Salem-Keizer holds a one-game lead over Hillsboro in the South.

Barrett’s offerings ranged from 77-93 miles per hour. He struck out the side on 90 MPH pitches and had another at 92.

Hunter Steinmetz made his Northwest League debut against Salem-Keizer Friday.

Hunter Steinmetz made his C’s debut in center field and was robbed of extra-bases in his first at-bat on a nice leaping catch by Volcanoes right fielder Christopher Burks. Steinmetz was also called out on a bang-bang play at first on a tapper back to the mound. He is wearing #26, which was worn by catcher/outfielder Reilly Johnson before his promotion to the Lansing Lugnuts.

Nick Podkul started the game for Vancouver at second base and struck out in his first at-bat. He was replaced at the keystone in the top of the third by Polizzi, who began the game in left field. Contreras was summoned from the bench to take over in left and had a couple of hits.

Polizzi enjoyed his first two-hit game of the season with a triple and a single. The Cal State-Dominguez Hills product seemed annoyed with an inside pitch from Figueroa and disagreed with a strike call during the at-bat. He channeled his frustration positively by motoring around the bases for a triple that brought in Wright.

Brett Wright had a single and a home run in his second game with Vancouver.

It was also a breakout night for Wright as he collected his first two professional hits, including a home run. The New Caney, Texas native hit 11 home runs with the Auburn Tigers this season before being drafted by Toronto in the 26th round.

Bryan Lizardo continues to wield the hot hickory. He extended his hitting streak to nine games and is hitting .526 in the friendly confines of the Nat. Lizardo is now hitting .325 after beginning the year 0-for-12.

Jesus Severino was one of eight Canadians hitters to record a base hit Friday.

Jesus Severino picked up his first hit as a Vancouver Canadian with a single in the fourth-inning. He was 0-for-6 with the C’s in 2017 and 0-for-2 before his base hit. He would later score on a Capra double.

The C’s will have another new player in the mix this weekend. Catcher Yorman Rodriguez has been called up from the Gulf Coast League. The Venezuelan did play five games with Vancouver last year when he hit .190 in 21 at-bats.

2015 C’s outfielder Andrew Guillotte has been called up to Buffalo from New Hampshire. He has a posted an on-base percentage of .336 in 70 games with the Fisher Cats. Guillotte batted .304 during eight games with the Bisons last year.

The second game of this five-game series goes tonight at 7:05 pm at Nat Bailey Stadium. Josh Winckowski gets the ball for Vancouver and according to Volcanoes broadcaster Wes Tucker, San Francisco Giants second-round pick Sean Hjelle will be on the hill for Salem-Keizer. Hjelle was teammates with 2017 C’s lefthander Zach Logue during college ball in Kentucky.

Your weekly must-listen about the #BlueJays @MiLB system. https://t.co/JCicFCCVUx

The C’s return to Scotiabank Field tonight at 7:05pm. pic.twitter.com/faaV3P5veJ

Very impressive night by the @vancanadians, contributions from up and down the line up. Everyone has a hit, expect for the new guy Hunter Steinmetz but every out of his has been loud. Currently up 11-1 in the bottom of the 8th

In case you haven’t seen this Babe Ruth signed ball #AtTheNat…you can find it next to our Rogers Guest Services Booth pic.twitter.com/jmvGdPz1aX

Have you ever seen a ring more beautiful than this one? Finally got to see this one in person! It’s gorgeous! Congrats 2017 @vancanadians team and my nephew, @Brock_Lundquist on the Northwest League Championship. ⚾🏆💍👍👊😃 pic.twitter.com/Ly5dlHn6Lm