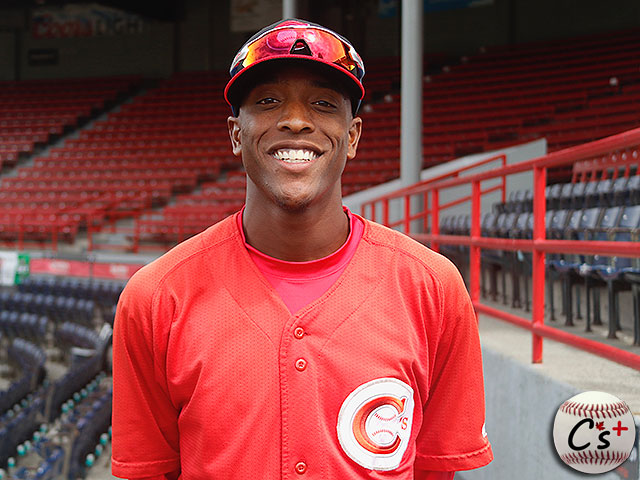 Reggie Pruitt hopes he will have a lot to smile about with the Vancouver Canadians in 2017.

Reggie Pruitt is impressed with the city of Vancouver and if Opening Night is any indication, the baseball fans in the city will be impressed with him too.  The 20 year-old outfielder drove in the first two runs of the season with his first Northwest League hit in the C’s 6-1 victory over the Eugene Emeralds at P.K. Park Thursday night. The right-handed hitting Pruitt lined an opposite-field single to right to put the Canadians ahead in the third inning. He drew a walk later on in the game and nearly had an infield hit before being thrown out by half-a-step.

Pruitt and his teammates arrived in Vancouver just a few days ago before hitting to road for Oregon but the 6-foot-tall center fielder liked what he saw of his new dwelling.

“I kinda went through the city (Sunday) night when we got in,” said Pruitt. “It kinds of reminds me like a little bit of New York but like a little bit quieter, not snow in your face but I love it. The weather’s not too hot, not too cold, perfect baseball weather so as of now, I’m loving it.”

Pruitt says he’s looking forward to playing in front of sold-out crowds at Nat Bailey Stadium on a daily basis.

“I’ve heard all about it ever since I got drafted how Vancouver is the place you want to be, the place you want to go,” said Pruitt. “It’s packed out every night, especially if you win so hopefully we’ll do a lot of that…We’re ready to get the ball rolling. We feel like we got a great team throughout. We got all the pieces to hopefully to put one of those 2012-2013 type of teams together and make a run at the championship, win a lot of games and keep the fans happy.”

Pruitt’s arrival in Vancouver was just the second time he was in Canada after visiting Toronto as a youngster. As fate would have it, Toronto would play a role in his life again when the Blue Jays drafted Pruitt in the 24th round of the 2015 draft out of Kennesaw Mountain High School in Georgia. It was widely believed that he was going to attend Vanderbilt University instead but the Blue Jays gave him $500,000 reasons not to go to school.

“I was on the way to a travel baseball game and the Jays, my scout Mike Tidick called me and he said ‘We just picked you.’, said Pruitt. “I hadn’t even been watching and I got a couple of texts, and they were like ‘Yo, you just got picked. Congratulations!’  I was like, ‘Well, thank you.’ I said thank you and everything. (Tiddick) said ‘This isn’t like a dummy pick. This is like, for real. We’re going to try to make a run at you.’ I told him what needed to happen and he said, ‘Alright, we’re going to see what we can do.’ The Jays held up their end of the bargain and I held up mine so I ended up (with Toronto).”

Pruitt played in the Gulf Coast League in 2015 where he put up a batting line of .223/.309/.289 and struck out over 25 percent of the time. He did showcase his ’70’ speed on the 20-80 scouting scale by stealing 15 bases in 17 attempts. He was bumped up to Bluefield in 2016 and improved his slash line to .237/.316/.266. Even though his slugging percentage was down, he did improve his line drive to over 22 percent, a nearly nine percent gain. He remained just as proficient on the basepaths by swiping 16 bags while only getting caught twice.

Pruitt believes he has made gains in his all-around game.

“I’ve done a lot of growing from playing defence, baserunning, hitting and everywhere I’ve done growing,” said Pruitt. “It’s just crazy to see how back then I though that stuff like this was hard. I’m not saying it’s easy now but everyday things get easier and easier and obviously, it’s not like I’m just going to go out there and get three hits (a game) but I’ve done a lot of growing to where I’ve put myself in a good position to have success. At the beginning of my career, I didn’t have a lot of success and that’s one part I really grew in is being mature when you fail because baseball is a game of failure so I’ve had to do a lot of maturing on that end. Overall, I like how I’ve grown, I’ve liked how my career has gone and I’m just ready to add on another year.”

Entering his third year in the Blue Jays system, Pruitt says he has learned a lot from the team’s instructors.

“Whether it’s a lefty pitcher’s move when I’m at first base or they can see something in my swing that I can’t feel but they can see it,” said Pruitt. “It’s just things that I could never thought would help and when you put them in the game and the game speeds up, they actually do help a lot.”

One instructor Pruitt has gotten close to is baserunning coordinator Tim Raines.

“Me and Rock are actually, that’s like my best buddy,” said Pruitt. “Whenever he comes down to Florida or whenever he’s anywhere I am, we always end up golfing, going out to eat, long conversations on the phone. He calls me during the offseason about 3-4 times just to check up on me, see how I’m doing.”

On the subject of major leaguers, Pruitt said he also had a chance to interact with Blue Jays third baseman Josh Donaldson during his recent rehab assignment.

“We could just sit there and listen to that guy talk about hitting all day because he’s an MVP, one of the best hitters in the game,” said Pruitt. “That guy is definitely one guy that I listen to a lot while he was down there rehabbing…Whenever guys do come in, I try to pick their brains a little bit, no matter who they are. Even if it’s guys one level above you, try and pick their brains and see what they know that you don’t know.”

Pruitt says he has been trying to improve his swing and put the ball in play more.

“I’ve definitely been working on staying on my backside and staying balanced in my swing because I’ve always been kind of a — quote-unquote — front foot hitter,” said Pruitt. “I’m a contact guy and I don’t hit for huge power or anything like that but I know when I stay balanced and when I put myself in a good position to hit, I can juice the ball to the gaps and I got wheels so I might as well use them (for) doubles, triples.”

When he was asked to compare the feeling of flying around the bases or running down a ball in the outfield gaps, Pruitt likes making a difference on defence.

“For me, I like chasing something down in the outfield because I like giving that guy, when it comes off the bat, he’s like ‘Oh, I got a double!’ and then I come in out of nowhere, lay out, grab it, toss it back into the infield and that guy is jogging back to the dugout. That’s definitely the best part for me, running them down in the outfield.”

“I think he probably questioned whether he was going to come here or not during extended (spring training)”, said Miller. “There was a point when he wasn’t handling his at-bats, I think he was putting pressure on himself…The one thing if you watch Reggie, and I’m going to tell him, ‘Reggie, you can start out the year oh-for-50, you’re going to be in center field.’ He can flat out play center field. I appreciate the pitching and defence, he’s a real good center fielder.”

A huge Atlanta Falcons fan, Pruitt was naturally disappointed with how the Super Bowl ended but he sent out a tweet saying the Falcons will “get ’em next year.” He says trying to stay positive is something he always tries to do.

“Once I realized that things in life are going to happen, no matter what,” said Pruitt. “The reaction, the things that matter, what matters is after the fact how you react towards what happened. If you act negative, it’s probably not going to help you out but if you act positive, instead of saying ‘Why does this keep happening to me?’, you say ‘What can I do to change it?'”

Pruitt is hoping for a positive experience with the Vancouver Canadians in 2017.