Griffin Conine had two doubles and drove in a run for Vancouver Tuesday.

The three Vancouver Canadians going to the Northwest League/Pioneer League All-Star Game showed why they deserved to be heading to Grand Junction, Colorado next week. Outfielders Tanner Kirwer and Griffin Conine drove in a run apiece and Cobi Johnson earned the save as Vancouver doubled up Eugene 6-3 at Nat Bailey Stadium Monday. The win gives the C’s a 6-4 series victory over the Em’s and keeps them tied for first place for the second-half North Division title with Spokane with a record of 5-3.

Brandon Polizzi kick-started the offence with the first of three hits in the third inning Tuesday.

The C’s broke out on top with two runs in the third inning against Zach Mort. Brandon Polizzi drilled a single up the middle before Kirwer laid down a bunt single to third base. Polizzi and Kirwer pulled off a double steal before Polizzi scored on a sacrifice fly to center by Vinny Capra for the game’s first run. Conine put Mort through the ringer by fouling off eight pitches before lining a double to left just out of the reach of Grant Fennell.

The Emeralds were shut down by Joey Murray for the first two innings but got to Sean Wymer in his second inning of work. Levi Jordan dropped a bunt to third to get on base before stealing second. He would score on a Luke Reynolds base rap to center. Jonathan Sierra would single to left with one out and he and Reynolds moved up another 90 feet on a wild pitch. Wymer would strand those runners by striking out Jake Slaughter and Luis Diaz looking. Wymer fell behind in the count to Diaz three balls and no strikes before ralllying to throw three straight strikes. Eugene manager Steven Lerud came out to argue after the strikeout of Diaz and he was ejected from the game by home plate umpire Andrew Clark. 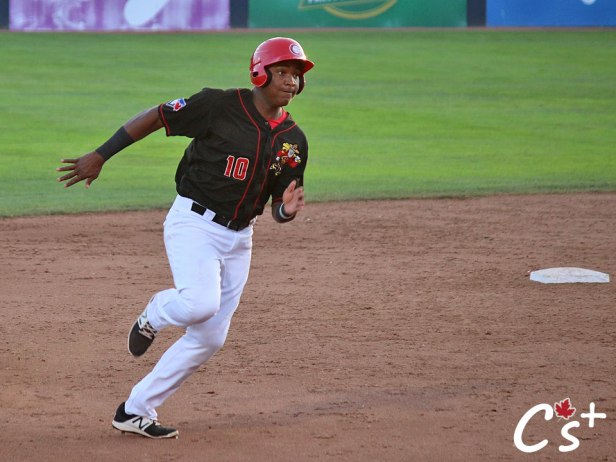 Jesus Severino heads to third base after a single by Nick Podkul in the fourth inning.

Eugenio Palma took over on the mound for Eugene in the fourth and retired the first two hitters he faced before giving up back-to-back base hits to Jesus Severino and Nick Podkul to right field. An errant pickoff throw by Palma allowed Severino to score and Podkul to move to third. Polizzi followed with a infield single to first that drove in Podkul for the fourth Vancouver run.

The Emeralds chipped away with another run in the fifth off Wymer. Eric Gonzalez walked to begin the inning and scampered home on a one-out by Fennell to right field. Fennell reached third on a Jordan fly ball to right but Wymer stranded another runner 90 feet away by freezing Reynolds on a called strike three.

Will McAffer took over for Wymer in the sixth and was lit up for a leadoff home run by Nelson Velazquez that just stayed fair down the left field line to make it a one-run ball game.

The C’s got some insurance in the seventh when Polizzi singled to left, stole second and went to third on a Cam Sanders wild pitch. Kirwer cashed in Polizzi with a base hit to left to make it 5-3 Vancouver. Kirwer stole his second base of the game and would get to third on walks by Capra and Conine. Bryan Lizardo hit into a 3-6 fielder’s choice against Em’s reliever Sean Barry to score Kirwer for the second run of the inning.

Marcus Reyes pitched two shutout innings of one-hit ball and Johnson worked a perfect ninth to make sure this one went into the win column for Vancouver.

I fell asleep on Murray’s velocities but his pitches worked as his two scoreless innings would attest to that.

Tanner Kirwer had two hits, two runs and a run batted in for the C’s Tuesday.

C’s left fielder McGregory Contreras and righthander Jose Espada are the Northwest League Player and Pitcher of the Week for July 23-29.

Congratulations to outfielder McGregory Contreras and pitcher Jose Espada for being named the Northwest League’s Player and Pitcher of the Week for July 23-29. Contreras hit .450 with seven extra-base hits and is a surprising omission from next week’s All-Star festivities. Espada pitched six shutout innings in a win over Eugene July 27. He is 2-3 on the season with a 3.79 ERA to go along with 49 strikeouts in 40-1/3 innings.

Both teams had issues with the home plate umpire. Vancouver manager Dallas McPherson argued a bunt laid down by Lizardo in the second inning that appeared to go foul but Gonzalez quickly reacted from behind the plate and threw down to first to get the out. McPherson would continue the argument after the half-inning was over.

Podkul made a tremendous effort on a ground ball by Sierra in the sixth inning and nearly threw him out by the seat of his pants. Polizzi made a key play from left field later in the sixth as he threw out Jake Slaughter at second for trying to stretch his single into a double. McAffer was able to get the next two hitters after that and strand Sierra at third. That made it three innings in a row that Eugene left a runner 90 feet away.

Polizzi led Vancouver’s 10-hit attack with three while Conine, Kirwer and Severino had two apiece. Conine also drew a walk to get aboard three times. Podkul had the other hits while Capra and Contreras walked. Polizzi and Kirwer stole two bases apiece. Vancouver had three walks to help offset five strikeouts and were 3-for-9 with runners in scoring position.

Murray remains unscored upon as he extended his scoreless innings streak to 16 to keep his earned run average at 0.00. He allowed just one hit and struck out one over two innings. 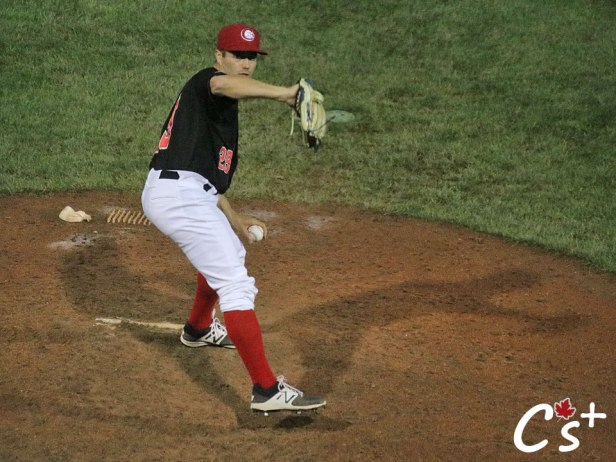 Marcus Reyes continues to keep his ERA below 1.00 after two shutout innings Tuesday.

Wymer gave up two runs on four hits and a walk over three frames but struck out three to help limit the damage. McAffer gave up a solo home run and two other hits but struck one in the sixth. Reyes cut his ERA down to 0.77 with one-hit relief over two innings in which he struck out two. It’s surprising his performance did not merit a berth in next week’s NWL/PL All-Star contest.  Johnson lowered his ERA to 2.25 with a shutout ninth to collect his sixth save in as many chances. C’s pitchers compiled an impressive strikeout/walk ratio of 9-1. 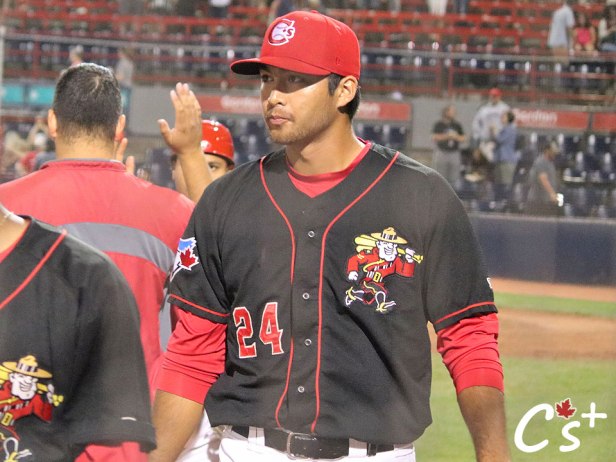 Cobi Johnson has not been scored upon in nine of his last 10 outings for the C’s.

The C’s are in Hillsboro to begin a five-game series. Arizona’s 2017 third round pick Matt Tabor (1-1, 4.42) is set to throw the first pitch for the Hops at 7:05 pm at Ron Tonkin Field. Lefthander Nick Allgeyer (0-0, 3.24) will start on the mound for the Canadians. The game will on CanadiansBaseball.com with Rob Fai and MiLB.TV.

Thank you to the fans ❤️ pic.twitter.com/MlYY1rCpbh

The Blue Jays have helped collect over 1,000 pounds of food for the @Dunedincares Food Pantry this season! Yesterday, Riley Adams and Connor Eller visited Dunedin Cares to help sort and distribute donations for local families in need! pic.twitter.com/8r7HNvBc9F

Hot start! Since joining the Blue Jays on July 3rd, OF Brock Lundquist leads the Florida State League in On-Base Percentage (.455) and is third in average (.361) and On-Base Plus Slugging (.982). pic.twitter.com/K1I4savLKi— Dunedin Blue Jays (@DunedinBlueJays) August 1, 2018

Congratulations to Cavan Biggio on the first two-homer game of his career!

The Fisher Cats are on a season high seven-game winning streak, averaging 8.6 runs per game during this stretch. pic.twitter.com/9FmWXNsbLx

We start today’s game with our second seven-run inning in the last 24 hours!

Another one! Cavan Biggio belts a two-run dinger to make it 10-0. His second of the day moves him into a tie for the league lead (23).

Chad Spanberger launched his first Lugnuts homer amid a three-hit game, Reggie Pruitt added three hits of his own, and the Nuts finished a strong road trip by holding off the Dragons, 8-7.

A weird play: Reggie Pruitt hits a two-out sinking line drive to Dayton 3B Jonathan India. In India’s attempt to catch it, something goes wrong, he doubles over in pain, and Spanberger scores from 3rd.

Important to note: India remains in the game.