Tanner Kirwer lands on home plate with the first run of the game against Eugene Friday.

The Vancouver Canadians used a four-run first inning to hold off the Eugene Emeralds 5-1 at Nat Bailey Stadium Friday night. The C’s improved their second-half record to 2-2 with the victory.

Tanner Kirwer got things rolling for Vancouver in the bottom of the first with a leadoff walk against Eugene starter Jose Albertos. Kirwer proceeded to steal second base and would get to third on a throwing error by Emeralds catcher Eric Gonzalez. Griffin Conine would get aboard on a one-out walk and stole second to give Vancouver two runners in scoring position. Kirwer and Conine were brought home on a single to right by Yorman Rodriguez. 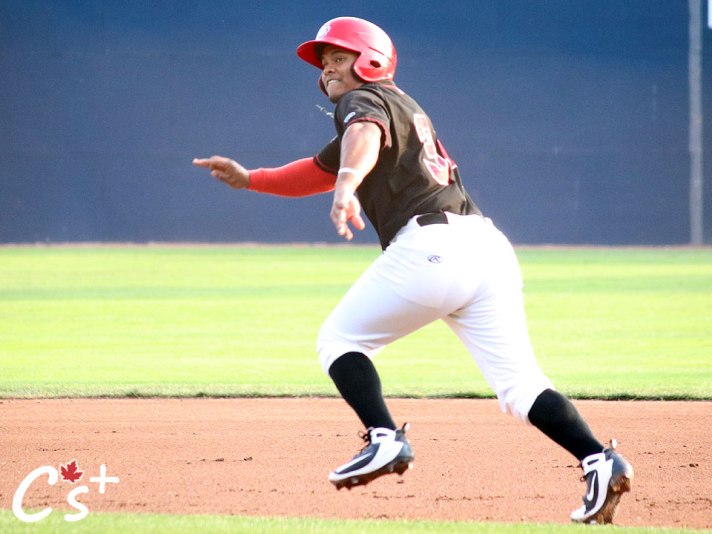 Yorman Rodriguez goes from first to third on a single before scoring on a wild pitch Friday.

The first-inning rally continued when Bryan Lizardo moved Rodriguez to third with a base hit to right before stealing second base to put two more runners in scoring position. Albertos threw one to the backstop to score Rodriguez before surrendering a Jesus Severino single to right to drive in Lizardo. Eugenio Palma relieved Albertos and got out of the inning despite a walk to Brett Wright and a Gonzalez passed ball that led to runners occupying second and third base again.

McGregory Contreras rounds third after his seventh round-tripper of the season.

The C’s added one more run in the third when McGregory Contreras connected for his seventh home run of the year off Palma that found the seats on the left field porch.  The trio of Carlos Vega, Riley McCauley and Cam Sanders held the Canadians in check the rest of the way.

Eugene was shut down by Jose Espada over the first six innings and by Will McAffer in the seventh before scoring in the eighth. Luis Diaz hit a sky-high popup to first base that fell between Severino and Wright before Fernando Kelli doubled to left off McAffer to send home Diaz. Connor Law got the next two hitters in order and retired the side in the ninth thanks in part to a baserunning blunder by the Emeralds.

Jonathan Sierra began the inning with a base hit to left before Luis Vazquez dropped in a ball just in front of Conine in right. Sierra took his time to get to second after going halfway to make sure the ball would touch green. His lack of urgency to get to second allowed Conine to fire a seed to Vinny Capra at short to force out Sierra. Law would get two groundball outs, including one to himself off Gonzalez to end the game.

Jose Espada put together six shutout innings to earn his second win of the season.

Espada received some tough love in the first inning when manager Dallas McPherson—not pitching coach Jim Czajkowski—paid a visit to the mound. Espada got Kelli to fly out on two pitches but gave up a double to center by Grant Fennell and walked Luke Reynolds. Whatever McPherson said during the one-sided lecture had the desired effect as he got ahead of Nelson Velazquez at 0-2 before inducing a 6-4-3 double play ground ball to end the inning.

Kirwer got on base in the first two innings by following his leadoff walk in the first with a double to left in the second. He was picked off at second by Palma on a very questionable call that brought McPherson out to argue.

Kirwer put his speed and anticipation to good use on a diving catch to rob Velazquez of a base hit in left-center field in the fourth inning. Kirwer got a good jump on the ball to make the play and that turned out be crucial after the next batter Sierra doubled to right. Instead of a run-scoring double for the Emeralds, they were held off the board.

Espada sat down the next six hitters in a row and got some help from Conine who made a diving catch in right field on a ball dropping in front of him to retire Gonzalez.

Contreras remains a work in progress defensively. The left fielder had a ball clank off his glove on a line drive by Jake Slaughter that was ruled a double to begin the fifth inning. Slaughter would be stranded at second after Conine made a strong throw to Lizardo at third without a bounce even though the throw was offline. Still, it was an impressive show of arm strength by the former Duke Blue Devil. Sierra would have done well to take note of that in the ninth.

Wright nailed a couple of runners trying to steal. Brandon Polizzi made a nice play at second to handle a bounce throw in the dirt to tag out Fennell after he singled to center to start the sixth. Wright also picked off Kelli by making the throw to Polizzi at second who in turn made the toss to Lizardo to apply the tag at third to complete the 2-4-5 play.

The C’s had trouble with a couple of infield popups in this one. In addition to the aforementioned eighth inning mishap, Capra and Lizardo let a popup fall between them on the left side of the infield in the seventh off the bat of Slaughter to let him reach base. McAffer overcame that by striking out the side.

Vancouver had nine hits and six walks against eight strikeouts, going 2-for-9 with runners in scoring position and stranding seven runners. They were 5-for-6 in stealing bases as Kirwer and Lizardo stole two apiece while Conine swiped one. Rodriguez was the only one caught stealing.

Espada allowed four hits and a walk over six shutout innings and struck out three. McAffer matched Espada’s strikeout total over 1-1/3 innings but allowed the only run on four hits. Law pitched 1-2/3 innings of one-hit ball to finish the game out.

The C’s and Em’s go at it again at Nat Bailey Stadium for another 7:05 pm start. Rob Fai will call the game on CanadiansBaseball.com. Randy Pondler (1-4, 4.39) will get the ball for Vancouver. He’ll face fellow lefthander Brailyn Marquez (1-2, 2.36). Pondler is looking to avenge the season-opening loss to Eugene June 15. Marquez faced the C’s June 17 and allowed one run in 3-2/3 innings while striking out six. Vancouver was able to prevail with their first victory of the season.