McGregory Contreras was a home run shy of the cycle against Eugene Saturday.

The Vancouver Canadians used a trio of two-run innings to knock off the Eugene Emeralds 6-1 at Nat Bailey Stadium Saturday night. The C’s find themselves in a three-way tie atop the North Division standings with Everett and Spokane at 3-2.

Eugene starter Brailyn Marquez—the Chicago Cubs number 4 prospect according to MLB.com—lit up the radar gun with fastballs from 97-100 miles per hour but the Canadians got their timing down against the Dominican lefty in the second. Yorman Rodriguez began the inning with a leadoff walk and he would score on a triple to center field by McGregory Contreras. Nick Podkul followed by lining a single up the middle to score Contreras.

The C’s offence went back to work in the third when Tanner Kirwer blooped a single to center and Vinny Capra doubled to left to move Kirwer to third. Griffin Conine grounded out to first to score Kirwer and Contreras followed with his second straight extra-base hit by doubling to left to cash in Capra. 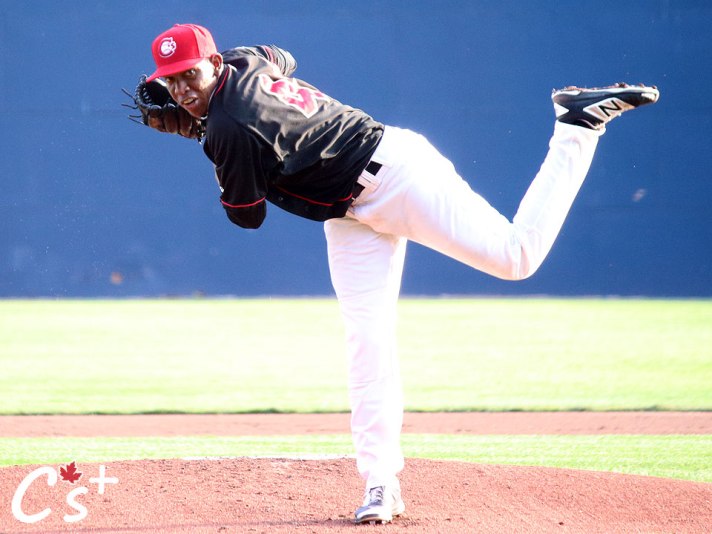 Vancouver lefty Randy Pondler retired the first nine hitters he faced but was nicked for a run in the second. Fernando Kelli and Grant Fennell both singled to right to put runners on the corners before Nelson Velazquez grounded into a run-scoring 6-4-3 double play.

The fifth inning saw the C’s add two more runs in the fifth. Velazquez got a workout in right field when Conine hit a leadoff triple before having to chase down a Rodriguez run-scoring double. Contreras plated Rodriguez with a single to left before being thrown out at second on a 7-5-4 play.

The bullpens took over from there as Sean Barry and Ethan Roberts combined for 3-2/3 innings of scoreless relief for Eugene. Vancouver’s bullpen dominated the rest of the way when newcomer Troy Miller, Joey Pulido and Cobi Johnson combined for eight strikeouts over the final three frames to nail down the victory.

Joey Pulido struck out the side in the eighth inning Saturday.

Contreras had another interesting game with the glove in left field. He was charged with an error when the ball clanked off his glove on a Jake Slaughter fly ball in which should have been the final out of the fourth inning. Rodriguez would pay the price behind the plate when he took a foul ball in the sensitive area off the bat of Luke Reynolds. Rodriguez was able to recover and finish out the game.

Contreras would make a nice running catch as he had a lot of ground to cover in chasing down a foul ball off the bat of Luis Diaz in the fifth. That helped Pondler to strand at Levi Jordan single to right at third.

Troy Miller made his professional debut for the C’s with a scoreless seventh inning. The 21 year-old from Aptos, California was signed as an undrafted free agent by the Blue Jays earlier this week. The 6-foot-4 210 pound righthander comes from the Michigan Wolverines.

The C’s hurlers gave up just six hits and one walk while striking out nine. Pondler had one strikeout and allowed just one run on three hits over six innings to win his second straight start. Miller, Pulido and Johnson combined for eight strikeouts with Miller issuing the only walk. All three allowed just one hit over their one-inning stints.

Nick Podkul reached base three times and stole his first base of the season Saturday.

The C’s totalled nine hits and four walks and struck out just four times. Contreras had the only multi-hit game by going 3-for-4 but seven different players all made it to the hit column. Nick Podkul singled and walked twice while Kirwer and Rodriguez reached base twice on a base hit and a base on balls. Podkul and Contreras also stole bases but Podkul was caught once along with Kirwer. Vancouver was 4-for-9 with runners in scoring position and left four men on base.