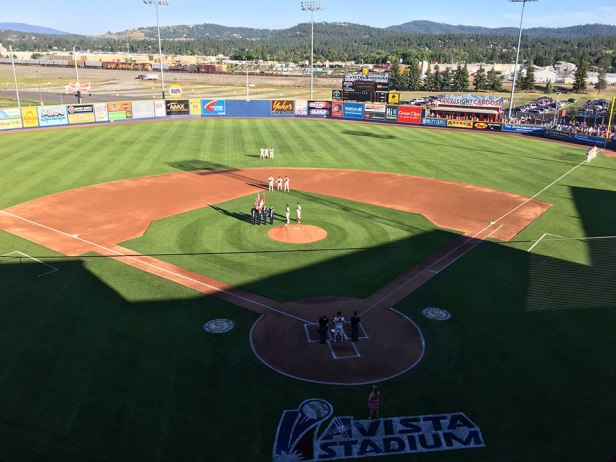 A Matt Morgan RBI single in the second combined with seven shutout innings from Dalton Rodriguez helped the Vancouver Canadians begin their seven-game road trip on a winning note as they defeating the Spokane Indians 5-0 at Avista Stadium Tuesday night. That marks the fourth straight win for the C’s over their division rivals. 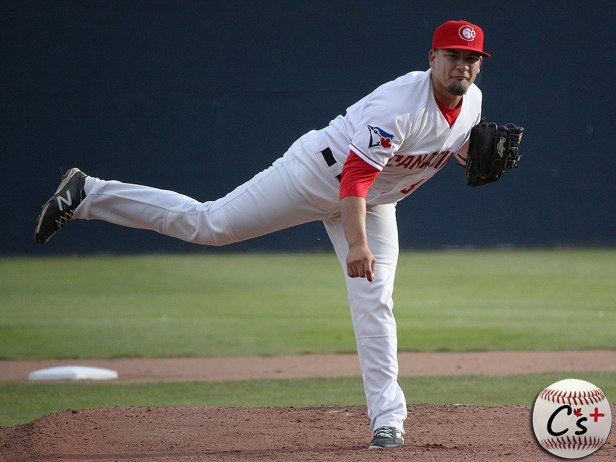 Rodriguez entered the game in the second inning in relief of Justin Dillon before giving the ball to Chris Hall for the ninth. Both Dillon and Hall pitched perfect frames with a strikeout each but Rodriguez limited Spokane to just four hits and a walk.

Half of those hits came in the second on singles by Andretty Cordero and Curtis Terry but Rodriguez got a 6-3 double play and another groundout to end the rally. Charles Leblanc started Spokane with a single in the third but Morgan threw out Leblanc trying to steal second. Cordero had a two-out single in the fourth but he would be stranded. Rodriguez had another baserunner to deal with in the fifth as the result of his lone strikeout and wild pitch that allowed Cristian Inoa to get aboard.

Cordero drew a leadoff walk in the seventh but Terry lined into an unassisted double play to Kacy Clemens at first. Leblanc would reach on an error by Cullen Large at second but Rodriguez retired the next three hitters in a row to end his outing, which saw 13 groundball outs.

Vancouver broadcaster Rob Fai lauded the defensive play of the C’s, crediting Deiferson Barreto with a great catch in foul territory at third base as well as the outfield trio of Norberto Obeso, Reggie Pruitt and Brock Lundquist running down balls that came their way. He also praised Large’s ability to hang in on a force play at second in the seventh.

The Canadians opened the scoring in the second when Clemens reached on an error by his first base counterpart Cordero. A Barreto single off Spokane starter Cole Ragans got Clemens over to third before coming home on a Morgan single to third.

Vancouver tried to add more runs in the third when Lundquist walked but he was thrown out trying to pilfer second. The fourth saw Large walk, steal second and go to third on a balk and Morgan also earned a free pass to put runners on the corners but they were left stranded.

Kevin Vicuna began the fifth with a walk, stole second and advance to third on a balk by Argenis Rodriguez but Riley Adams struck out to leave Vicuna 90 feet away. 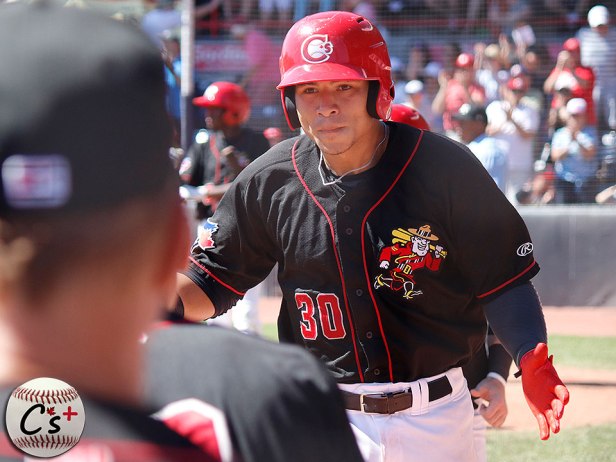 Matt Morgan reached base in all four of his plate appearances Tuesday.

The seventh inning saw the C’s break through as Morgan singled and was sacrificed over by Obeso. A base hit by Vicuna off Rodriguez scored Morgan to make it 2-0 Vancouver. Vicuna moved into scoring position with his second stolen base of the night and a throwing error by Yohel Pozo behind the plate awarded the Vancouver shortstop another 90 feet. A Lundquist walk led to Rodriguez’s exit as Spokane turned to Luis Lopez on the mound but he uncorked a wild pitch that scored Vicuna.

Vancouver would load the bases with two out in the eighth on a Barreto single and walks to Morgan and Obeso but Pruitt went down swinging. The C’s would not be denied in the ninth when Large came up with a two-run single to plate a Lundquist walk and a Clemens base hit.

Morgan and Barreto had the lone two-hit nights with Morgan walking twice for a perfect day at the plate. Only Pruitt and Adams had a tough night with the stick by going a combined 0-for-10. Vancouver was 4-for-11 with runners at second and/or third, leaving 11 of them on the pillows.

Mattingly Romanin has been promoted to the Lansing Lugnuts of the Midwest League.

Mattingly Romanin will get his first taste of full-season ball as he was promoted from the Canadians to the Lansing Lugnuts. That would help explain why Cullen Large pinch-hit for him in the fifth inning of Monday’s game against Eugene. Romanin had a walk and a single in his two plate appearances before his exit. The Burlington, Ontario native hit .308 over his last 10 games and compiled an overall on-base percentage of .442 in his 15 contests for Vancouver.

The transaction column also says lefthanded pitcher Brody Rodning—the Toronto Blue Jays’ 13th round pick in this year’s draft—has been added to Vancouver’s roster from the Gulf Coast League. The Minnesota State-Mankato Mavericks product made one appearance in the GCL, giving up two runs (one earned) with two walks and a strikeout in his first pro inning June 29.

2016 C’s reliever Griffin Glaude has been called up to New Hampshire from Lansing and 2014 lefty Tim Mayza made his Triple-A debut for the Buffalo Bisons Tuesday night with 1-1/3 innings of shutout ball that featured one hit, one walk and one strikeout.

Other notable performances included 2015-2016 outfielder Rodrigo Orozco finishing a homer short of the cycle, going 4-for-4 with a walk to help Lansing subdue the West Michigan Whitecaps 10-4 Tuesday. Also, 2015 righthander Josh DeGraaf pitched six shutout innings of three-hit, one-walk ball and struck out five to help Dunedin defeat the Lakeland Flying Tigerson the 4th of July. 2014 righty Sean Reid-Foley also had six goose eggs to get the Tuesday victory for the New Hampshire Fisher Cats over the Portland Sea Dogs.

In the majors, 2014 Vancouver shortstop Franklin Barreto hit a walk-off home run for Oakland as they defeated the Chicago White Sox 7-6 Tuesday afternoon.

The C’s end their two-game set against Spokane with a 6:30 pm start at Avista Stadium. That game can be heard on CanadiansBaseball.com. The 13-7 Canadians still hold a one-game lead over the Tri-City Dust Devils for first place in the Northwest League North Division.