The Vancouver Canadians scraped together just enough offence to support the pitching as they completed a two-game sweep of the Spokane Indians with a 3-2 victory at Avista Stadium Wednesday night. The victory marks the fifth in a row for the C’s over Spokane in the 2017 season series after a sweep at Nat Bailey Stadium in late June. 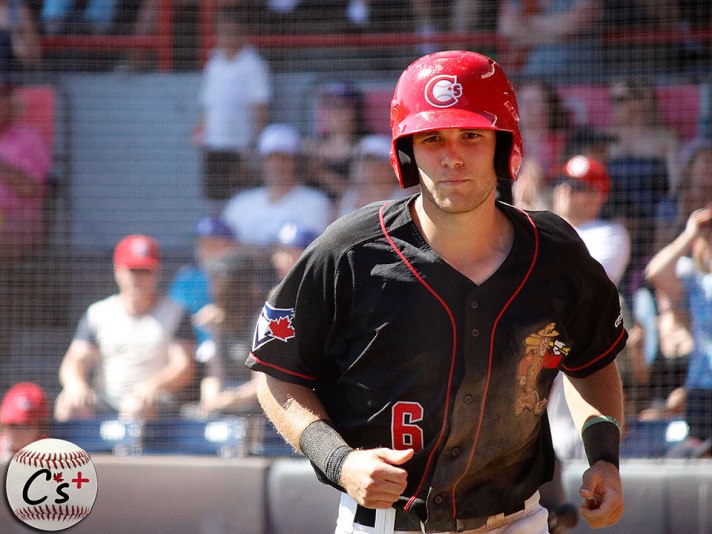 The C’s took advantage of the host team’s charity by capitalizing on three errors which resulted in two first inning runs. Cullen Large got things started with an infield single to second and moved up another 90 feet on a throwing error by Kole Enright. Large would motor home the other 180 feet on a Brock Lundquist ground ball to first in which Spokane hurler Tyler Phillips dropped the ball covering the bag as he was trying to check on Large at third. A Riley Adams infield single pushed Lundquist to second. Both Lundquist and Adams pulled off a double steal with Lundquist scoring on a throwing error by Spokane catcher Melvin Novoa.

Things were looking up for Riley Adams in Spokane Wednesday after two hits and the game-winning RBI.

Vancouver tacked on one more run in the third when Large drew a leadoff walk and came home on a two-out double by Adams on a 1-2 pitch. That double was the last time the C’s had a baserunner until the eighth inning when Brandon Polizzi got aboard on a walk to start the eighth. An errant pickoff throw by Indians pitcher Lucas Jacobsen and a Kevin Vicuna groundout to first sent Polizzi to third but Lundquist grounded out to end the inning. Bryan Lizardo had a two-out single in the ninth for Vancouver’s fourth and final hit.

Kyle Weatherly made sure those runs stood up as he gave up to just a single to Enright in the second inning in his first time through the Spokane batting order. He ran into his first jam in the fourth when Curtis Terry and Clayton Middleton had back-to-back base hits with two outs but Vicuna handled a tough hop at short on a ground ball by Enright and threw to second for the force out.

Spokane did get on the board when Novoa homered with one out in the fifth and that was followed by a single from Austin O’Bannon. Weatherly uncorked a wild pitch that saw O’Bannon get to second but Kacy Clemens—with his famous father in attendance—snared a liner at first from Miguel Aparicio and threw to Vicuna at second to double off O’Bannon for the 6-3 inning-ending twin killing.

Weatherly had a 1-2-3 sixth but served up another home run to Middleton to start the seventh. He regained his composure by fielding his position as he threw out Enright on a bunt to the mound for the first out. After striking out Cristian Inoa, Novoa doubled to left field but Polizzi—who moved from center field to left after Reggie Pruitt entered the game as a pinch-hitter for Norberto Obeso the half-inning before—threw out Novoa at third to snuff out that threat.

Bobby Eveld came through with a clutch eighth inning Wednesday to earn his first hold of the season.

After giving up multiple runs in his last three outings, Bobby Eveld got back on the beam with a clutch 1-2-3 eighth inning on a popout, a lineout and a strikeout to collect his first hold. William Ouellette saw the tying run get on base when Andretty Cordero reached on an error by Lizardo at third but he struck out the next two batters before a flyball out to earn his second save of the year.

Weatherly scattered seven hits over seven frames with a 5-0 strikeout/walk total and a 4-4 tally on groundouts and flyouts. He did it on an economical 84 pitches, 58 of which were strikes. Weatherly lowered his ERA to 2.05 and evened up his record at 1-1. Owen Spiwak overcame a 0-for-4 night at the plate to help Weatherly, Eveld and Ouellette find their way from behind the pentagon.

As for the offence, they had no hits in four opportunities with runners in scoring range and left eight men stranded.

SWXRightNow has video highlights of this game.

Outfielder Brandon Polizzi joined the team from Bluefield Blue Jays after hitting .357 with a 1.009 on-base plus slugging percentage. He had four doubles and a triple in 28 at-bats while stealing one base in his only attempt in the Appalachian League. A 35th round pick by Toronto in the 2017 draft from Cal State Dominguez Hills, Polizzi is wearing #37 for the C’s. That’s the same number Kevin Pillar wore when he joined Vancouver for its 2011 playoff run. Pillar was a 32nd round pick out of Cal State Dominguez Hills by Toronto six years ago.

SWRXRightNow also has video of Tuesday’s game, featuring Deiferson Barreto‘s tremendous catch in foul territory on the third base side despite scraping his knee. He had the night off Wednesday.

Around the minors Wednesday, 2014 C’s outfielder Roemon Fields had a hit and stole his 19th base of the season for Buffalo while 2012 reliever Wil Browning threw two scoreless innings in the Bisons loss to Scranton. Also, 2015 righthander Jon Harris posted a Game Score of 80 with seven shutout innings of three-hit, one hit-by-pitch ball. He struck out four, walked nobody and produced nine groundouts in the Fisher Cats victory in Portland. 2008 Vancouver Canadian Jeremy Barfield had a hit and was plunked by Harris. 2014 lefty Jose Fernandez and Andrew Case (2014-2015) maintained the shutout with a scoreless inning apiece. Nash Knight (2016) had a double, a triple and three runs batted, Mattingly Romanin (2016-2017) was 1-for-3 with a walk in his Midwest League debut and Nick Sinay (2016) had a hit and two hit by pitches in Lansing’s loss to West Michigan. Lefthander Juliandry Higuera (2016-2017) had three shutout innings of one-hit relief, striking out four.

2015 C’s pitcher Josh DeGraaf is all about mascot life in Dunedin while 2015 first baseman Connor Panas gives his bats very special treatment with the D-Jays which, in turn, produced this tweet from C’s clubhouse attendant Johnny Stewart.

Vancouver now has a two-game lead over the Tri-City Dust Devils for first place in the Northwest League North with a record of 14-7. They are also five games ahead of the Everett AquaSox and seven up on Spokane.

The C’s are off to Idaho to visit the Boise Hawks to begin a five-game series Thursday. Boise is one game behind the Hillsboro Hops for first place in the South at 11-10. All five games are set for 6:15 pm Pacific Time and can be heard at CanadiansBaseball.com.