The 2018 schedule for the Vancouver Canadians schedule has a number of similarities to 2017. (Schedule courtesy of CanadiansBaseball.com)

Lightning has struck twice for the Vancouver Canadians in its 2018 schedule. Their first eight games next year will be played on the same dates and at the same venues as 2017. The only difference is the 2018 season begins on a Friday instead of a Thursday.

The schedule has the C’s opening up 2018 in Eugene in a rematch of the 2017 Northwest League final June 15-19. Instead of being the hunter against the 2016 champion Emeralds, the C’s will be the hunted as the 2017 champs. After that series, Vancouver will return home to Nat Bailey Stadium for the unveiling of the 2017 Northwest League championship banner June 20 in the opener of a three-game set against the Everett AquaSox, the same club the C’s began their home slate with in 2017. 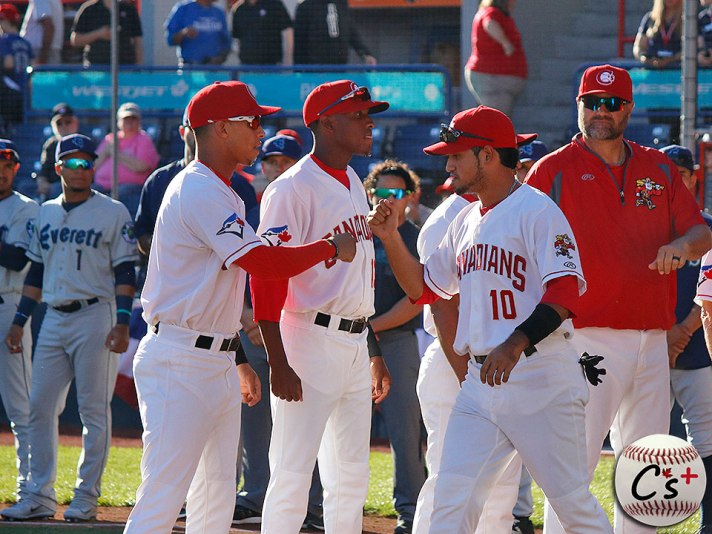 The boys of summer will return to Nat Bailey Stadium June 20, 2018 as the C’s will host the Everett AquaSox.

In another similarity to this past season, the Canadians will take on the second-half North Division champion Spokane Indians right after their series with Everett but the difference this time is the C’s will have to board the bus to Washington. The last time the club tried to play in Spokane was Game 1 of the 2017 North Division playoffs but it was cancelled due to poor air quality caused by forest fires in the area.

After the June 23-25 series at Avista Stadium, the C’s return to the friendly confines of The Nat for an eight-game homestand that begins with three games against the Tri-City Dust Devils June 26-28 before the Salem-Keizer Volcanoes appear for the Canada Day series June 29-July 3. The July 1 and 2 contests are both afternoon games at 1:05 pm.

Vancouver is back on the road for the 4th of July with the first of three games in Everett. Spokane will return to Vancouver for the first time since dropping the North Division final for a three-game series July 7-9 and that will be followed by a trip to Idaho to face the Boise Hawks for five games before heading over to Tri-City to wrap up an eight-game swing.

The C’s will conclude the first half of the 2018 schedule with five games at home against the Hillsboro Hops, the only team that had Vancouver’s number in 2017 by winning seven of 10 games that included a gut-wrenching five-game sweep at The Nat.

Vancouver will launch the second half of their campaign July 24 at home with three games against Everett before welcoming Eugene for the first time since last year’s championship cage match to wrap up the month of July.

August will see the Canadians travel to Hillsboro for a five-game cage series before the Northwest League-Pioneer League All-Star Break in Grand Junction, Colorado August 6-8. The C’s will be back on the road for five more against Salem-Keizer before finally returning north of the border for three games against North Division rivals Tri-City and Spokane August 14-19. The Canadians head to Tri-City for three more before coming back for an eight-game homestand with five against Boise and three against Everett with a day-off in between. After their August 31 home finale, the C’s conclude the regular season in Spokane over the Labour Day weekend September 1-3.

If the C’s are to grab hold of the Bob Freitas Trophy as Northwest League champions in 2018, they’ll have to do it on the road.

The Northwest League post-season begins with the best-of-three division finals September 5-7 with the best-of-five final following afterwards from September 8-12. The first two games would be hosted by the North Division winner with the final three at the home of the South Division champion. That means if the C’s make it that far, they will have to win the championship clincher in enemy territory to keep the Bob Freitas Trophy.

Steve Ewen of The Vancouver Province also has a breakdown of the 2018 schedule. 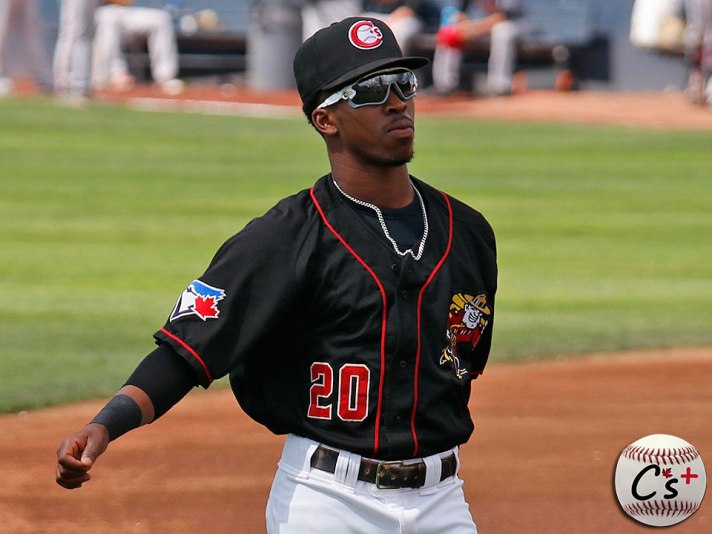 C’s second baseman Samad Taylor earned a nod by Baseball America as one of the top prospects in short-season baseball.

In my previous story about four Vancouver Canadians players earning recognition from Baseball America by being named among its Top 20 prospects in the Northwest League, there was one other C’s player who was a Top-20 prospect in short-season baseball. Second baseman Samad Taylor was rated as the New York-Penn League’s #15 prospect when he was with the Mahoning Valley Scrappers.

Taylor and left-handed pitcher Thomas Pannone were acquired by the Blue Jays from Cleveland in the trade that sent reliever Joe Smith to Ohio. The 19 year-old right-handed hitting Taylor slashed .300/.328/.467 in 120 at-bats with Mahoning Valley. The Corona, California native had six doubles, one triple and four home runs before his change of address. After a brief stint in Bluefield, Taylor batted .294/.342/.426 with Vancouver in 19 games in which he collected three doubles and two home runs. He also recorded a hit in his first three play-off games.

Now let’s look at the C’s around the Twitter-verse.

Nate Pearson, for me, jumps to the front of the @BlueJays pitching prospects list, over Reid-Foley, Greene, Zeuch, all of ’em. https://t.co/IvCztXu6IV

Catch a Nate Pearson @vancanadians start this summer? Learn how the Blue Jays manage their pitching prospects in this @LottOnBaseball story. https://t.co/SUvu5SON98

Catch a Nate Pearson @vancanadians start this summer? Learn how the Blue Jays manage their pitching prospects in this @LottOnBaseball story. https://t.co/SUvu5SON98

Blessed to have another season under my belt🙏🏾 2017 will be one to remember for sure! I thank the Lord every day for the opportunities he’s given me, but now it’s time for some rest and get charged up for 2018!!! pic.twitter.com/HWKB8HGnyr

TJ Zeuch had a perfect outing, retiring all 9 men he faced in dominant fashion. Andrew Case had a pair of scoreless outings….

Reasons you should vote for anyone else for Top Relief Pitcher: 0.00

Bad news for the father of C’s 2016-2017 infielder/outfielder Mattingly Romanin as his father Mal Romanin was let go by the Toronto Blue Jays. It was a tough day as 20 people received pink slips, including digital marketing manager April Whitzman, a terrific ambassador the club as she was the MLB Fan Cave Blue Jays representative and promoted them extensively through her Twitter account and that of her cat Jose Meowtista. It’s the latest in a string of questionable firings by the Mark Shapiro administration that included the ousting of C’s manager Rich Miller despite winning Northwest League manager of the year honours along with a league championship.

It sucks to see good people lose their jobs. Combined with the fact the club announced a raise in ticket prices despite a debacle of a season, it makes me question why I cheer for this club. I guess I can still support the troops on the field but not the ones who are giving the orders.

These developments have me wondering about the future of the Blue Jays-Canadians affiliation as their Player Development Contract is set to expire at the end of the 2018 season. With the field at Nat Bailey now in top condition, there is no reason why a four-year extension should not be signed to cement the relationship between Canada’s professional ball clubs. PDC’s are usually signed in two- or four-year increments and it was a two-year deal the Shapiro administration agreed to last time with the C’s, unlike the four-year agreement that was agreed to when Alex Anthopoulos was running things. One would think it’s a no-brainer but I wonder if the brass would prefer to have all of its affiliates in the Eastern Time zone again and have a minor league entry in the New York-Penn League. A decision should be made by the time the C’s hold its Annual Hot Stove Luncheon in January.

Bummer. Mal busted his ass not only for the Jays, but the media as well & fans were better served because of it. Diligent, stalwart, no BS. https://t.co/UpDmd8RzUq

If you’ve dealt with Mal Romanin even just once, I promise your heart sank at that news…that is a good dude, who was great at that job.

After the purge of Canadians, Ohio would seem a logical place to look, right? https://t.co/1pU6eIcKJA

After the purge of Canadians, Ohio would seem a logical place to look, right? https://t.co/1pU6eIcKJA

Mal was the best. Balanced service to the club and to the media, sometimes a tough task. Went above and beyond to fulfill reporters’ needs. https://t.co/4FFKndVDG3

Heartening to hear the kind words being expressed by the Toronto sports media, for my buddy Mal Romanin (and his colleagues).

Thank you, #BlueJays fans, for helping me reach my dream. 👏

While I’m a free agent now, I can’t wait to see what comes next! 👀 pic.twitter.com/Vqn1lS5mRt

From the student ranks to pro champs in year one! 🏆

Check in on our 2017 Draft class from Instructional League: https://t.co/RPC2ng13ed pic.twitter.com/1wkIgNpnJ4

Very cool, this franchise is off to a great start on and off the ice. https://t.co/Hon0S51IN2