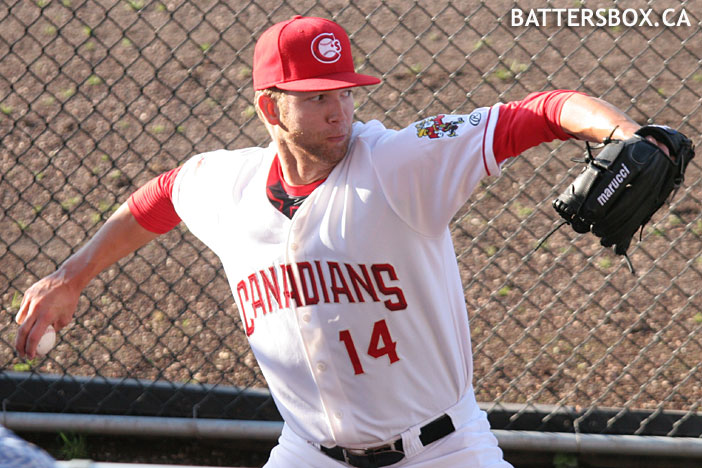 Two players who wore number 14 for the Vancouver Canadians made their major league debuts on the very same night in 2019. September 3 will go down as a day that 2016 C’s right-hander T.J. Zeuch and 2014 first baseman Ryan McBroom will never forget.

The Toronto Blue Jays called up Zeuch to make his maiden voyage on a major league mound in Atlanta with four innings of relief. A dozen days later, the former first round pick from the University of Pittsburgh collected his first MLB win against the New York Yankees at the SkyDome with 5-1/3 innings of three-run ball, striking out five. Though he lost his last two appearances, Zeuch struck out 20 batters in 22-2/3 innings and posted a 4.76 earned run average with the Jays.

After being sidelined with a lat strain before 2019 Spring Training, Zeuch made a couple of tune-up appearances with Dunedin in June before heading up to Triple-A Buffalo. The 6-foot-7 right-hander from Mason, Ohio won his Herd debut June 22 but endured an up-and-down season before tossing a no-hitter in Rochester August 19.

The 24 year-old Zeuch attributed his late-season improvement to finding his 2018 form of throwing quality pitches, cutting down on his walks, generating weak contact and sticking to his routine between starts according to this story from Alexis Brudnicki of BlueJays.com.

A groundball pitcher who is not considered to have a plus pitch in his arsenal, Zeuch told Brudnicki it’s a case of executing his game plan, “If you try and worry about striking guys out or trying to not give up a hit, that’s when you really get into trouble and you leave pitches in the zone that are going to end up getting hit hard. When I’m relaxed is when I’m able to do my best.”

Zeuch employs a sinker, changeup and curve according to BrooksBaseball.net with velocities averaging 92, 83, 83 and 76 miles per hour respectively. One thing to watch for from Zeuch is his ability to keep the ball on the ground. During his stint with the Jays, his groundball rate was just over 47 percent, a drop of 10 percent from his time in Buffalo. That 47 percent mark represented the first time Zeuch’s wormkiller rate checked in below 50 percent.

Also on September 3, 2019, McBroom was called up by the Kansas City Royals and he singled against Detroit lefty and 2012 Vancouver Canadian Daniel Norris.

McBroom was Toronto’s 15th round pick in 2014 and made it to Double-A New Hampshire before being traded to the New York Yankees for utility player Rob Refsnyder in July of 2017. The former West Virginia Mountaineer split 2018 between Double-A Trenton and Triple-A Scranton/Wilkes-Barre before hitting .315 and slugging a career-high 26 home runs with the RailRiders in 2019.

The Fredericksburg, Virginia native told the Kansas City Media upon his arrival that his plate discipline was the key to his success, “It all reverts back to being able to hit a fastball and lay off things that are out of the zone, being able to hit the ball to all fields. It’s just experience, it comes along with playing the game.”

The Yankees traded the right-handed hitting McBroom to the Royals August 31 for international bonus pool money and future considerations. Kansas City had drafted McBroom after his junior season with the Mountaineers in the 36th round of 2013 but he opted to return to Morgantown for his senior year.

Primarily a first baseman with Vancouver during his 2014 pro debut, McBroom made 10 starts in left field with Lansing in 2015 in a season that saw him win Midwest League Most Valuable Player honours. He made four more appearances in left with Dunedin 2016 but played first base exclusively with New Hampshire before being dealt to the Yankees.

In his first full year in the Bronx farm system, McBroom made 34 appearances in right field and nine in left to nearly match his 45 games at first with Scranton/Wilkes-Barre after appearing twice in right field with Trenton to go along with 20 games at first. The outfield remained part of McBroom’s defensive repertoire with 41 games there and 62 games at the first base bag.

When he suited up for the Royals, McBroom was stationed more in the outfield than at first base with 14 games in the corners, 12 of them in right. Kansas City is obviously intrigued with the 28 year-old’s potential by giving him more responsibility in his defensive portfolio so he can showcase his batting skills. McBroom batted .293 with a .361 on-base percentage in 75 at-bats with the Royals. The only negatives were a lack of power with just a .360 slugging percentage and a strikeout rate of just over 30 percent.

Though he did not homer during his September trial, McBroom had a three-game hitting streak to begin his career and strung together another streak of seven in a row with a base knock, including a career-high three hits in Minnesota September 20. In total, he had a hit in 16 of the 23 games he played for the Royals.

Best of luck to Zeuch and McBroom in their major league careers, whenever they resume.