Here is one from the archives. I had a chance to chat with Vancouver Canadians outfielder Brandon Polizzi prior to their game against the Salem-Keizer Volcanoes on August 12 at Nat Bailey Stadium. He was a month into his season in Vancouver after getting called up from the Bluefield Blue Jays in early July. Polizzi started his pro career in the Appalachian League after being selected in the 35th round of the 2017 draft by Toronto out of Cal State-Dominguez Hills, the same school that 2011 C’s outfielder Kevin Pillar attended. Polizzi was a first-team All-CCAA (California Collegiate Athletic Assocation) All-Star after batting .381 with 14 stolen bases for the Toros.

I first asked Polizzi about how he was adjusting to his first year as a pro.

“Every season, everybody has peaks and valleys. Right now, I’m in a little valley but I’m starting to rise up. (I still have) confidence. I know I can play this game. I know I can hang with these guys. I’m not overmatched or anything. I’m just out here having fun.”

Polizzi on what he is working on in the batter’s box.

“Just seeing the ball. Work on hitting line drives. I’m not the type of guy that’s going to leave the yard. I’ll get one, maybe two (homers) but my game is hit the ball on the ground, hit line drives in the gap. I’m a gap to gap guy”.

Polizzi on his style of game.

“I’m a guy that can run. I play the outfield. I’m supposed to be tracking down balls and throwing guys out. Bunting is a big part of my game. If I’m 0-for-3 and if I’m hitting line drives at everybody and if (the infield is) going to play you back, I’m going to drop a bunt and get on first and help my team score. That’s my job, get on first anyway I can.”

Polizzi on who he would compare his style of game to.

“I don’t like to compare myself to anybody really but I’d have to say Kevin Pillar. I don’t like losing. I play this game hard. Even during our little bunt practice we were doing, I’m was running 110 percent because that’s who I am. Give it 110 percent every single time.”

Polizzi on Pillar’s legacy at his alma mater.

“He is still the face of Cal State Dominguez Hills. Nobody can take that away from him. He’s absolutely the guy. If you go to Cal State Dominugez, you better know who Kevin Pillar is.”

Brandon Polizzi was called up from Bluefield to Vancouver on July 4.

Polizzi on switching jersey numbers from #37—the number Pillar wore for Vancouver during its 2011 Northwest League championship run—to #2.

Polizzi wore #4 during his college days but that number in Vancouver was taken by manager Rich Miller.

Polizzi on how he got started playing baseball.

“My dad just said, let’s go play something. Alright, so I’m playing baseball, just playing catch with him and I just fell in love with it. I used to pick up the little balls at Chuck E. Cheese where you can just throw all over in the jungle pit, or whatever they’re called. My dad bought me my own little jungle pit for my bedroom when I was two or three (years old) and I used to throw those things around so I was always doing baseball motions so I just fell in love with baseball.”

Polizzi on who helped him out during his career.

Polizzi on winding up at Cal-State Dominguez Hills.

“I had the interest of bigger colleges. I had Cal State Fullerton, Long Beach and a couple of other top D-1 (Division 1) schools. But I was actually committed to a school called Doan, a little NAIA (school). I was verbally committed.

I sat down, talked with him. Absoultely fell in love with that guy. That guy is one of the best baseball minds I’ve ever been around. I said, ‘Yeah, I’ll come and play,’ so that’s what got me to come to Dominguez Hills”.

Brandon Polizzi split time in center field, second base and shortstop with Cal State-Dominguez Hills in 2017 before playing in left and right field with Vancouver.

Polizzi on when he began playing in the outfield.

“I grew up as an infielder. I was always a shortstop, second baseman. I’ve only been playing the outfield for two to three years.”

Polizzi on his outfield preference.

“Center field, that’s my spot. I like running around knowing I got left and right. I can play anywhere, left field, right field, middle infield. I’m a versatile guy.”

Polizzi on playing in the outfield at Nat Bailey Stadium.

“The ball (doesn’t) fly real well in left field. The ball definitely doesn’t go out in center. It’s not that hard. I just go out there, tracking balls down and having fun.” 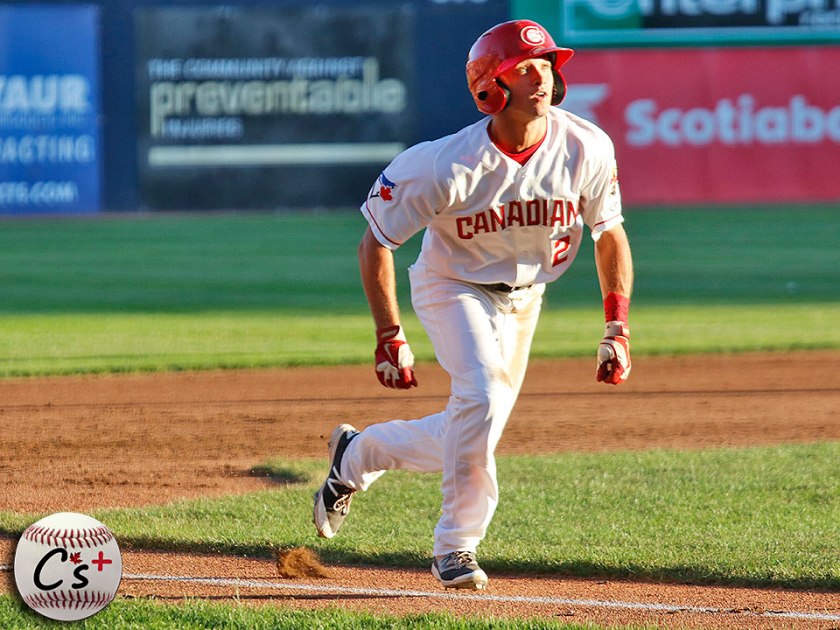 Polizzi on his draft day experience.

“I was actually sitting at home. I got some friends texting me and asking me, ‘hey, have you been drafted? No, not yet’ so I’m just sitting there. I had about eight teams call me after the 10th round, going ‘Hey you know, expect your name to be called early’, I said ‘Okay’, so I got about 20 phone calls from eight teams (saying), ‘Hey, sit tight, we’re going to get you, sit tight.’ So I’m sitting there and going, ‘Okay, is it going to happen? Sooner or later, right?’

The 30th round comes along and I’m sitting there (thinking), ‘Okay, I’ve only got 10 rounds left,’ so I’m squirming a little bit. It went down to two teams, the Royals and the Blue Jays.

So I’m sitting there, my brother is in the room. He goes, ‘Oh crap!’ He got to know before me and the next thing I know, my phone goes off. ‘Brandon Polizzi, 35th, Cal-State Dominguez Hills, 35th round by the Blue Jays’ It was an exciting moment for my family and I. They’ve been on this journey with me. This is not just my dream but their dream as well. Everything they’ve done for me, I couldn’t be more than grateful for the parents I have.

Polizzi on his father’s premonition he would wind up in the Blue Jays organization.

“I talked to Kevin before the season started. In February he came out just before spring training. He came out to the school. I just got done working out by myself. I know who that is. I walked up to him and he goes, ‘Who’s the center fielder?’ ‘That’s me’, ‘Okay, good. You’re holding the fort down, keep doing a good job’

I’ve talked to him. My agent is really close friends with him so obviously I know a lot about Kevin Pillar. I’ve been picking his brain during the off-season and how on how he prepares for the season and all of that good stuff.”

Polizzi on the C’s winning the first-half North Division championship.

“It took me back to last summer when we won the first half and the second half for the Wisconsin Rapids (when) I played in the Northwoods League. That’s basically what this is. Maybe a couple of more games here but it was a blast. It prepared me for this season.”

Polizzi would get to celebrate one more time in 2017 as he was in left field when the final out was recorded in the fourth and  clinching game of the Northwest League championship against the Eugene Emeralds at Nat Bailey Stadium.

My thanks to Brandon Polizzi for this interview.