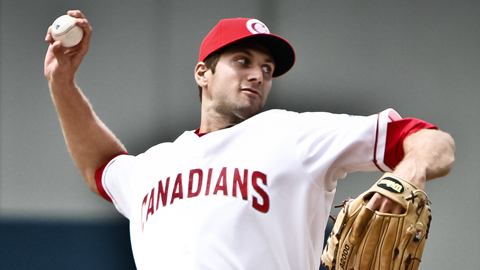 A couple of former Vancouver Canadians pitchers who played a role in their first two Northwest League championships decided to call it a career over the off-season. 2011 righthander Blake McFarland and 2012 righty Wil Browning made the difficult decision to pursue other ventures.

McFarland was a free-agent signing by the Toronto Blue Jays in 2011 after spending his junior and senior college years with San Jose State University, where his grandfather John Oldham pitched. The San Jose native had wanted to play football and baseball at San Jose State but the coaches would not allow him to so he wound up going to West Valley College and Santa Barbara City College where he decided to concentrate on baseball full-time before joining the Spartans where he obtained his psychology degree.

McFarland made his pro debut in Vancouver in 2011 and got the victory in his first appearance June 19 with four perfect innings of relief at Nat Bailey Stadium. Justin Nicolino began the game with four perfect frames before the no-hit bid was broken up on a double by Marc Bourgeois but he was cut down at third on a 9-6-5 relay from Nick Baligod and Shane Opitz to Matt Johnson. In what could have been a combined no-hitter, Nicolino and McFarland had a one-hitter instead.

After beginning his career with 7-2/3 shutout innings over his first two pro appearances, McFarland got his first starting assignment at home against the Everett AquaSox June 30 and allowed just one run over six innings to pick up the win. He had a 0.68 earned run average after that outing but he was roughed up over his next two starts on the road. A return to home cooking helped McFarland get back on track as he spun six shutout frames against the Boise Hawks July 17. He followed up with a one-run effort over six innings to pick up another victory in Eugene against the Emeralds July 22.

He encountered another rough stretch by losing three starts in a row but was one out shy of being credited with two quality starts to end the regular season in which he posted a 6-7 record with a 5.32 ERA. He pitched twice in the post-season and was saddled with the Game 1 loss vs. Eugene in the semi-final and the Game 2 loss against Tri-City in the final but he got to celebrate the C’s first championship in its short-season history.

McFarland endured a rough season in 2012 with the Lansing Lugnuts in which he finished with a 5-6 record and a 5.68 ERA after moving to the bullpen full-time. He began to find his stride with the Dunedin Blue Jays in 2013 when he saved 18 games and struck out 49 batters in 46 innings, the first time he averaged over a K an inning after whiffing just 34 hitters in 64-1/3 innings with Vancouver and 73 batters in 90-1/3 innings with Lansing. He would earn an All-Star berth in the Florida State League All-Star Game that year.

The 2014 season saw McFarlane split time with the D-Jays and the New Hampshire Fisher Cats where he recorded a composite mark of 2-2 with a 2.89 ERA and 73 K’s in 62-1/3 innings. The arrow continued pointing up as he pitched in New Hampshire and Buffalo where he rung up 72 batters over 57-2/3 combined innings. That season convinced the Jays brass to add him to the 40-man roster.

However, shoulder problems forced McFarland to miss all of 2016 and limited him to just 6-1/3 innings in New Hampshire in 2017. He began last year with four straight scoreless appearances and allowed just one run over two innings May 4 over what turned out to be his final appearance on the mound. 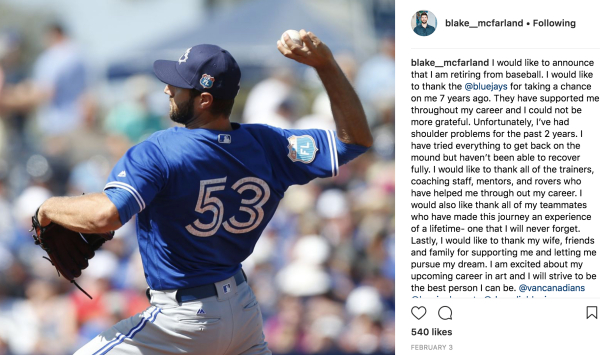 On the bright side, McFarland will be able to focus more of his efforts towards his recycled material arts career. You can check out his impressive work at BlakeMcFarland.com and on YouTube. 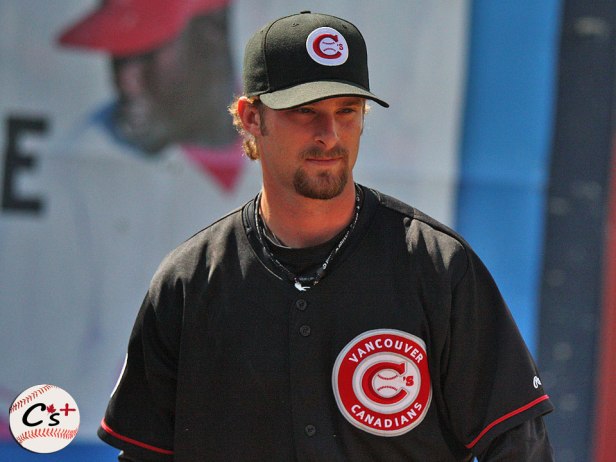 Wil Browning had two wins and a hold in the 2012 post-season for Vancouver.

Wil Browning began his pro career in 2012 after signing as a free-agent with the Jays out of the University of Louisiana-Monroe. The sidearming reliever got his feet wet with the Gulf Coast League Blue Jays where he posted a 1.35 ERA over seven appearances and had an ERA of 0.82 with four saves over 10 games with Bluefield before being summoned to Vancouver in the latter part of August.

Browning made his Northwest League debut in Salem-Keizer August 19 and earned a hold against the Volcanoes with 1-2/3 innings of shutout ball. Four of his five appearances with the C’s in the regular season were scoreless and he would pitch in all five of their playoff games.

Browning earned the Game 1 victory in the semi-final against Everett by retiring the only hitter he faced to end the top of the eighth inning before Kellen Sweeney drove in the game’s only run with an RBI single in the bottom half. The Sallis, Mississippi native would pick up a hold with a scoreless eighth inning in the C’s come-from-behind 10-7 win over Boise in Game 1 of the Northwest League final. He bounced back from a blown save in Game 2 by picking up the win in the deciding Game 3 with 2-1/3 innings of relief as the C’s scored a converted touchdown in the eighth for a 12-9 win at Boise Memorial Stadium.

Browning continued to climb the minor league ladder in 2013 where he earned Mid-Season All-Star League honours with Lansing and Dunedin after a combined 2.03 ERA in which he struck out 81 batters over 62.0 innings. The 2014 and 2015 seasons saw Browning spend time in Dunedin and New Hampshire with the majority of it coming in Dunedin. He captured Florida State League post-season honours in 2015 after a microscopic 0.78 ERA with the D-Jays after marks of 1.02 and 1.65 in the two previous previous. Those numbers helped Browning land a spot on Dunedin’s All-Time Team at the end of 2017.

The 2016 season saw Browning spend the majority of it in New Hampshire and kept his ERA below 2.00 again with a 1.94 mark. That earned him a cup of coffee with Buffalo to end the year.

Buffalo was where Browning would spend all of 2017 and despite getting the win in three of his first four appearances of the year, he would scuffle against International League batters as they hit .300 against him. Although he struck out 57 batters in 57-2/3 innings, his ERA was 6.55 over 39 appearances and 36 walks ballooned his WHIP to 1.855. His final game was in Syracuse September 2 in which he allowed a run in two-thirds of an inning. Browning’s bio page indicates his retirement date was February 5.

All the best to Blake McFarland and Wil Browning in their future endeavours and a thank you for their contributions to the C’s winning back-to-back Northwest League titles to begin their affiliation with the Blue Jays.