Justin Maese was a third-round pick of the Toronto Blue Jays in the 2015 draft out of Ysleta High School in El Paso, Texas.

Four members of the Lansing Lugnuts are going to the Midwest League All-Star Game, two of them from the 2016 Vancouver Canadians. Former C’s righthanders Justin Maese and Geno Encina will join infielders Vladimir Guerrero Jr. and Bo Bichette on the East Division roster in Midland Tuesday, June 20.

After ending April with an earned run average of 5.79, the 20 year-old Maese nearly chopped that figure in half with a 3.03 mark in May. He has three complete games so far this season, albeit two of them were six and seven innings respectively. His best outing came May 11 in a nine-inning effort in Kane County against the Cougars. His most dominant effort was a career-high 12 strikeout performance against the Lake County Captains May 24.

Maese has won his last four decisions in a row to boost his record to 5-2 to go along with a 4.24 ERA. His FIP and xFIP suggest he is better than with marks of 3.42 and 3.37. The El Paso, Texas native has struck out 54 batters and walked 20 over 63-2/3 innings. When Maese will be able to add to his innings total is in doubt right now as he is on the 7-day disabled list, retroactive to May 30. 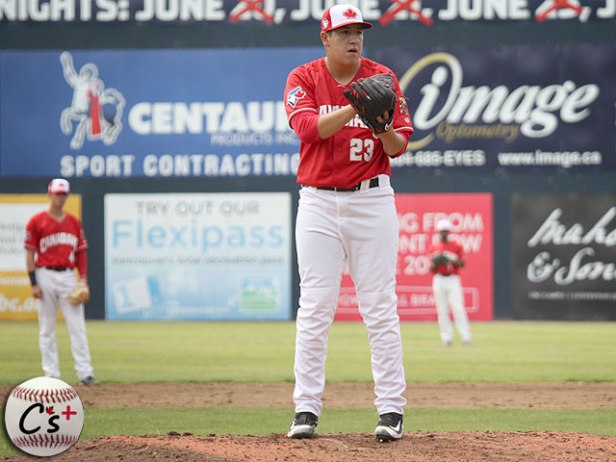 Geno Encina was taken in the 18th round of the 2015 draft from the University of Incarnate Word.

As for Encina, he has won two of three decisions with a 2.75 ERA while striking out 34 batters and walking 12 over 36 innings. As noted by Lansing play-by-play man Jesse Goldberg-Strassler, the 22 year-old from San Antonio put together a 30-inning streak in which he did not allow an unearned run which allowed to keep his ERA at zero for the month of April.

Of his 39 appearances in the pros, all but five in relief, Encina has pitched less than two innings just six times.

In an April interview with Goldberg-Strassler, Encina talked about his “risk it for the biscuit” mentality on the mound which was in evidence during his Lugnuts debut last August 31 .” Encina used a 3-2 slider to strike out the first batter he faced as a Lansing Lugnut, surprising not just Bowling Green hitter Samm Wiggins but his pitching coach Jeff Ware.

“You always got to be confident with your pitches in any count so that’s why I feel I have something to go, especially on a full count, ” Encina said.

When Encina was drafted by the Blue Jays, the team agreed to pay for his final two semesters of school at the University of Incarnate Word where he is pursuing a degree in journalism. He said he was a back-up sports editor at the University where he wrote football stories during his freshman year. The story Encina is hoping to write one day is about his successful journey to the major leagues.