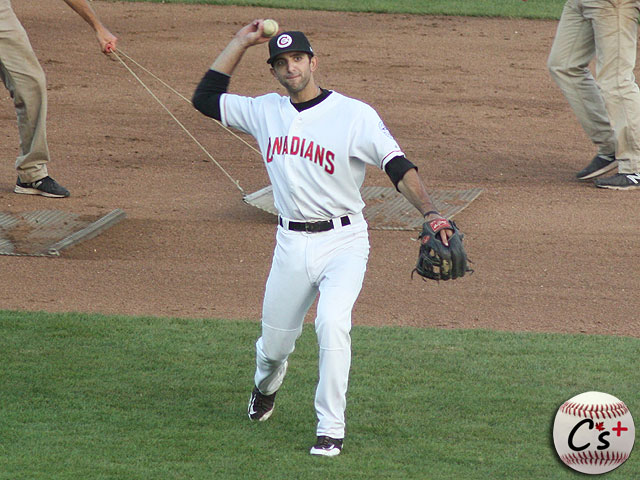 Jason Leblebijian was named the International League’s Batter of the Week June 4.

Leblebijian captured International League Batter of the Week honours for the week of May 29-June 4. The product of Bradley University batted .481 during that period which included a two-home run game against the Charlotte Knights May 29. Currently, he’s hitting .310 and slugging .579, placing him fourth in the IL while his .379 on-base mark puts him seventh. The right-handed hitting Leblebijian has 11 doubles, three triples, seven homers and 38 runs batted in. He’s also 2-for-2 in the stolen base department.

Kim says the development staff has liked what they’ve seen from the 26 year-old native of Arlington Heights, Illinois.

“Lebby is a great story and definitely somebody that we’re excited about right now. Lebby goes from High A last year to Double-A and then the Venezuelan Winter League and obviously putting together a nice season so far. Probably confidence has been a big factor, the ability to consistently bounce back from the good performances or the bad and be the same, consistent demeanour and makeup every single day. And I think on the offensive side, a more consistent approach and a more defined plan up there. Really, Lebby’s made big strides this season and we’re really excited about what he’s doing.”

Kim also likes how Leblebijian is developing off the field.

“I think anybody here could attest to who Lebby is, the work ethic he has, the teammate he (is). Those are things that from Ross Atkins to (vice-president of baseball operations) Ben Cherington and (player development advisor) Eric Wedge and (director of high performance) Angus Mugford and myself…As a group that (is what) we’re preaching as being important and Lebby is a great example of how those values and that work ethic can really help you be the best you can be.”

Christian Lopes is hitting .375 so far in the month of June for the Buffalo Bisons.

Lopes is heating up again with the bat after a slow month of May that saw him hit just .218. The 24 year-old from Huntington Beach, California is hitting .423 over his last 10 contests to put his slash line at .257/.322/.355 with 10 doubles, one triple, two home runs and 19 RBI.  Lopes is carrying an eight-game hitting streak that included a home run May 29. He has also stolen 10 bases in 13 attempts.

Kim says Lopes is doing the right things at the plate.

“Lopey.  Again, a guy who started in High-A last year and you look at what he’s doing right now and that’s been another good success story for himself but also for player development here. He’s staying on that fastball, he’s committed to his approach as well and you’re seeing the results on the field.”

Dwight Smith Jr. has been called up twice by the Toronto Blue Jays this season.

Kim says he sees a bright future for the son of the former major leaguer.

“He has the makeup and the ability to be a major league baseball player. He could always hit and he always had a good approach to his work ethic and his routines and he’s really putting it together this year after being in Double-A for a couple of years. Now he’s finally got the opportunity here in Triple-A and has produced. Again, another example of somebody who comes to work everyday, has a positive mindset and it’s paying off right now.”

Smith has already had two cups of coffee in the majors but Leblebijian and Lopes are not that far away from getting their first taste.