Griffin Glaude has 10 saves over his 50 professional appearances.

Griffin Glaude has had to show the heart of a lion and a lot of fight to get to where he is today in baseball. Those traits are only fitting considering he pitched for the Lyon College Fighting Scots in the American Midwest Conference.

Glaude was passed over in the 2015 draft but the Toronto Blue Jays signed the righthander to a free-agent contract after he led the nation with a miniscule 0.56 earned run average to help him secure Second Team NAIA All-American honours. The Beebe, Arizona native told Lansing Lugnuts broadcaster Jesse Goldberg-Strassler in an interview last month that dealing with adversity helped him grow as a pitcher in college.

“In high school, I did really well and it was that first time in college when I hadn’t really failed yet as a baseball player and I was just really learning to overcome that”, Glaude said. “It took me a couple of years but I think being able to overcome that really helped…Everything just kind of clicked my last two years there and I had a great experience while I was there.”

Glaude started his professional journey with the Gulf Coast League Blue Jays where he experienced the highs and lows of the game very quickly. He took the loss in his first appearance June 22 but notched his first professional victory in his next outing June 27. His first save in the pros came on the 4th of July. He pitched between two and three innings over his first nine appearances. Glaude would go on to convert four saves in a row and five of seven overall in the GCL before getting a one-game cameo in Dunedin September 5. He finished the year with a 3-1 record, a 2.64 ERA and a 40-8 K/BB total in 30-2/3 innings.

The 2016 season saw Glaude get off to a great start with the Vancouver Canadians, recording five scoreless outings covering seven innings. His first victory in a C’s uniform was July 19 in Spokane when he spun three shutout innings against the Indians. He converted his first save against the Tri-City Dust Devils July 29 and he would convert four more in a row to earn a brief call-up to Lansing. Glaude gave up five runs in two-thirds of an inning against the Dayton Dragons August 22 but he would get twice the number of outs in his next outing against the Lake County Captains August 26. 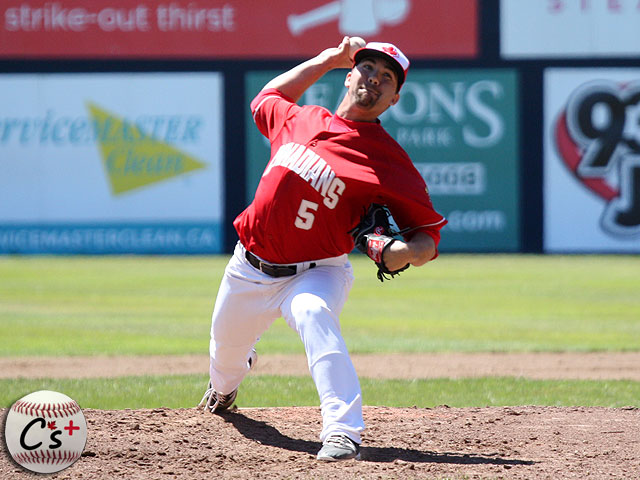 Griffin Glaude shared the team lead with five saves for Vancouver in 2016.

Glaude would return to Vancouver to finish up the year where he went 2-1 with a 2.63 ERA. He rung up another 40 batters over 34-1/3 innings but he walked 17. Though it was a struggle for the C’s on the field, Glaude enjoyed pitching at Nat Bailey Stadium.

“It was a blast. Obviously playing with the fans you get each and every night, there’s nothing like it. It’s second to none in minor league baseball. It’s a cool area to be in”.

After getting married in the off-season, the 5-foot-9 Glaude started 2017 in Lansing and he has had his ups and downs. He earned his first Midwest League win against the Burlington Bees May 7 with five strikeouts over a career-long four shutout innings, reaching his 100th career strikeout in the process. However, he would find himself on the disabled list and would miss the rest of May. Glaude has returned with two scoreless appearances so far in June 2 and June 7, earning his second victory of the year in the latter contest.

Glaude is trying to whittle down his ERA, which now stands at 4.84. What’s hurting him this year is the long ball as he has given up four home runs, leading to a gopher ball rate of 13 percent, over 10 percent worse than his Vancouver performance. He’s not getting nearly as many groundballs with only 30 percent of the balls put into play staying in the infield, representing another 10 percent swing in the wrong direction. Conversely, his flyball rate is above 48 percent, nearly up seven percent from his time with the C’s. He’s getting hit harder as well by giving up a line drive rate of 21 percent, a four-percent hike from 2016. He is maintaining a decent strikeout rate of nearly one an inning with 21 whiffs in 22-1/3 innings.

Glaude throws a fastball, slider and a changeup. He’s working on his fastball command and his off-speed stuff, which he is gaining more confidence in.

“The slider has been a big pitch for me over the last few years and really like the last year or two, the changeup is really coming a long way,” Glaude said. “That’s one of my favourite pitches to go to now and it really seems to be working this year.”

Glaude says his changeup got better by working on it through catching drills.

“I just started throwing it playing catch and just getting the feel for it because it’s a lot different grip than other pitches,” Glaude said. “(Playing catch) is a good time to really focus and try to work on something because as a pitcher, you only have so many throws in your arm each and every day so if you can take advantage of the time you’re warming up and work on something, that’s the best time to do it.”

Glaude feels that being able to relax on the mound is important.

“I think a lot of it is as pitchers, we tend to put so much pressure on ourselves. When you go out there and have fun, you don’t realize how much easier the game gets. How much easier and fun pitching is. Obviously, just getting ahead with strike 1. It makes each batter you face a lot easier. It took a couple of years to realize that. Still today, I want to strike every guy out but being able to get guys out earlier in the count makes life a lot easier.”

Now 25 years old, Glaude says he is focused on improving each and every outing and trying to move up the minor league chain as quick as possible. To do that, he will try to restore the roar from his days at Lyon College.